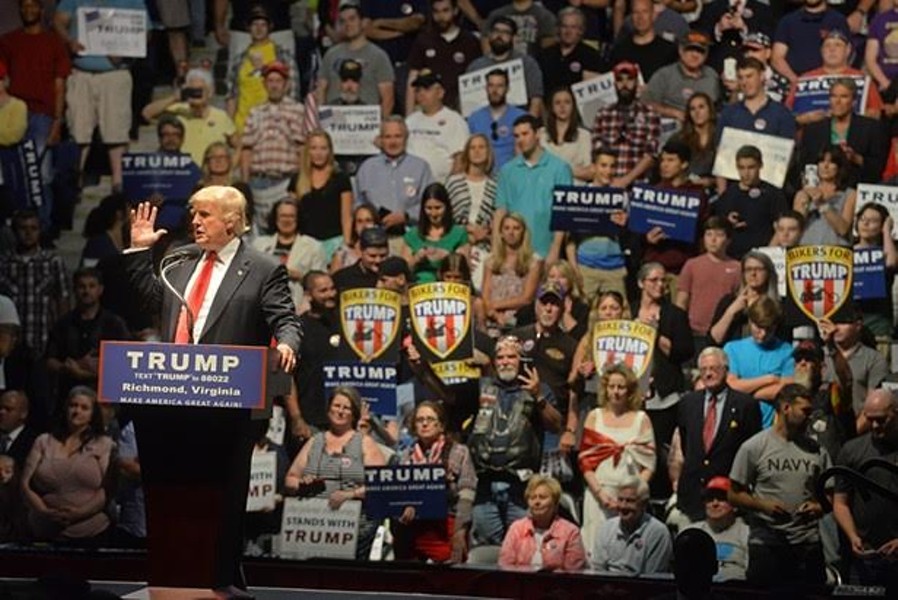 Scott Elmquist The Trump rally at the Richmond Coliseum.
<p>UPDATED

The American Civil Liberties Union of Virginia is protesting what it says is improper behavior by the Richmond Police Department during a June 10 rally for Republican presidential nominee Donald J. Trump.

The letter, addressed to Police Chief Alfred Durham, says that officers misinformed protestors, taped over their badge numbers, corralled protestors but not Trump supporters and failed to keep the two groups apart after the rally at the Richmond Coliseum.

The author of the letter, ACLU Virginia director Claire Guthrie Gastanga, also says her group is concerned about police behavior during a July 18 Black Lives Matter protest in Richmond. “Protestors were told they could not stand still on a sidewalk,” she says.

Police department spokesman Gene Lepley said that the police chief “will respond but in private.”

In her letter protesting the Trump rally, Gastanga wrote that protestors had to “keep moving” while others, including panhandlers and religious people, were given no such instructions.

Protestors were corralled into a “protest zone” while Trump supporters were allowed to move about freely, she says.

State Police, FBI and the Secret Service helped provide. Five people were detained and one was arrested at the Trump event.

Gastanga also says that that the ACLU has “pretty strong concerns” about how police handled a Black Lives Matter protest on July 18. She says that police told protestors that they could not stand still on a sidewalk and had to keep moving.

Thirteen people were arrested after blocking Interstate 95 near downtown.

There was confusion about her letter. It had been posted on the ACLU website July 20 but was taken down shortly afterwards.

“We wanted to make sure we have our facts right,” says She said the letter will be reposted.