Girl fights bring out the pink, black and blue. 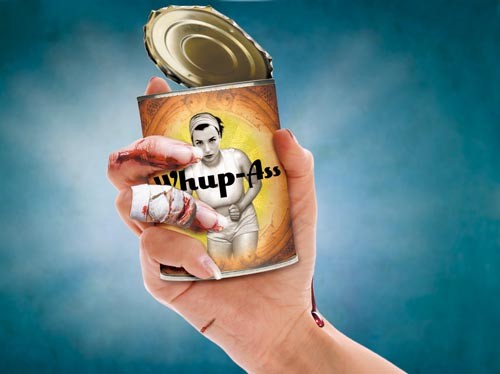 Women have been known to draw blood in defense of their young, but their cold beer? Indeed. Swing-out sisters are cropping up all over the place, more often than you'd think. It's not just for Snooki and Lohan anymore. When the lights go down in the River City, sometimes the claws come out.

It's your typical happy hour at Bar Louie in Short Pump. The corporate overflow from nearby office parks is perched atop barstools; ID badges swinging from their chinos making them an easily identifiable species and a few mall folk spot the barscape as a two-bit breed of dude-rock blares in the background. It's a harmless, if not banal scene. But a forthcoming bar mistress tells a tale of when things are not all sugar-spiked martinis; when West End Wendy goes bad.

“She was sitting right there at the end of the bar. Dressed all up in white. Really put together, but she had already had a few,” the bartender says. “All of a sudden, the lady beside her spilled her drink and the next thing I know, the woman in white is on top of her and all I can see is blond hair flying.”

Similar scenes have played out at Babes in Carytown, whose clientele is predominantly female and who aren't strangers to seeing their exes in the same room with the next new thing. Longtime bartender Chris Goding chalks it up to two things:  “Alcohol and jealousy,” he says. “It's worth mentioning, though, that it rarely turns physically violent. Most of the time it's just bickering, insults and idle threats. A lot of times that's enough to get them barred for a few months so they have time to figure out how to act like an adult in public.” Just last month, the bar's front window was smashed with a mic stand when a woman was tossed for bad behavior. Management takes such offenses seriously. One wrong move and you'll end up on the notorious barred list, which sits just beside the cash register scrawled with about two dozen names.

From bar to bar, the tales are plentiful. Cous Cous had a pair of rivaling hairstylists duke it out because one walked in on the other in the restroom and allegedly said something about her naughty bits, ultimately kicking up a fuss between the girls' boyfriends. There was a recent prelude to a smack-down on Main Street when a pink-polo-wearing girl with pearls yelled obscenities up the sidewalk at another who had presumably “danced up on her man,” egged on by a handful of male onlookers.

Bar owner Mac McCormack says one of the worst fights he ever had to break up involved two ladies and Mace. “I was a bouncer one night at the old Ozone and a bunch of people told me there was a fight in the women's room,” he says. “So I go in to see two girls that have each other by the hair. There was blood everywhere. When I yanked the girl closest to me to break them up, the other one that she was actually fighting with sprayed me in the face with Mace.” He continues: “Girl fights are awesome. They're so violent.”

According to statistics provided by the Richmond police, ladies are no strangers to drunken rumbles and bad behavior. So far this year 142 women have been arrested citywide for disorderly conduct and public swearing or intoxication. In 2009, there were 327 of the same arrests.

As more and more YouTube clips capture girl-on-girl blood sports and DVDs such as “Cat Fights Unleashed” explore a new frontier of misogyny, some will argue that class is out the window and overall we're witnessing everyone become more violent.   Others will mourn the passing of sisterhood and damn the men who cheer on whiskey-tinged scrappin' with fervor. And then there are folks will simply say a girl's got just as much a right to clock another as a guy would do when threatened. Equality. One thing's for sure: Nothing has more influence over instinct than that the sweet taste of liquid courage. Reservations dissolve with every sip and ultimately mama's expectations give way to a visceral drive, regardless of upbringing and that crisp, Ann Taylor outfit the next brawler might be wearing.