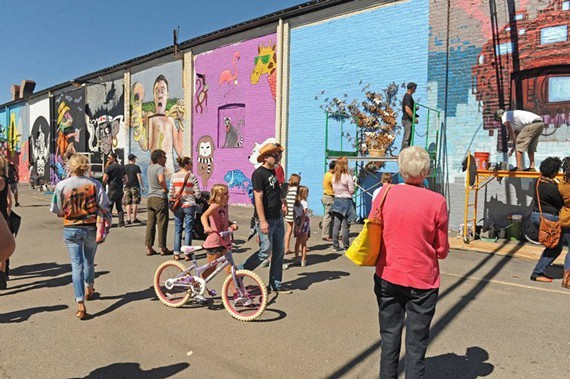 A security guard is hospitalized and the site of the RVA Street Art Festival is once again closed to the public following an after-hours assault Saturday.

The festival transformed the old GRTC bus depot on Cary Street into a mural-covered wonderland in September. When the three day event ended, the GRTC agreed to allow pedestrian access during daylight hours to the space, which had formerly been closed to the public.

On Saturday night, several suspects trespassed on the property and engaged in the destruction of GRTC property and criminally assaulted the security guard which has left him hospitalized. The case has been assigned to the Richmond Police Major Crimes Division.

We are outraged that such cowardly actions have led to the closing of the site and understand GRTC's decision. It was our goal to revitalize the area and GRTC property using creativity and art with the hope of changing the expectation of its use as a future neighborhood asset. We did not intend for the actions of a few criminals resorting to such horrible violent behavior to negate the hard work and many hours that GRTC, ourselves, the great artists, and countless others put in to rejuvenating this historically vital spot.

We do not believe that the nature of the art used for this revitalization is by any means indicative of violent criminal behavior. The subject of highest importance now is the well being of the gentleman assaulted and hopes for his speedy recovery; our thoughts and prayers are with his family. We will work with GRTC to reevaluate the use of the property in the future but for the time being the site will remain closed.

The Richmond Police Department was not immediately available for comment. Neither was GRTC. I’ll update this post when I learn more.

Update: RPD spokeswoman Dionne Waugh says that the department's major crimes division is investigating the incident as an aggravated assault. She says the guard's injuries are serious, but not life threatening.

No one has been arrested or charged in connection to the assault and it's still unclear what prompted the altercation. Here's the full statement:

At approximately 11 p.m. on Saturday, officers were called to the 2400 block of West Cary Street for a report of an assault. Officers found a male who reported he was assaulted by an unknown person(s). His injuries are not life threatening and the investigation is ongoing. We don’t have any information we can release at this time about what started the incident.