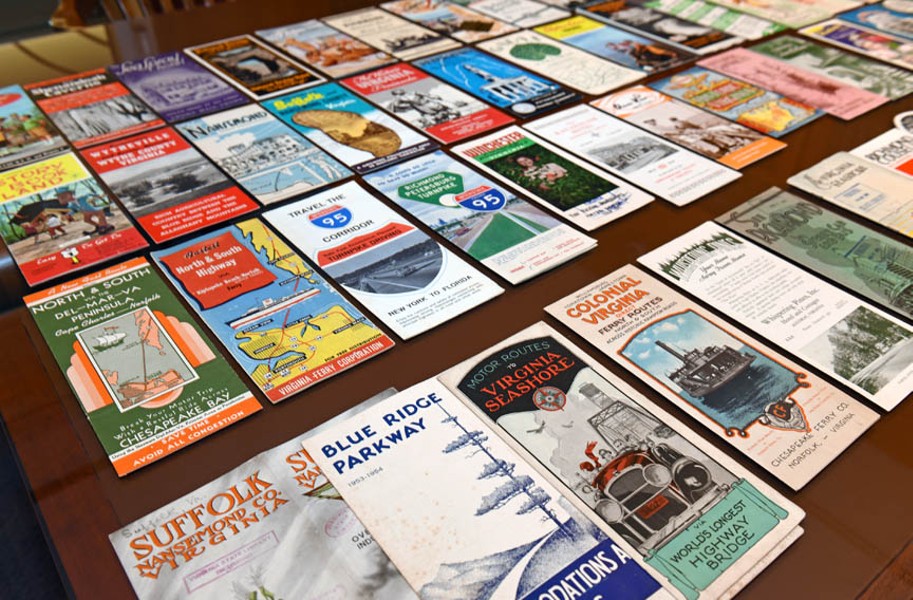 Long before Virginia was for lovers, the Commonwealth tried other ways to lure tourists.

“Enchanting Virginia,” one brochure beckons, showing 1940s bathing beauties. “It’s Virginia Beach for a Happy Time!” enthuses another. “Travel the Interstate 95 corridor,” one brochure suggests. “Safe, Fast, Economical, Pleasant Turnpike Driving.” (And we all know how that turned out.)

For the first time, about 100 Virginia travel brochures, most dating from the 1930s to the 1950s, can be seen online as part of the Library of Virginia’s digital collection.

For decades, the library has collected travel-related ephemera. But these pieces were spread throughout the library’s collections, and most of them were never catalogued. So Dale Neighbors, the visual studies collection coordinator, decided to round them up and make them available to the public.

One 1950s brochure makes a half-hearted appeal: “While in Virginia See Henrico County.” Another, for Hopewell, lists several factories among its local attractions, such as the Solvay Process Plant (“largest nitrate plant in the world”) and the Hummel-Ross Fibre Corp. (“where the first kraft board was made”).

Brochures for Richmond, unsurprisingly, tout its history. Neighbors particularly likes a 1930s piece showing a giant, bewigged man hovering over the city skyline like a colonial-era Godzilla. Another piece invites visitors to tour the city by streetcar — the fare is 7 cents. 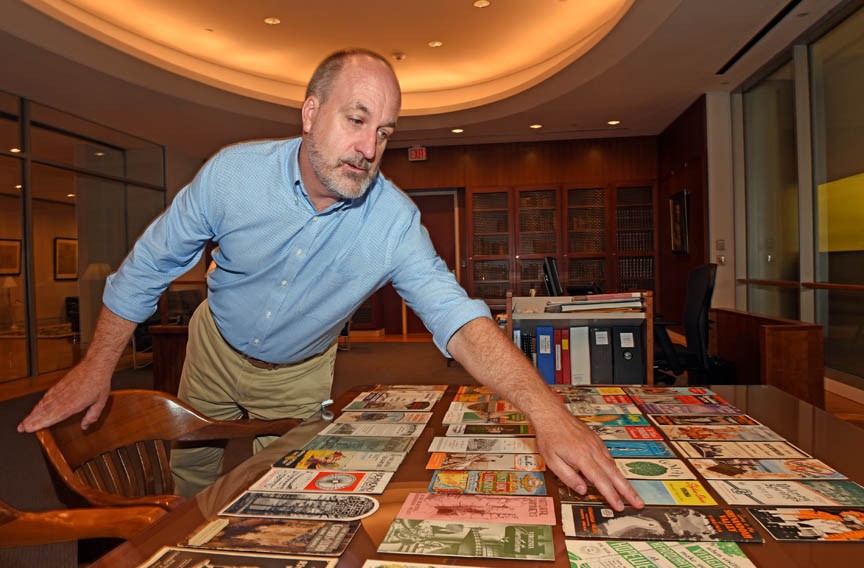 Neighbors always had a personal fascination with travel. As a kid, he scooped up handfuls of brochures while his family traveled from Maryland to Florida. A few years ago, he organized an exhibit about the old motels along Route 1.

Virginia tourism dates to the Revolutionary War period, Neighbors says, but sightseeing was a pleasure reserved for the wealthy. The most popular destinations were resorts at natural springs. By the 1870s and ’80s, well-to-do families began vacationing at the beach, although Southern vacationers preferred to go to Cape May, New Jersey, and other Northern destinations.

In the 1930s, the advent of automobile travel made Virginia’s sights accessible to a broad audience.

At the 1939 World’s Fair in New York, where exhibitors competed to out-dazzle each other, the Virginia tourism exhibit was famous for being … sedate. Virginia set up a room with 300 photo albums, comfy chairs and waiters serving ice water. “They got a lot of flak at the time for it,” Neighbors says.

But the approach worked. More than a million people came to the Virginia Room. “It was really, really popular,” Neighbors says. “They wore out the first two sets of albums.”

The third set, in nearly pristine condition, resides at the Library of Virginia and also can be perused online.

One album, simply titled “Motoring,” is filled with photos showing Virginia’s paved roads. “It’s an odd thing to see, these cars all by themselves on the highway,” Neighbors says, but it was an effective invitation to explore the state by car.

The library has a scrapbook created by three women who did just that in the 1930s. In a car named Lizzie, they drove from Long Island to Norfolk and back, assiduously collecting travel brochures, noting their mileage and taking photos of sights while visiting dozens of places in Virginia.

Neighbors thinks the library has copies of most brochures that were printed for well-known sights and cities, he says, but he continues to search for obscure ephemera.

“Some of them are crazy rare,” he says, such as the sepia-toned brochure from the 1940s for Moore’s Brick Cottages on Route 1 in Chester. A one-room cottage with bath rented for as little as $2.50 per night. “They give you a little more sense of what travel was like at the time, for the average person. And most of these are gone.” S