Village of the Sun

Doc “Some Kind of Heaven” is worth seeing if you plan on growing old. 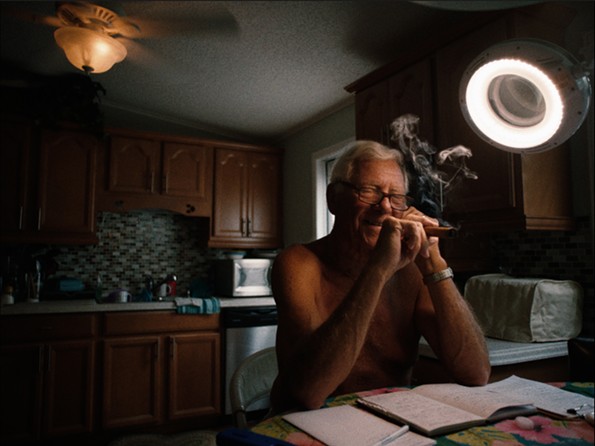 Some of my favorite documentaries share a common trait: They immerse you into a different culture than your own and you come out of it feeling a little wiser and more appreciative of life. Especially if the director has a good eye for detail and can get out of the way of his most interesting material.

This certainly can be said of “Some Kind of Heaven,” which opens at the Bow Tie on Friday, a gorgeously shot film that explores life at America’s largest retirement community, the massive, Disneyworld-like utopia known as the Villages in Central Florida. It's a manicured, gated community where 120,000-plus lucky senior citizens enjoy their final years by staying active, playing sports, partying, finding love, falling apart, dying, basically all the things people do at other stages of life.

This is director Lance Oppenheim’s debut feature film and it was produced by filmmaker Darren Aronofsky (“Black Swan”) and The New York Times, one of the paper’s first full-length productions. The Times was familiar with Oppenheim’s work since accepting his short films for its “Op-docs” section while he was studying at Harvard under legendary documentarian Ross McElwee (“Sherman’s March”).

At first, “Heaven” seems like a well-composed, somewhat surreal profile of a retirement community built as a kind of conservative, All-American, ‘50s suburban dreamscape. But Oppenheim is quickly drawn to struggling characters at the margins of this pre-packaged consumer fantasy. Or in the director’s own words:

“I rented an Airbnb from retired rodeo clowns. Over two months, while getting to know their friends, I began to understand the social fabric of the place. I began to observe this overwhelming sense of pressure that some felt in the community to have fun all of the time. There was almost an unspoken social contract that dictated life there, tied into the idea that as you grow older, time runs out, and as time runs out, every moment has to be great. It honestly stressed me out… So I became drawn to finding people who felt something similar, residents who didn’t find meaning in synchronized golf cart routines or guzzling margaritas at the Jimmy Buffett Parrothead Club.”

Cinematographer David Bolen does a wonderful job capturing the candy-colored, sun-drenched, almost Pop Art feel of the place, wide shots of sprinklers or the lazy glow of palm trees at sunset. But it’s the individual characters that make this film memorable, inspiring viewers to question their own stereotypes about aging and elderhood.

Characters like Dennis Dean, a former handyman to the stars from California who has been in and out of relationships his entire life. He moves to the Villages in hopes of meeting a retired woman with money, while living out of his van. When a girlfriend finally invites him in, he has the same issue of comfort vs. independence that has plagued his entire life: “Comfort or freedom, you can’t have it both ways,” he says.

Or there’s Ann and Reggie Kincer, who have been married for 47 years, but whose relationship takes a turn for the worse after Reggie starts to experiment with illegal drugs and yoga in search of a spiritual breakthrough (he even gets busted for cocaine).

Or the more reserved Barbara Lochiatto, who loses her husband and financial security and has to start working at the Villages, while trying to date a golf cart salesman named Lynn who is way into Jimmy Buffet and margaritas. Barbara delivers a heart-wrenching monologue in an acting class that mesmerizes the room.

Due in part to its own consumerist nature, America worships youth and often turns a blind eye to the elderly. So many American films feature young beautiful actors with vacuous gazes, but the faces at the Villages are all unique, all interesting and marked with life. In some cases, you get a sense they’ve grown the face they deserve.

Audience reactions to the film will likely run the gamut: Some could be envious or annoyed by these mostly white individuals who’ve been able to live out their days in such comfort and safety. Others may discover a certain wonder through the spirit of folks who even in their twilight years, refuse to give up on finding love or living an active life. There are universal takeaways: Everybody has problems, even in utopia. But it’s good to be reminded that senior citizens lead lives every bit as complicated, wondrous and strange as people half their age, probably more so, given what they’ve learned.