by Amy Biegelsen and Jason Roop 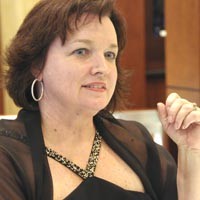 On Christmas morning June Tomes looked down at the small jewelry box in her hands. It held a tiny gramophone, a sweet if slightly baffling gift from her son, pop star and Mechanicsville native Jason Mraz.

The gift was meant as an invitation to join Mraz as his date Feb. 8 at the Grammy Awards in Los Angeles. The 31-year-old's hit single, “I'm Yours,” was up for song of the year and best male pop vocal performance. “We Steal Things” also was nominated for best engineered nonclassical album.

“I just burst into tears,” Tomes says of the surprise gift, and it's been Christmas morning ever since, right up to an after-work jewelry dress-up session at Schwarzschild's last week.

Armed with the good counsel of her daughter, Candace Mraz-Nelson, and Schwarzschild's president, Ed Croft, various scenarios and factors were calculated: the quality of the afternoon light in California when they'd be hitting the red carpet, the match to the dress and if it's appropriate to stack bracelets on the same arm as the ring. “The rule is,” Croft says, “when there's a question: more!”

After an insurance snafu, only the earrings made it on the plane, but on the live show Sunday, the hoops sparkled all the way to the TV screens at the Iron Horse restaurant in Ashland, where Mraz-Nelson and her husband threw a Grammy-watching party complete with red carpet, sushi and chicken croquettes.

Schwarzschild's Croft was there, along with Mraz's family members and friends, including Lawrence and Jennifer Brown, managing director and executive director, respectively, of the School of the Performing Arts in the Richmond Community, where Mraz honed his skills.

Mraz, who got to introduce Stevie Wonder at the awards show, came home empty-handed. But the Ashland crowd applauded his nominations nonetheless.

And a certain Twitter user named “JohnCMayer,” sent out a live message after winning for best male pop vocal: “I wanna share it with Mraz. His is a really special performance. Hands are shaking, about to play some R and B!!”