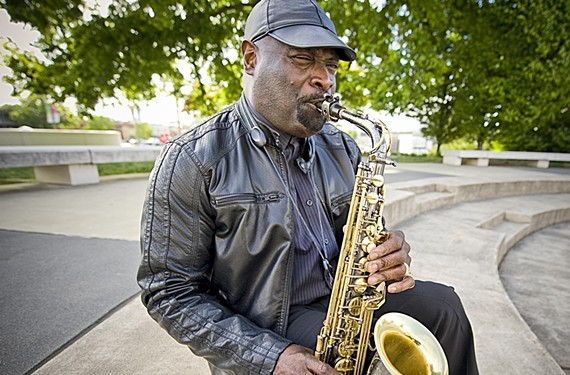 Can a bright, cheerful, funky instrumental change the world -- or at least win a Grammy? Longtime area jazzman James “Saxsmo” Gates is giving it a full-hearted try.

On the surface, the video to his new single, “We Can Make It Together,” is a love letter to Richmond, or more specifically to Jackson Ward. In its heyday, Second Street was the Southern Harlem with the Hippodrome Theater host to giants such as Ella Fitzgerald and Duke Ellington. Nattily dressed, improvising on the melody, Gates is its undaunted present.

Two young kids, drawn to the music, playing as Gates plays, represent the future. In the end, they push through the crowd to where the saxophonist is in full swing at the feet of the statue of Bill "Bojangles" Robinson. Together, in the context of the video, means harmony with people and with the past, at least with those parts of it that inspire forward movement.

“That is why I wrote this song,” Gates says. “Even if just some of us would come together, to work hard to help each other, all of us would make it. If we all just come together in politics, in the classroom, in our relationships, we could make a big improvement. It all depends on passion, love and dignity.”

The single and the forthcoming album of the same name are Gates' big push for wider success. He’s enlisted prominent friends from his long career. Monster Virginia Commonwealth University alumni drummer Nate Smith is on the record. So is guitarist Freddie Fox, husband of Evelyn "Champagne" King and Gates' Berklee School of Music Classmate.

Gates has put together a local team to promote the song as widely as possible. “We are hitting this hard,” he says. “Our expectations are high. It’s a challenge. Like riding a bull, if you aren’t ready, you might get hurt.”

After all, it’s only changing the world. As in baseball, if you want to score, you need to get on base. The easiest way to start is with a single.