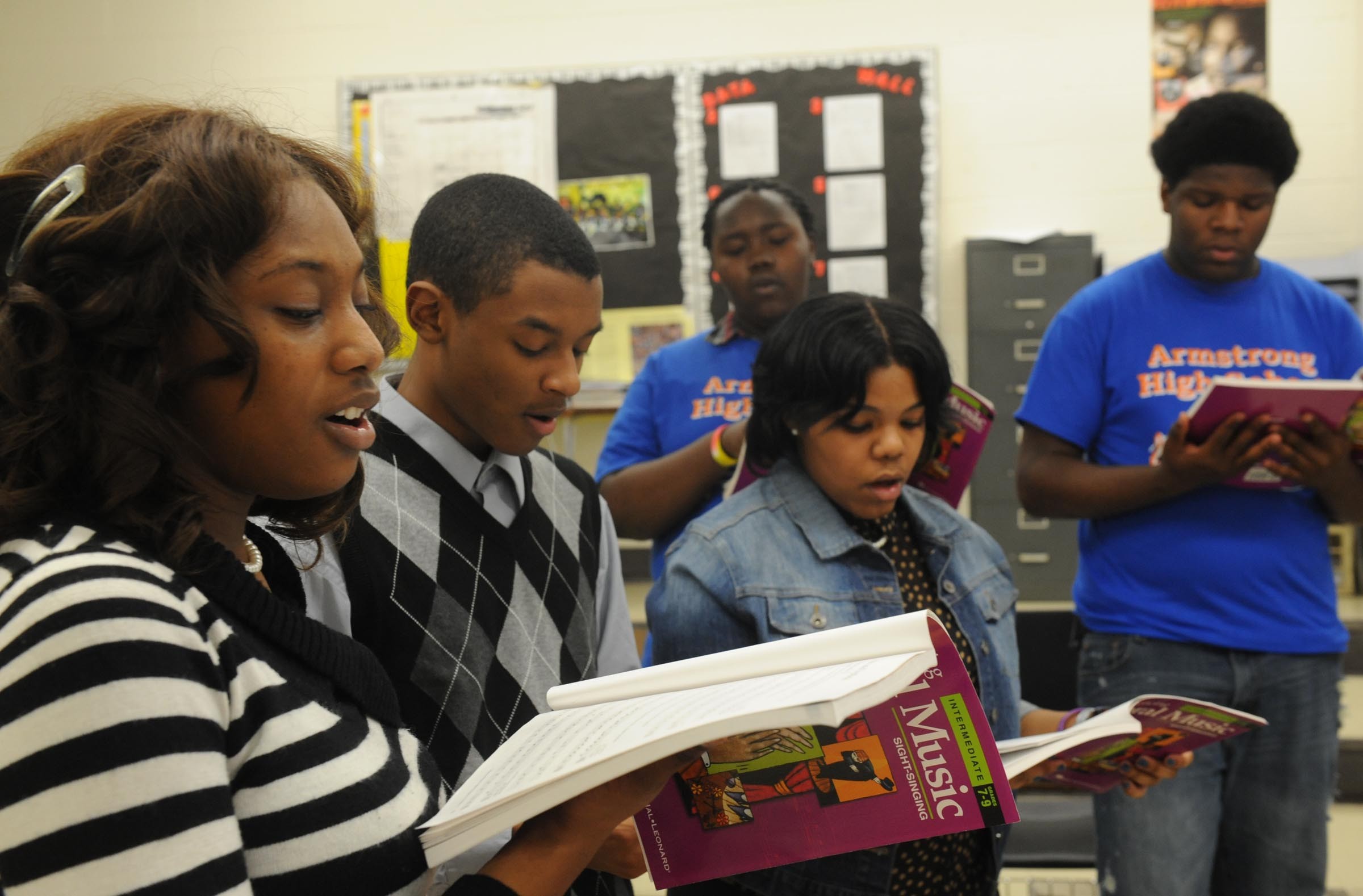 Bianca Waddy, a 17-year-old senior at Armstrong High School, is used to people not expecting much out of her and her classmates. "When people say Armstrong," she says, "they all, 'Oh, that ghetto … school.'"

Going by test scores and graduation rates alone, Armstrong is one of the worst high schools in the state.

So it was a big deal last year when Waddy and her fellow school choir members scraped together enough money to compete in a major choral competition in New York. It was an even bigger deal when they walked away with two gold and two silver medals.

Their success earned them an invitation to return this year to sing alone on stage as a featured choir at Carnegie Hall. A huge honor for any school, the students at Armstrong were buoyant.

"Just the fact that we had an invitation to Carnegie Hall — Armstrong choir singing at Carnegie Hall," says Teshawn Satterfield, 18, a senior in his fourth year with the choir.

But the Armstrong choir won't be singing at Carnegie Hall. The school was forced to turn down its invitation because the school and the students don't have the money to finance the trip.

Armstrong Principal April Hawkins-Jones says the reality of the situation is simple: With the school's limited budget, core subjects such as math, English, social studies and science must be the priority because "those are the major requirements for a diploma — not singing at Carnegie Hall."

"Of course with the budget there's not a line item to give a group that amount of money … that's an expensive trip," Hawkins-Jones says.

While the students have missed the opportunity to be a featured choir, they're still trying to raise the $20,000 necessary to send a group to participate in the larger festival.

The choir members have been doing everything they can to raise funds. They play host to spirit nights, sell concessions during school basketball games and perform at local churches. They also accept donations online through the Richmond Public Schools Foundation.

Fundraising is tough in a community where 75 percent of the students come from families poor enough to qualify for free or reduced lunches.

Last year Armstrong was able to raise enough money for their trip only after the Richmond Times-Dispatch featured a column on their effort — publicity that's difficult for the same group to get year after year.

Making things more difficult, Hawkins-Jones says the school district has reservations about reaching out and giving the impression that it's begging for money.

The choir's director, Will Griffin, is undeterred. He says the exposure of participating in major competitions is important for his students, even if they missed out on an opportunity to take the stage at one of the country's premier concert venues.

Likewise, members of the choir say they're just looking forward to the opportunity to perform. "At the end of the day," Waddy says, "as long as we're a part of it, we're just happy to still be able to go and sing." S