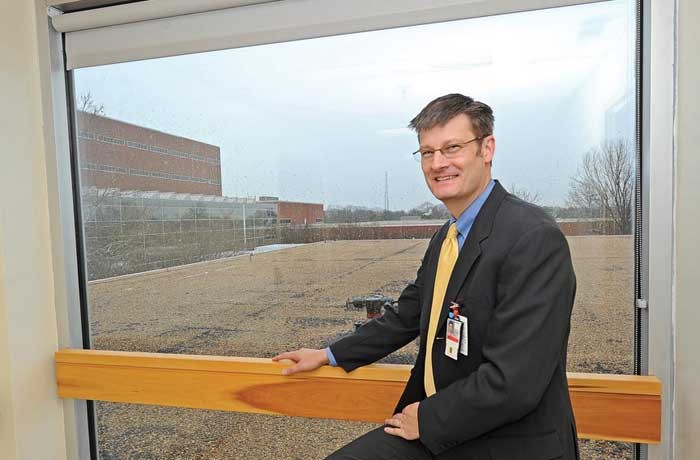 McGuire Veterans Medical Center is sick of being your grandfather's hospital.

With glass-block walls, cracked-tile floors and violet, vinyl chairs, parts of the South Side hospital resemble a Greyhound bus station circa 1984. Although McGuire is nationally known for the care it provides to veterans with spinal cord and brain injuries, locally it's perceived as outdated.

Not for long, hospital officials hope. Flush with an influx of federal funds, McGuire is embarking on $30 million worth of construction projects. The result will be a complete makeover of the aging, 2-million-square-foot building — "because it's not the VA of 20 years ago," says Jim Dudley, the hospital's chief engineer.

The Veterans Affairs hospital serves only veterans, but it's also the official backup facility for the local health care system should a catastrophe strike. The goal of the renovations is twofold, Dudley says: to expand and improve operations, and to give the hospital a more modern, homelike feel.
Workers have begun to streamline the central registration area, which patients have described as a baffling maze. They're adding wheelchair-height counters and self-check-in screens, similar to airport ticketing kiosks. The pharmacy, a single window with a bleak waiting room, will get a similar treatment.

In late February construction begins on a 20,000-square-foot addition that will serve veterans with traumatic brain injuries. And in late summer the hospital's large physical therapy unit will be turned into a single large gym.

Later this year, the nine operating rooms — which are about half the size of modern ones — will be expanded, and one or two more added. The cramped emergency room will be redone. Next year, another addition will double the size of the dialysis unit.

Those are just the projects officially on the books. If the hospital receives more funding, Dudley plans to add two 40,000-square-foot additions to the long-term care and spinal-cord injury sections, the latter already one of the largest for veterans in the nation. He also wants to add a 600-space garage near the emergency room entrance. With 5,000 patients, visitors, employees and volunteers passing through the doors daily, parking has become notoriously difficult.

The hospital has updated some sections of the building. Last year, a room downstairs was converted into a '50s-style diner, complete with vinyl booths and a jukebox, to make the hospital's resident World War II vets feel at home. "The patients really got a kick out of it," Dudley says.