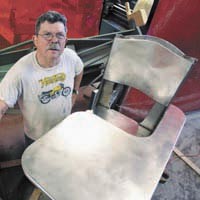 Come exam time, students at Virginia Commonwealth University will have a new place to cram should the libraries fill to capacity: Lester Van Winkle's sculpture of a pair of desks, each weighing nearly a ton.

The creation is in honor of the 40th anniversary of the merger of Richmond Professional Institute and the Medical College of Virginia to make VCU. The large-scale installation will be unveiled in October.

Professor emeritus Van Winkle, who started his career as a sculpture professor in 1969, began to conceptualize his piece more than a year ago. He began soldering it at the university's metal shop in May. The desks, which he's creating with the help of Richmond sculptor Ross Caudill, are intended for students to sit in, mark with graffiti and essentially adopt as their own.

"I hope people's butts will polish the seats," says Van Winkle, who taught the other artists commissioned for the project, Charles Ponticello and Tim Blum.

The desks will accompany an enormous easel propping up a depiction of Henry Hibbs, founder of the professional institute's predecessor, the Richmond School of Social Economy.

Joseph Seipel, senior associate dean for academic affairs and director of graduate studies in the School of the Arts, describes the bronze and stainless steel sculpture as "a classroom setting to suggest a time gone by."

Ponticello, who received his MFA from VCU in 1994, designed a spiraling stack of discs, etched with important phrases and facts from the school's history. His sculpture is going up Aug. 5-10 -- it'll be pieced together on-site.

Blum, who most recently lived and sculpted in Korea, is working on his modern interpretation of large-scale ram horns to honor the university's mascot.

Sculptures are a fitting way to celebrate the VCU merger, considering the university has the No. 1 sculpture school in the country, according to U.S. News & World Report. Come October, it can be credited for giving Richmond several more monuments to add to its ever-growing collection. Go to www.styleweekly.com for an interview with Charles Ponticello on the process of creating a public sculpture for VCU.