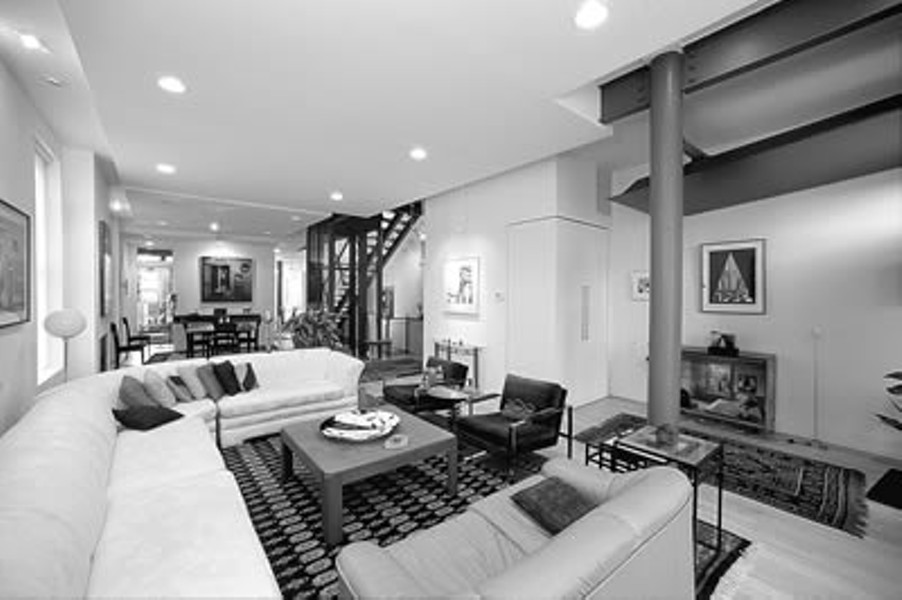 Actually, it's all of the above — multiple factors establishing an exhilarating, three-dimensional space in a house that flows seamlessly and luxuriantly from one area to another, from floor-to-floor.

"Your house is going to be a work of art." That's the promise Jay Hugo, a partner in Richmond architecture firm Bond Hugo Farley, made to clients Sandy and Heyn Kjerulf during the design phase for the house the couple sought to transform.

"I thought that was awfully cocky," Heyn thought to himself at the time.

Rather than a work of art, what the Kjerulfs had in mind was a place for art. "We wanted lots of natural light to show off the stuff we had collected over the years," Heyn says offhandedly.

After many years of living in suburbia, the Kjerulfs craved city living where they might enjoy strolling to restaurants and an occasional class at Virginia Commonwealth University — and become far less dependent on the automobile.

They also wanted Sanford Bond for the job, an architect who maintains an international project list of houses. "We knew his work and knew that his own Fan house was the only home we would have moved into just as it was," Heyn says. At Bond's lower Fan townhouse he had removed many walls and reconfigured the interior, an approach he would take for the Kjerulfs.

The opportunity for the collaboration arose in the form of a 22-foot wide, four-story, corner house that hadn't been lived in for 30 years.

"It had been trashed, it was a wreck," says Heyn, "but that actually turned into a plus." Architect and client didn't have to be shy or guilty about ripping out woodwork, moldings and other historic architectural features that had already deteriorated beyond hope.

The challenge for Bond and company was transforming the typically longish, narrow and constrictively boxy interior into an open and flowing space.

Standing in the main floor's front living and dining area, one's eye is now drawn all the way through the house to large windows that overlook a hothouse and a tiny, outdoor walled garden that is paved in rectangular chunks of bluestone.

The long and narrow interior horizontal floor planes (1,500-square-feet on three lower floors and 600-square-feet on the top floor) are broken up visually by a glass and metal elevator shaft that cuts a powerful, vertical and sculptural line up the center of the house.

If the overall effect is like a landscape, Bond says it was intentional. He wanted the interior to be akin to looking out onto a rural or mountainous view where one's gaze doesn't land on just one thing. Rather, one's eye bounces from plane to plane. The Catch-22 was that although client and architect desired open spaces, The Kjerulfs' numerous works of art required extensive wall space.

This led to Bond's "art wall." The inner wall of the corner house was freed up and made a continuous plane, from the newly excavated English basement shooting up to the fourth floor. Set along the wall, but not touching it, Bond placed a continuous rise of stairs starting at the lower level and rising straight up with only slight and subtle gyrations. The treads, like flooring throughout the house, are made of a warm, almost luminous maple. What has been created, where constricted hallways might have been, is a unique, vertical room. Brilliant.

Heyn was delighted with both the architect and contractor, Chip Spitzer, each of whom he says both brought strong points-of-view to the project. "The stronger they are, the better the resistance," he says, "Don't look for a balance between architect and builder, or you won't get that tension."

And what pleases the architect? "You never know what the light is going to be like, it changes at different times of the day," says Bond, "but it's terrific.

And does the house live up to architect Hugo's promise of being a work of art?

"It's like living in a Mark Severo sculpture," says Heyn, beaming. "It's very three-dimensional." HS

Visiting Heyn and Sandy Kjerulf's house isn't just a drinks and canapé occasion: The house provides the entertainment. The simple, front fa‡ade of the townhouse has a modest front stoop. But above this sweeps an extended metal canopy that provides protection from the elements and a transition from the street. It is a major structural and design element as it cuts through the brick wall to create another, welcoming canopy in the foyer area.

The Kjerulfs installed a computerized lighting system so they can regulate light levels throughout the day. Wattage can be quite low if they are entertaining a small gathering. But for bigger parties they prefer things all lit up so that the artworks pop. There are paintings and prints by such renowned artists as Jim Dine, Roy Lichtenstein, Larry Rivers, James Rosenquist, and Virginians Theresa Pollak, Ann Lyne and Gerald Donato.

For big parties the bar isn't set up in the central kitchen on the main floor or in the dining area. Instead, bars are placed on the basement level and on the second floor in the Kjerulfs' home offices. This arrangement forces guests to move up and down the grand staircase, from level to level, rather than having them clump up.

"It pulls people, it's always pulling people," says Heyn. "That's the way to use this third dimension. The stairway becomes a vertical room."

Although the new house could be considered an open plan, such old-fashioned amenities as a coat closet have not been forgotten. This is in a space near the front door and backs up to a powder room to create what the modernists would have termed an expressed service area.

On the basement level, an elongated, windowless room has a screen that can be lowered electronically to create a home theater.

On a recent afternoon, the Kjerulfs had just returned from a trip abroad and were fretting that their baggage hadn't arrived with them. Clothes they had, but they were anxious about the whereabouts of wine they had purchased for the temperature-controlled walk-in wine cellar.

Overnight guests stay on the fourth level in one of two guest suites. One of the rooms is festively decorated with na‹ve Brazilian art, acquired during the two years the Kjerulfs lived in South America. —ES