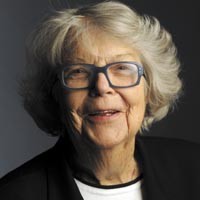 This year, the horticultural award for Perennial of the Year was bestowed upon a hardy geranium named “Rozanne.” Its flowers, unassuming and abundant, shine a brilliant violet blue. “Rozanne” never tires; it keeps blooming and blooming, from spring even to winter.

So was Rosalie Suzanne (Rozanne) Garrett Epps, who died Sunday evening after a brief illness. We at Style Weekly knew her as our senior contributing editor. For years she was an eagle-eyed copy editor and Back Page moderator, our longest-serving colleague with whom the magazine had a 21-year association. Readers recognized her as language columnist “Rosie Right.” But her work at Style was only the latest endeavor in a remarkable life.

Rozanne was born Oct. 29, 1922, in Jacksonville, Fla. After graduating from Vassar College in 1943, she worked for Naval Intelligence in the Pentagon until the end of World War II, when she became a columnist for the Washington, D.C.-based Pathfinder news magazine.

In 1965, Rozanne began a long career with Richmond Professional Institute, now Virginia Commonwealth University. She worked as assistant director of the Evening College and Summer School, becoming director of Evening, Summer and Off-Campus Studies. She retired in 1986 when then-Gov. Gerald Baliles appointed her to VCU's Board of Visitors.

Rozanne started working at Style Weekly as a freelance copy editor in 1987, joining the staff full-time two years later. In 1991 she began writing a column called “Getting It Right” (soon changed to “Rosie Right”), in which she addressed the foibles and quirks of the English language.
“Eternal vigilance is the price of clarity,” she once wrote -- yet she forgave Style writers for their errors and corrected them with gentle good humor.

Rozanne made us laugh. She bemoaned the state of the world but never lost hope that things would get better. She loved the Oxford English Dictionary. She considered commas an inscrutable art form. We miss her.

A memorial service for Rozanne Epps will be held 11 a.m. this Wednesday, Nov. 19, at St. Paul's Episcopal Church, 815 E. Grace St. Memorial contributions may be made to the Rozanne Epps Scholarship Fund at Virginia Commonwealth University or the Central Virginia Legal Aid Society.