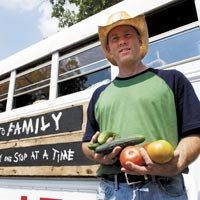 Lottery tickets, cigarettes and beer are three things any shopper can find on Jeff Davis Highway. But if Mark Lilly has his way, locally grown okra, beets, fresh maple syrup and locally canned apple butter soon will be easily available to the many low-income families that live along this disadvantaged city corridor.

For about three hours last Thursday night, Lilly brought his idea — and his converted school bus full of vegetables and other farm products — to the parking lot of the Satellite Restaurant for City Councilwoman Reva Trammell's monthly constituent meeting.

“It was very emotional,” says Lilly, a Varina native who lives in Henrico's suburban North Side. He got the idea for his magic vegetable bus about two years ago as a way to bring the resurgent farmers' market scene to the communities that are most in need of nutritious food alternatives. His business, Farm to Family (Farmtofamilyonline.com), aims to become a mobile distributor for local farmers.

Invited to speak to Trammell's constituency, Lilly says he spent much of the three hours in his bus selling produce and answering questions.

“There was a trailer park close by and some families came by — they were really grateful, asking when I was coming back,” he says. “A lot of them don't have cars and there are no local fresh markets where they can get this kind of stuff.”

Lilly began taking his bus full of produce to local farmers' markets only about two weeks ago after outfitting it as a barn-themed mobile market, and it's not just people along Jefferson Davis that have responded positively.

Karen Atkinson operates the Market Umbrella, a cooperative marketing effort to boost Richmond's buy-local scene. She calls Lilly's idea a dream come true that has the potential to literally drive across the divide long preventing markets from reaching low-income consumers.

“It's bringing it to the people instead of the people coming to the market,” says Atkinson, who shares Lilly's vision of establishing a bus route throughout the city upon which he would sell produce grown by local farmers and provide how-to programs on urban gardening in low-income city neighborhoods.

Where markets have had little trouble taking off in the city's more affluent neighborhoods — the South of the James Market in Forest Hill Park has been the most popular of a handful of recent new city markets — Atkinson and Lilly both see the less-affluent areas as those most in need of locally grown, healthy food alternatives.

“This is something that's really been needed,” she says. “So many people on the Jefferson Davis corridor don't have cars. … now the [Farm to Family] bus will come to them.”