In the wake of the Lumpkin's Jail dig, attention turns to the university-owned slave burial ground next door. 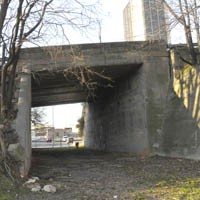 Much fanfare attended the Dec. 17 unveiling of the ongoing archeological excavation of Lumpkin's Jail, a notorious antebellum slave jail buried for 100 years, 10 feet beneath a parking lot behind Main Street Station.

Dignitaries from the state, city and the private archeologists who conducted the work all took turns at a podium to tout the find before a crowd that included newspaper reporters from as far away as California.

Across Broad Street, it was business as usual at a mostly vacant Virginia Commonwealth University satellite parking lot.

All the attention at Lumpkin's is for good reason. The jail, called by one long-ago Richmond visitor “one of the prominent and characteristic features of the capital of Virginia,” largely has been lost to history. Along with it, history also lost track of what may be one of the defining tragedies of a country that went to war with itself over the institution that Lumpkin's represented.

But the lack of attention at the adjacent parking lot makes no sense at all, Yvonne Walker says.

A resident of Ashland, Walker is a direct descendant of Gabriel Prosser, the 18th-century slave-conspiracy leader who was executed and maybe buried under the VCU parking lot. Prosser was one of perhaps hundreds of slaves whose final remains likely were interred in a disputed acre or so of land the university intends to repave with lighting improvements for doctors and students at the nearby medical college campus.

“That should be a monument,” Walker says, “just like they have those monuments of [Confederate President] Jefferson Davis and all of them on Monument Avenue. They should definitely have him there.”

Prosser, whose real last name, according to his descendants, is Bingham, organized and led a failed slave rebellion in September 1800 that aimed to capture the city, as well as then-Gov. James Monroe. His thwarted efforts sought to bring an end to slavery in Virginia. Captured a month later, Prosser was hanged at the city gallows that stood at the southwest corner of a site marked on 1810 maps as the Burial Ground for Negroes. Also on the site was the city's powder magazine, central to Prosser's planned rebellion as a means of arming his followers.

It's the recent findings at Lumpkin's — including an incredibly well-preserved cobblestone courtyard with a central brick drain and various building foundations — that have advocates for the burial ground site adjacent to Lumpkin's hopeful that the city and VCU might come together to preserve the property.

The university previously offered a 50-foot-wide area west of the property where it borders Interstate 95 as a place for construction of a monument. But Walker and others say that continuing to use any portion of the former burial ground as a parking lot amounts to a continued desecration of hallowed ground.

“When I pass by there, I think ‘Wow, this is me,’” Walker says. “It actually gives you a sense of history.”

The preservation talk has taken a conservative approach to the politics surrounding VCU's ownership of what was, according to an 1810 city map, a cemetery.

“It would require some further testing to ensure a site that has some [historical] integrity,” says Kathleen S. Kilpatrick, director of the Virginia Department of Historic Resources, who's worked with the city and Slave Trail Commission to preserve Lumpkin's. Her agency determined during the summer that the burial ground was likely directly under I-95.

In an interview with Style Weekly weeks before the city asked for the state's determination on the burial ground location, Kilpatrick voiced the opinion that “most good research indicates that burial ground is under the interstate.”

That research conflicts with the work of Michael L. Blakey, a College of William and Mary professor and director of the college's Institute for Historical Biology, who released his own detailed report on the burial ground shortly after the state's report. Blakey concludes that the burial area likely stretched from a location currently under I-95 to the east as far as the old boundary of now-buried Shockoe Creek, in Shockoe Bottom. Blakey says the burial ground's size is probably three to five times larger than the state's estimates.

Haskell S. Bingham, a retired vice president of academic affairs at Virginia State University and great-great-grandson of Gabriel Prosser, questions whether the state report is even relevant to the urgent need to preserve something that's both a cemetery and a site of significant historical importance. His efforts were crucial to the state's eventual decision to place a marker on Broad Street near the gallows, and to the state's decision last year to issue a pardon to Gabriel.

“The old site where the execution or gallows was, that whole area that was thought to be the burial ground — it's covered over as a parking lot,” Bingham says. “If they're going to re-cover it over, that's adding insult to injury.”

But determining what to preserve remains difficult, Kilpatrick says. She maintains that “one of the questions that's still up in the air is what [are] the actual dimensions of the burial ground” — acknowledging more recently that “definitively, yes, the [burial ground] was in that general area.”

“I think there are a lot of things that need to be considered,” McQuinn says. “I'm grateful to VCU for their considerations in sitting around the table on how can we use a part of it. … to memorialize the people who are buried there.”

The university also has put on the table the possibility of allowing the city or Slave Trail Commission to buy the land, with a proposed price tag of $3 million. McQuinn says there's no money to take advantage of the offer.

Those negotiations occurred before the Lumpkin's site — located just a few hundred yards away — began yielding such a rich trove of history.

“The expectation was not that high in terms of what would be found” at Lumpkin's, McQuinn says. Pointing to the 10 feet of fill dirt over the site that largely insulated Lumpkin's from later development, she says there's no reason to believe from the existing topography that the burial ground wasn't similarly preserved.

As it stands, the world may never know what lies below the broken pavement and gravel that serves as the only grave marker for what may be the final resting place of hundreds of souls lost to Richmond's past.

“I would love for us to be able to purchase it and make it a park,” McQuinn says. “It's more of a challenge now — if you can get past the economic crisis that we're in there may be people willing to donate more to help us push it forward.” S