His contract dispute, his 18 years of memories and what it will take for him to return to the Peppas. 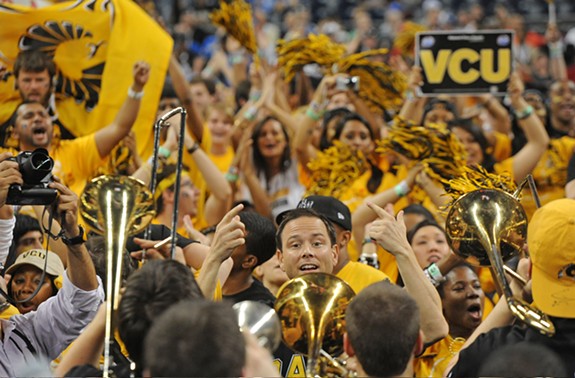 Ryan Kopacsi has enthusiastically directed Virginia Commonwealth University’s pep band, the Peppas, for 18 years. But yesterday, he and the university announced that they were unable to agree on a new contract -- and his return no longer is part of the plan.

“We did everything that we could to keep Ryan,” VCU Director of Athletics Ed McLaughlin said in a statement. “He decided to leave on his own, but we appreciate his long service to VCU as he goes in a different direction with his life.”

Kopacsi also is a Richmond firefighter, which is why he lets me know he’ll be a bit late to our afternoon meeting -- because of a call his station received earlier. Our interview begins within minutes of his return to Station No. 6 and ends 33 minutes later when an alarm sounds, sending him and his fellow firefighters out on another call. We meet as he’s jumping out of a fire truck, and say goodbye when an alarm sounds, an intercom voice says, “Engine 6, person down,” and he jumps back in the truck.

Style: You’ve worked as the band director for 18 years. There likely aren’t too many people within the athletic department who have been at VCU longer than you have. After all this time, what’s the main factor leading to your departure?

Kopacsi: Well, I don’t want to leave. I don’t want to leave. The main factor is, there comes a time when rubber’s got to meet the road. There is stuff that I want to do with this band that unless action is taken -- and I guess pretty drastic actions, then none of that will ever start to take place. So unless I start moving the needle a little bit in this direction, then I won’t get any of the vision that I want to start taking place.

I don’t want to look a gift horse in the mouth, and I’m very appreciative of even what they offered me. It’s just not in the same ballpark of what I’m asking for. But even that is progress, because it wasn’t talked about [before]. We [the Peppas] are an afterthought. As long as we show up and do what we’ve been doing, being a national headline, then “Oh well, they’re just doing what they do.”

And it’s just not about me. The kids, man. These kids played over 100 gigs last year. U.Va.? They don’t play that many gigs. I don’t know for a fact, but I dare say there aren’t any bands in the country playing that many gigs. We’re at everything. And we love it. We have grown to be part of the community, not just VCU. Which is nice, man.

The Peppas’ influence has grown to expand beyond the Siegel Center. What do you see as the band’s value to the community?

When it started, there was no real vision for this to even happen. For me, the investment in the community is when the kids move on. For example, I had a kid text me. He said: “Hey man, I don’t know what’s happening with you, but I want you to know you gave me the courage to go after a grad assistantship even though I’m 10 years younger than everyone else. I’ve had all these professors tell me not to go for it, but you gave me the confidence to go for it and I’m having the time of my life.” For me, if this stops today, that is what makes it worth it.

You don’t seem to be following any sort of template as a band director. Who influenced your style early on?

Well, the HBCU bands -- the historically black colleges. I knew I just wanted to jam like them, but I wanted to put my own flavor on it. And I love sports. So my thing was, I wanted to make sure that my band made it very tough for the other team to win. That was our niche. And then people started liking that. And then everything else fell into place. But we wanted to be passionate about our team. We wanted to be rabid fans, and that is where we really fell into place.

What is the main difference between your first year and your last year with the Peppas?

Biggest difference: We had 10 to 12 people in the band. Everything was about me. How crazy could I be? What was I wearing? Or more importantly, what was I not wearing? Now it’s more about how good the band is. What is the band playing? And the band is good. We weren’t always very good. Now we are entertaining and good. The maturation of the band has been the biggest difference. And the growing [of the fanbase]. It gets dismissed, but the whole package -- of course winning lubricates everything -- but the whole package has helped move everything along.

What are a few of your favorite moments during your 18 years as band director?

There are a lot of them. Eric Maynor hitting the shot to beat Duke. Being right there to watch [Duke University Mike Krzyzewski] drop his head. Even earlier in that game, during half-time, we performed and 18,000 people gave us a standing ovation. The game that we beat Louisville in the Siegel Center. The game I did a backflip off the podium and busted my head open. The Final Four.

This job has afforded me a lot of luxury. … It’s not about me any more. The program has to move forward. If [Director of Athletics Ed McLaughlin] is willing to sacrifice everything we’ve become because he doesn’t want to make the investment, then he has to sleep with that. But it’s got to move forward. And if it doesn’t move forward then it will fall way behind. And that is on him.

You said that your vision for the band isn’t being fully supported by the athletic department. What is your vision?

So, if I won the lottery, this is the ultimate vision. I would create an endowment fund, where I would have 30 to 45 full-time scholarships that would be renewed, and my salary and my assistant’s salary would be endowed. With those scholarships, because we are not tied to the music department at all ... we could take those scholarships to the director of the band and say, “Go recruit the best, wherever you need to.” They’re music students and in the pep band. You get the best of the best, I get the best of the best -- and we can share. There aren’t very many schools in the country offering full rides. We could work together, and make VCU one of the best music schools on the East Coast. We could crush it.

That’s the ultimate goal. Get it all endowed so that I don’t have to worry about this stuff. Who likes to ask for money? I guess there are some people that like to ask for money. I don’t. I asked for a multiyear contract so I don’t have to do this every year. I asked for the same amount three years ago that I’m asking for now. It didn’t go up, that’s a misconception. Everyone thinks I am asking for more. I’m asking for the same. But that was a mistake. I sold myself short, and sold the band short. Because I was emotional. But you live and you learn.

Is there anything that could be done or offered to keep you on for next year?

I sent an email yesterday. I told them I wasn’t accepting terms of contract that they put out. But if they have a change of heart into the two-year plan that I offered them, to please contact me and Duane [Coston], my assistant. We are chomping at the bit to make next year happen. Even now, Duane and I are still preparing to make next year happen ... until we’re not.

So there is always hope. I did get several phone calls late last night. I’m not going to say from athletic directors, but from people that are attached to athletic directors at three different universities. But I want to see how this thing plays out with VCU before I look to move on. My heart is here. I’m a Richmond native.

But I love music, and there is an intriguing part to see if I can duplicate this somewhere else. You know, I’ve heard along the way, “You can only do what you do at VCU.” I don’t know if that’s true or not. It sounds like a wonderful challenge. Because obviously, I couldn’t go to [the University of Richmond] and take my shirt off.

It seems like a lot of people, including you, are hoping that this can be resolved in a way that keeps you at VCU.

At this point, I feel like the AD is a strong figure. … Well, I feel like someone is going to have to persuade him to have a change of heart. Maybe I do hit the lottery. I just bought some Mega Millions tickets. I’ll call you tomorrow: “I’m the new Athletic Director.” You think I could buy my way into that position if I won $330 million? That would be fun right?

I’m getting crushed a little bit on social media. People see me as whining. But, when you’re a big company -- VCU is big business -- they have all the leverage. They have the ability to put out a press release. They have the ability to say what they want. But if I say something on social media, which is my only means of communication with a mass amount of people, I’m the bad guy. Granted, this wasn’t my plan. When [Ed McGlaughlin] sent out this email, my phone started to explode. So, I’m trying to ward off a bajillion phone calls. I had a guy from ESPN call me last night. It’s a bit surreal.

I think for the amount of [energy] that the band pours into the community, into the atmosphere, into the athletes, into the university, into the city, into the students, into each other, into becoming good adults, becoming good students -- I think the abundance that we give back is a drop in the bucket for what we are asking for. I think it’s irresponsible, quite frankly, for [McLaughlin] not to want to come to the table with it. But, we have a difference in opinion. He thinks it’s irresponsible for me not to agree with his terms for a contract. But I’ll put it this way: If I followed his plan, I wouldn’t get to where I want to be until 2040. That’s a long time a way. That is a long time.