After winning the CAA championship, Richmond awaits the encore. 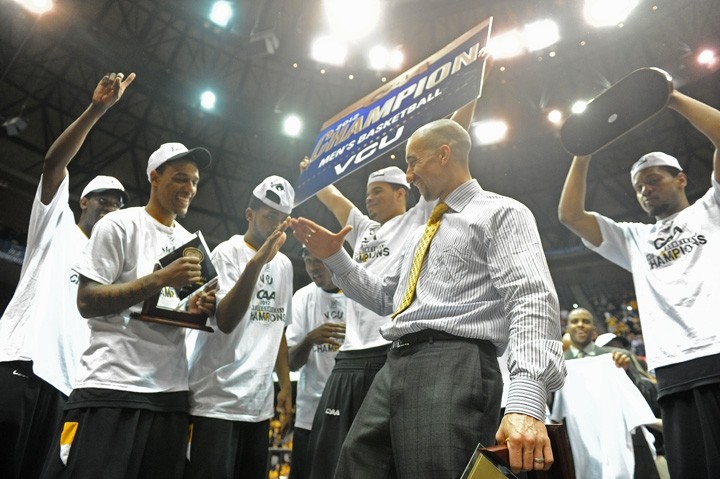 There were brief moments of trepidation -- once again, the Virginia Commonwealth University Rams were letting a big lead slip late in the second half -- but it ended with junior guard Troy Daniels hitting four clutch free throws. Up by 3 points with 11.9 seconds to play, the Rams’ vaunted defense did the rest: VCU 59, Drexel 56.

Still, the win felt like something more important than the Colonial Athletic Association championship.

Yes, winning the CAA means something, but the sea of black and gold that sold out the Richmond Coliseum on Monday night, and made this cavernous facility feel as rambunctious as the Siegel Center, was shoring up the Rams for the sequel. Richmond wants so desperately to relive the Final Four run of 2011. The Rams may not make it again. They probably won’t make it again. But for the next week and a half, VCU won’t be denied the storyline. They’re in the NCAA tournament for a second straight year. Now it’s just a matter of where, and who they’ll play.

“Now, over the next six days, everyone can relax,” Coach Shaka Smart told the crowd after the game, standing on an elevated stage at center court. “We’re in the tournament.”

Few will remember that the Rams nearly coughed up the game at the end. If it weren't for a bail-out foul call against Daniels, who was trapped in a double team with 19 seconds left on the wrong end of the court, Drexel trailing by only 2, VCU might be suffering through the next week wondering if the NCAA Selection committee would dare snub them. The Rams finished the season stronger than last year, and with more wins -- still, many of the so-called experts had the VCU on the bubble, unlikely to get an at-large bid if they came up short of the tournament title.

Unlike the previous night’s game against George Mason, wherein the Rams put on one of the most spectacular first-half shows in school history -- up 32-4 midway through the first half -- this one was a bit more even-keeled. Their sublime full-court press complemented offensive spurts that were a bit more measured. Drexel is wider and physically more imposing than VCU, but not anywhere near as quick or athletic.

In the first half, the defensive pressure doesn’t really start to have an impact until about the 10-minute mark. VCU is all arms and energy, and it clearly bothers the bigger Drexel team. If there’s a criticism of VCU, one could argue their big men at times disappear -- Juvonte Reddic and D.J. Haley, a 7-footer, are long and lean, but not physically imposing. They tend to get out-rebounded (Drexel 41 rebounds; VCU 24). But the Rams’ intense ball pressure generates so many turnovers that it can negate a team’s size. It did Monday night.

VCU’s full court press is impressive no matter where you’re sitting -- either in the stands or on the couch. But at floor level it’s not havoc, but insanity. It’s easy to see how the Rams can suffer long offensive droughts, shooting clankers. They expend so much energy on defense it seems to take a toll on shooting, especially from long distance. A night after hitting 11 of 25 from behind the 3-point line -- most in the first half, when their legs had more bounce -- VCU hits only four 3s against Drexel. Only one of those came in the second half.

In the first 10 minutes, Drexel manages OK against the full-court press, but it’s short-lived. Even when a team effectively beats the press, and manages to move the ball up the floor safely, it runs the offense down and steals time. With just under five minutes left to play in the first half, for instance, Drexel faces an intense, trapping Ram defense, and by the time they get the ball across half court and set up the offense, the shot clock is down to 17 seconds.

This would seem like plenty of time to run some kind of offensive set, to get a decent shot at the basket, but the defense continues the press at half court, constantly pressuring the ball handlers, usually man-to-man. The effect wears the Dragons down. The 17 seconds leads to a tough shot, and a miss, and eventually a turnover on the next trip up the floor. All told, Drexel turns the ball over 18 times as VCU racks up a whopping 10 steals. (Quick facts: Did you know VCU ranks No. 1 in the country in both turnover margin and steals per game?)

VCU feeds off the crowd -- a third consecutive sellout, according to the CAA, setting an attendance record of 47,833 for the weekend -- and it seems to deflate anyone and everyone affiliated with the Drexel Dragons. The cheerleaders, the student section, even the members of the band seem dismayed. Many of the students stand arms crossed with long faces, gazing tepidly at the crowd. In this environment, everything about Drexel seems drab, uninteresting, overmatched. VCU is a glittery, well-oiled machine now -- from their savvy, swinging band to the Gold Rush dancers to the rowdy, sometimes intimidating student section behind the basket -- and you don’t really notice it until you see the other team. Even Drexel’s gold is duller than VCU’s, down to the cheerleaders’ pompoms.

Still it’s hard not to like the Drexel team, which had won 19 games in a row entering Monday night. Their sophomore guard, Frantz Massenat, from Ewing, N.Y., is a silky smooth shooter and slasher, with a name that’s tough and sexy, German and French at the same time. The font size of the names on the backs of Drexel’s jerseys are larger than the average team’s. And their coach is animated and brusque. His nickname is “Bruiser.” After the game, he made no excuses for his team. Yeah, it kind of sucked that they had to play the championship in Richmond, against the hometown Rams, but he refused to complain about it.

“It is what it is. It’s always been down here,” Bruiser Flint said of the CAA tournament remaining in Richmond, despite the general dumpiness of the Coliseum. “The thing that’s been tough is they’ve been really good. I don’t think anybody would complain if they weren’t a good team.”

For the next week, at least, Richmond can have its cake and eat it too. If anything, this year’s team seems to validate that the Rams -- and Shaka Smart -- are no fluke.