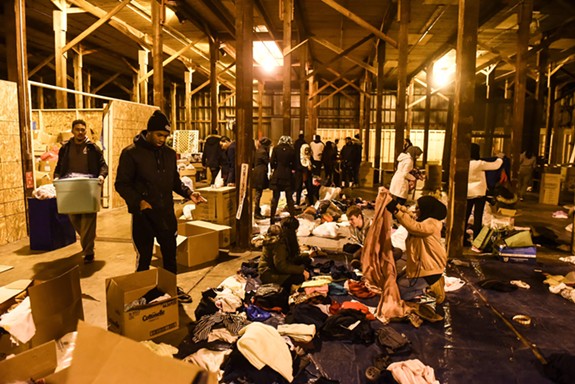 It’s 28 degrees outside and not much warmer inside a Manchester warehouse. Stacks of boxes and piles of clothes cover a tarp on the cement floor. About 70 volunteers, mostly Virginia Commonwealth University students, are spending Friday night at what looks like a garage sale.

“We had a month to fill up this 40-foot container, to collect clothes and get our medical supplies and fill up the truck,” says Rooma Elnasseh, president of United2Heal. Now they must sort, pack and stack the pieces of Richmond that will find their way to Syrian refugee camps on the Turkish border.

Richmond-based United2Heal collects unwanted medical supplies from local hospitals for places in need all over the world. Bon Secours, VCU hospitals, clinics -- “there’s millions of dollars of excess medical supplies that just get thrown in the trash,” Elnasseh says.

Syrians are in need. Their country’s six-year-old war has killed around 400,000 people, injured more, and displaced around 4.8 million, the United Nations reports. Many refugees have found their way to camps with little more than the clothes on their backs.

“Syria needs almost anything we can give them,” says Ali Salman, a second-year medical student in United2Heal. This is the fourth shipment to Syria they’ve organized.

NuDay Syria, a New Hampshire-based nonprofit, will take the supplies to Norfolk and load them on a ship bound for the Turkish-Syrian border.

“The situation is really bad,” says Elnasseh, a senior. “Our work is very valuable but, of course, we can’t serve everyone. So my view is like, I’m going to do, as an undergrad, the best that I can do. And the best that I can do is send these thousands of dollars of medical supplies, clothes and as many essentials as possible.”

The bundled up crowd of students seems eager to partake. “It’s a blessing to us to have this opportunity to serve people like this,” Salman says.