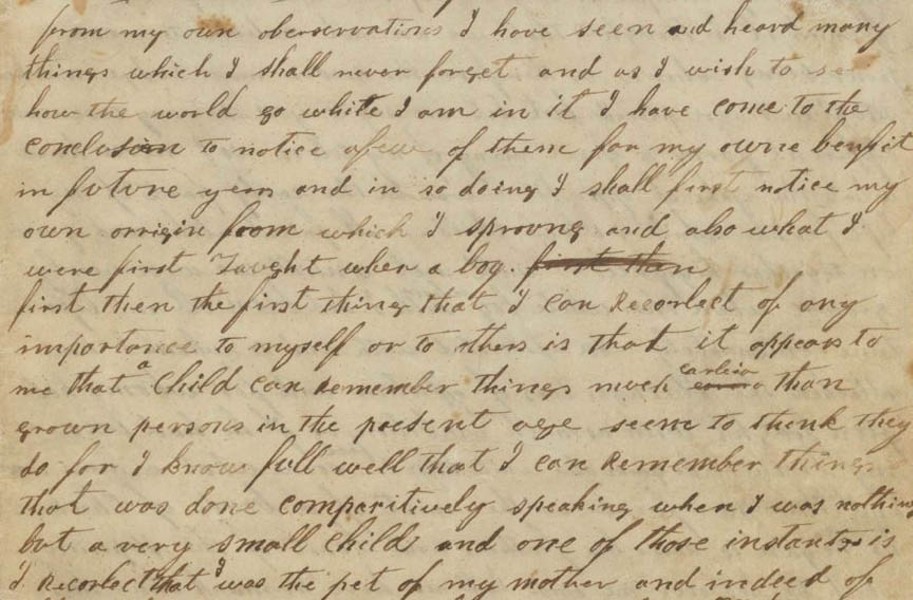 Lines from a 37-page manuscript written by slave Fields Cook from 1847.

You never know what you might find tucked away in a box at the Library of Congress. Ask Katherine C. Bassard, an English professor who teaches African-American literature at Virginia Commonwealth University.

Bassard is in the process of putting into digital form what may be the only surviving manuscript written by a slave before the Civil War.

Bassard located the 1847 document, "A Scetch of My Own Life by Fields Cook," in a box labeled "African American miscellaneous" after following the footnote of a previous scholar. The 37-page manuscript wasn't catalogued or attributed to Cook.

"It's a beautiful document, it's been preserved well," says Bassard, who also serves as senior vice provost and has studied slave narratives for more than 20 years. She confirmed that Cook was the writer by following a paper trail of his life, she says.

Originally from King William County, Cook notes in the manuscript that he was taught to read by his master, and hid small, 19th-century books in his hat. A former barber, Cook was able to trade real estate and buy his and his two sons' freedom in 1850.

Prominent in Reconstruction politics in Virginia, Cook unsuccessfully ran for Congress as an independent in 1869 and later had his own library. His life ended when he was a pastor of a church in Alexandria, Bassard says.

Bassard received permission from the Library of Congress to create a digital edition of the manuscript. With the help of English professor Joshua Eckhardt and two graduate students, Talesia Johnson and Janel Holmes, Bassard is turning the document into a free download, to be digitally published by British Virginia. It still must pass peer review, she says, so no date's been set for access at VCU's Scholars Compass, a website.

"[Cook] was a resourceful, entrepreneurial thinker which is not something we expect to find that early in Richmond," she says, adding that the document also is remarkable because it contains a romance story with his wife, Mary.

"We really get the sense of an individual who is having to survive within an institution," she says. "In most slave narratives, the individual is secondary."

"The document ends abruptly with him talking about Nat Turner's rebellion and how it was a shame because African Americans had to get rid of their books," she says.

The library is uncertain who gave the document to it in 1902, says Bassard, who plans to explore a print version that would include more biographical information she's gathered about Cook.