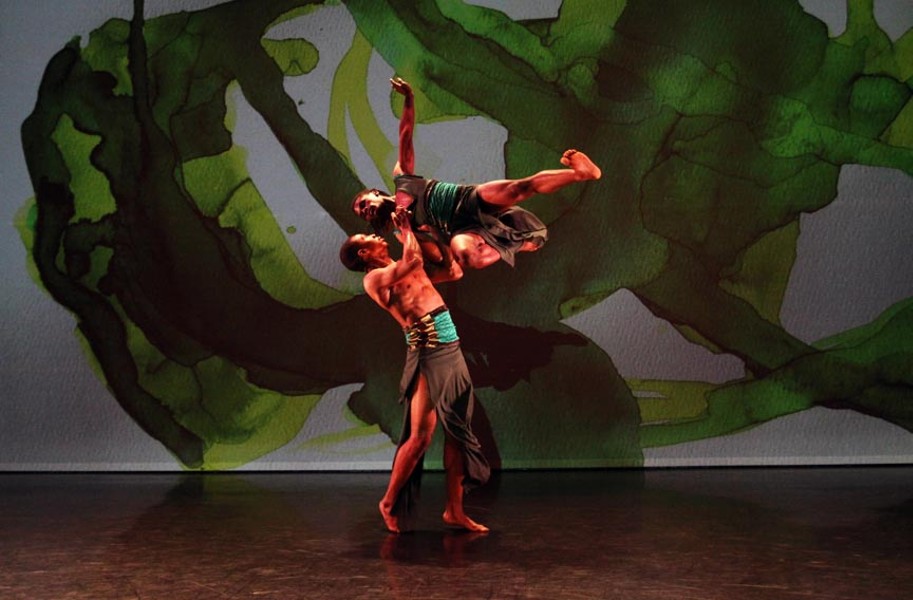 VCU Dance is marking 35 years with a season promoting diversity and innovation — and E. Gaynell Sherrod is ready to celebrate.

“I’m calling this our ‘throw glitter’ year,” says Sherrod, who’s in her second year at the helm of a program recently ranked among the top 10 schools for choreography by the Seattle Post-Intelligencer.

“She is a really high-energy, super-focused individual,” professor and former chairwoman Martha Curtis says of Sherrod. “She has a wonderful background, dancing with two of our nation’s finest dance companies — Philadanco as well as Urban Bush Women — and she has a doctorate from Temple University in dance pedagogy and theory. It’s been a real surge of energy.”

Sherrod brings something else to VCU Dance: connections from her 15 years of performing and four years as director of dance education for the New York City public schools. A Fulbright-Hayes scholar who did her dissertation on African-derived dance and music, Sherrod also adds perspective to a university in which nearly half of the dance majors and student body identify as nonwhite.

“I think that we’re looking at our curriculum in terms of increasing its diversity,” says Lea Marshall, VCU Dance associate chairwoman, and a contributor to Style. “Most undergraduate programs in the country focus on Western concert dance forms — ballet, modern and contemporary dance — so we will preserve that but also enhance it with West African dance, some jazz, hip-hop. We’re looking at ways we can tie in a diverse range of American and other world dance forms.”

Also joining the faculty as an associate professor is Eric Rivera, who danced with Ballet Hispanico. “He’s a really fine teacher and very dedicated to mentoring students,” Curtis says. “Dr. Sherrod is also a force of nature in that area.”

In February, Richmond dance aficionados will have the opportunity to see “Torobaka/Flash: the Cultural Intimacy Project.” The program features two different duets: “Torobaka” is a duet between flamenco dancer Israel Galrán and classical Indian kathak dancer Akram Khan. “Both have a tradition of percussive footwork,” Marshall says, “so it makes a cross-cultural dialogue.”

Bringing the duets together was Marshall’s idea, and it required a Herculean effort of grant writing and collaboration with the Modlin Center. In preparation, VCU Dance students will have workshops in flamenco and kathak.

The other collaboration, “Flash,” is a duet between hip-hop artist Rennie Harris and Butoh dancer Michael Sakamoto.

“Both forms kind of emerge from ideas of the body in crisis,” Marshall says. “Hip-hop was created by an oppressed population and it emerged in a vernacular form; it physicalizes oppression within the dominant culture. The origins of Butoh are contested, but it emerged in post-war Japan, in the aftermath of Hiroshima and Nagasaki. It definitely speaks to the experience of crisis and physical stress.”

Some of the artists from “The Cultural Intimacy Project” will work with the dance students and give community workshops.

“The 21st-century dancer is a dancer that needs a lot more globalized, embodied information,” Sherrod says. “They need to have it in their bodies. Students are going to Paris, Israel, Asia, India, Brazil. And those students come here. And we share all of this information in our bodies. With that comes, or it should, a cultural understanding. Because that information that is embodied is also part of the cultural tradition. Embodied knowledge is oftentimes more than just an actual movement. Oftentimes it tells you where a movement came from and the movement is a reflection of the people who created it and hence that society that grew from the people.”

Marshall stresses that increasing the cultural diversity of the classes offered is an addition to a core curriculum that doesn’t replace the fundamentals. She says their strengths always have been fostering students’ creative potential as dance-makers as well as their technical chops.

“It’s not as common in an undergraduate program to have an equal emphasis on choreography and dance performance,” she says. “It does set us apart in a way we want to maintain.”

Sherrod, Marshall and Curtis all expect the infusion of new ideas to push the creative envelope for students and faculty alike.

“Let’s collide with one another a little bit in our aesthetic and cultural backgrounds and learn from each other,” Curtis says. “A playful collision. It’s an exciting place to work.” S