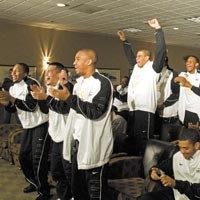 If Virginia Commonwealth University ever needed good PR, it would be now, in the Founders Room balcony overlooking the Siegel Center.

It's a good bet. The men's basketball team, having secured the Colonial Athletic Association championship a week earlier, was guaranteed a spot in the NCAA tournament. On Selection Sunday, the players sat in Ram-embroidered chairs, relaxed, if not a bit anxious, awaiting the team's name to be called.

So perhaps it's odd that the room is mostly static. The team's coach, Anthony Grant, is in the back of the room, expressionless and seemingly emotionless as always. The grand patriarch, President Eugene Trani, sits stone-faced in a bar chair, his legs crossed. He name is stitched onto a black jersey hanging from the rafters (1990-2009), a memento of sorts. His time's up, and this should be a happy occasion following a year of turmoil and scandal.

It could be that he just doesn't like Style Weekly. He glares at this reporter after a brief hello. “I didn't have a heart attack,” he snipes, referring to a previous story that inaccurately described the chest pains he felt in his office a year ago, and led to quintuple bypass heart surgery. “Get your facts straight.” [See “Correction” page 5.] He's feeling better, but you might not know it.

Students and alumni stormed the court like a popped pressure valve March 9 after the Rams won the CAA tournament. Two years ago the Rams knocked off Duke University on a last-second shot by point guard Eric Maynor, who will likely go in the first round of the NBA draft this year.

Thursday they get UCLA, another hoops dynasty, a year removed from the Final Four. Some commentators are already calling VCU the potential Cinderella of the season (sorry, George Mason). All this seems like something to celebrate. Grant cracks a smile for the cameras but doesn't quite see the added relevance. You know, how VCU needed a shot in the arm after former Richmond Police Chief Rodney Monroe's degree scandal, VCU Police Chief Willie Fuller's arrest for allegedly soliciting sex with a minor and the uproar over those secretive research contracts with Philip Morris.

“I honestly don't think about that stuff,” he says. Trani does, though, he just wishes we could get our facts straight.