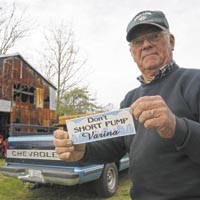 Bill Gallmeyer is no stranger to politics. The Rush Limbaugh-loving Varina farmer hosted President George Bush two years ago while the commander-in-chief stumped a candidate for an open U.S. Senate seat.

This year, Gallmeyer has his own political message: “Don't Short Pump Varina.”

That message, emblazoned on stickers sported by Gallmeyer and other Varina residents, is part of a campaign by Envision Henrico, a group of mostly Eastern Henrico County residents concerned that expanding pavement may soon obscure otherwise pristine rural landscapes.

“We'd like to see farm land staying farm land as much as possible,” Gallmeyer says. He sees rampant suburbanization, encouraged by Henrico County's proposed 2026 comprehensive land use plan, as the greatest threat to the one area of the county that remains mostly rural.

The stickers are the brainchildren of Lynn Wilson, a Varina resident and Envision member. She presented the first of her inaugural run of 500 stickers to Gallmeyer.

“The threat is that there's nothing about this plan. … that prevents Varina from becoming Short Pump,” she says of the 2026 plan. “Short Pump used to be farms and fields and green space and now it's become synonymous with pavement and gridlock. We'd like to think the county has learned some lessons from the West End.”

The stickers are so far only available at local produce stands, she says, including Gallmeyer's two stands on Darbytown Road and Miller's Lane and at Mark's Produce on Cold Harbor Road in Mechanicsville.

Wilson says she hopes this will be her last foray into political sign making: “I don't want to see a bumper sticker 10 years from now that says, ‘Don’t Varina Charles City',” she says. “That would be a doggone shame.”