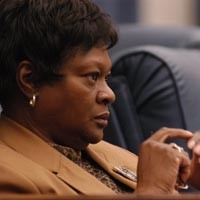 The mass e-mail addressed to “the citizens of Richmond” — with an attached petition in opposition to Cynthia Newbille's possible appointment — began circulating late last week.

Newbille, the acting executive director of the United Way's Family Resource Center in Church Hill, has become a subject of discussion in the blogosphere, with some alleging she doesn't reside in the 7th District. In a State Board of Election campaign donor filing for Mayor Dwight C. Jones in October, Newbille lists a Henrico County address. The Henrico registrar's office does not list her currently registered to vote in the county. Style could not contact Newbille by press time.

“People need to be made aware that Henry Marsh and Delores McQuinn are asking City Council members to appoint a person to the vacant 7th District seat they have moved in from out of the 7th District,” a letter with the petition states. Similar accusations have been popping up on the popular blog, Church Hill People's News, for the past week. Marsh, a state senator who has close political ties to Mayor Dwight Jones and to McQuinn, is said to be orchestrating a push for Newbille's appointment.

The e-mail petition request has also been posted on the Church Hill blog chpn.net. As of Monday, the online petition had 37 signatures. The blog's host, John Murden, has declared his own interest in McQuinn's vacant seat.

And though he disavows connection to the petition, former School Board member Keith West has rumored involvement in the petition. West is also rumored to be seeking the seat, or at least the City Council appointment.

As rumors fly regarding efforts to seat Newbille, the crowded field of possible appointees is shaping up as a harbinger of the November election. The 7th District is majority black, but swiftly giving way to gentrification and young professionals. In addition to West and Murden, a handful of others, including Electoral College state delegation member Betty Squire, and outspoken city historic preservationist Jennie Dotts, are also vying for the vacant seat.

“This arrogant political power play cannot be allowed to proceed uncontested,” the author of the e-mail writes of a possible Newbille appointment, imploring recipients of the e-mail to pass it to others.