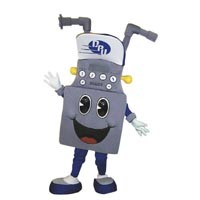 No, he's not the orphaned brainchild of Sid and Marty Krofft. But Utility Buddy — the dancing mascot of Richmond's Department of Public Utilities — certainly has crossover appeal similar to the 1970s live-action psychedelic Saturday morning puppet show H.R. Pufnstuf.

The saccharinely sweet mascot's target demographic may be elementary school pupils in need of firm but friendly utility-safety lessons, but to deny Utility Buddy's appeal among the region's aging stoner population would be remiss.

Indeed, it's a crossover appeal that the department seems to encourage in its marketing, which recently has included Utility Buddy-emblazoned Hacky Sacks — the sporty foot bags as ubiquitous on community-college campuses and amongst the coffee house set as Birkenstocks and the scent of patchouli.

“Kids love Hacky Sacks,” utilities spokeswoman Angela Fountain says, but “we thought Hacky Sacks skewed a little more toward middle school, so we also have stickers and magnets and activity books that we give out. Oh, and temporary tattoos. Our elementary kids love the tattoos.”

So do bikers, but Utility Buddy doesn't seem to be gaining the same traction with that crossover demographic.

“He's a friendly gas meter,” Fountain says, explaining the nuances of the character, whose stupefied smile and vapid stare render him instantly charming to both children and High Times magazine subscribers. “He's a gas meter, but he has pipes that come out of him that represent our water utility and storm-water utility.”

Utility Buddy also has an active social life — both on Facebook and through his regular Twitter posts (@UtilityBuddy) — that would belie his tender age of 10.

Mostly his tweets are about utility work and road closings, but he's also been known to get personal with fellow tweeters — and a bit frisky.

“The Goochland Gazette editor proposed marriage to him over direct messages on Twitter,” Fountain says. “She was being flirty with him.”

Coincidentally, Amy Condra, the editor in question, is in Nevada for two weeks, and unavailable for comment. Among other things, Nevada is famed for its quickie marriage laws.

Utility Buddy was unavailable for a photo because “he's at the cleaners,” Fountain says, ending speculation about a possible Vegas rendezvous. “He's too young to have a girlfriend.”