Révéler in Carytown provides an intriguing escape from the norm. 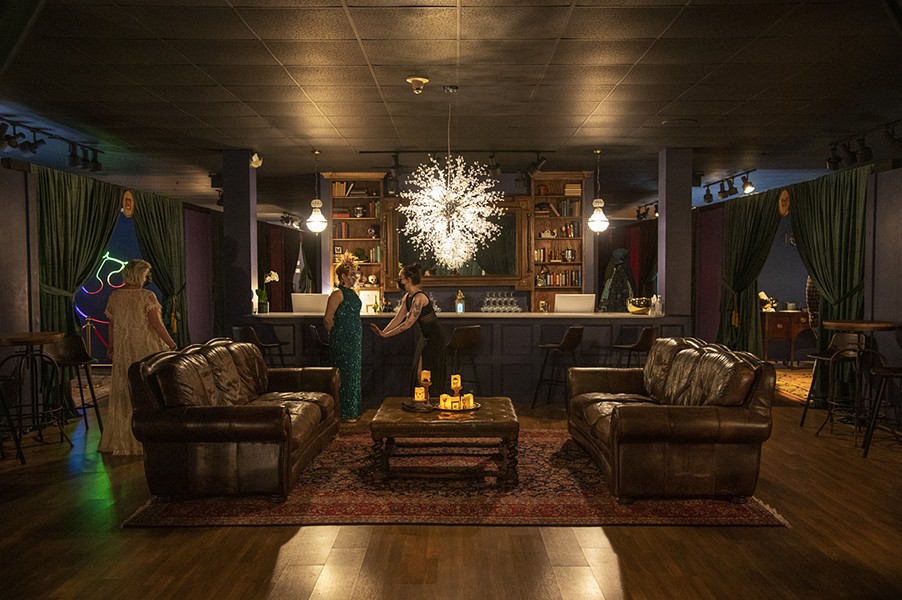 Scott Elmquist The lobby and bar of Révéler, a new theatrical game venue in Carytown that offers “curiously curated experiences.”

The door opens at 2 o’clock, and we’re welcomed into a darkened room. Once our eyes adjust to the light, we make out some overstuffed leather furniture, a piano and a bar serving complimentary cider and sparkling wine.

The flirtatious bartenders hand out drinks as other guests enter and talk excitedly between sips from their coupe glasses. Before long, our hostess appears. Clad in a shimmering green dress, a white mesh veil and a theatrical persona, she informs us that two brilliant scientists have invited us to audition for entry into a cabal that celebrates the joining of the artistic and scientific parts of the brain.

As part of the audition, we’ll have to complete creative assignments that will be monitored remotely by the scientists.

Think you’re up to the task? Josh Czarda believes so. This is Révéler, Czarda’s immersive experience that describes itself as “a mystery wrapped inside an enigma wrapped inside a riddle, washed down with champagne.” Located in Carytown, Révéler opened last month in the space that formerly held furniture store Ruth & Ollie.

Czarda’s interest in creating these quirky experiences began roughly two decades ago when he was trying to cheer up his younger brothers. The boys’ mother was in the hospital undergoing cancer treatment, so Czarda devised a treasure hunt at Old Rag Mountain using a GPS and a metal detector. The boys loved the game, as did Czarda’s friends. 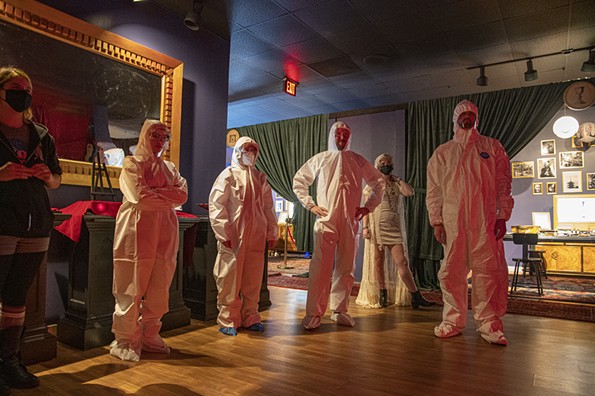 At their encouragement, Czarda began Ravenchase Adventures, a company that aims to provide fun experiences that deviate from the norm. Just two weeks after putting up Ravenchase’s website, Czarda received his first commission: a 200-person James Bond-themed event off the coast of Malta. Since then, Ravenchase has created simulated bank heists, “Da Vinci Code”-themed runs through the streets of Paris and business events where employees have saved their “kidnapped” CEO.

Czarda’s clients have included Fortune 500 companies, former New Orleans Saints quarterback Drew Brees, Brad Pitt and Matthew McConaughey. He’s also fashioned events for the creators of “The Great Race,” “National Treasure” and the “Pirates of the Caribbean” franchises. For the Indianapolis Colts he devised a game that gave away six Super Bowl rings.

In 2015 he opened Escape Room RVA in Henrico’s Village Shopping Center, offering escape rooms where participants may find themselves breaking out of Hannibal Lecter’s study or raiding a wizard’s magic shop, among other endeavors. Since then, Czarda has expanded to create escape room experiences in Arlington and Herndon, as well as Warehouse 29, a large immersive theater experience in Richmond that combined virtual reality with escape room tricks; though popular, the latter closed at the beginning of the pandemic.

The idea for Révéler came through Czarda and his colleagues trying to alleviate their boredom in the pandemic.

“We started noodling around with the idea of the next form of entertainment, something that was very, very different than an escape room but still had that physicality to it,” Czarda says. “We wanted to make mystery experiences with things that people wouldn’t commonly do in their life.” 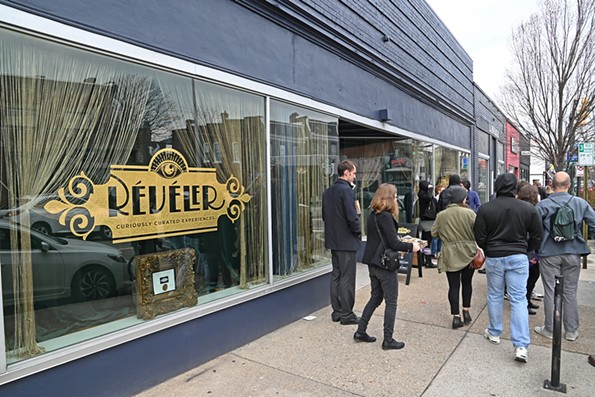 Those experiences include creating an animation with sand art, tattooing a dummy, taking a polygraph test, sketching a nude figure, and creating animations with lasers. Following that round of tasks, attendees take part in a large group event that might include a neon paint party, a pie fight, or painting the silhouette of a person’s body. The pie fight is Czarda’s favorite.

“That’s one thing [most] people have always wanted to try in their lives and never have,” he says, adding that it’s taken some people aback. “Some people love it, [think] it’s hysterical, and some people are very surprised, even though they’re in full protection with goggles and a Tyvek suit.”

Christina Pearlman, Czarda’s creative partner and co-owner in Révéler Immersive Experiences and Gnome & Raven, says she hopes to get people to see the world a bit differently through these unique games. “I hope that people walk away experiencing something that they previously had not, and, ideally, have conversations that they would not have had,” she says.

So far, Czarda says feedback has been positive, and that he’s enjoyed watching people engage their creative side.

“You can tell they have raw talent, and you can tell it brings them joy,” he says. “It’s fascinating when its also [an activity] that they haven’t tried before and they’ve surprised themselves. That part I’ve liked a lot.”