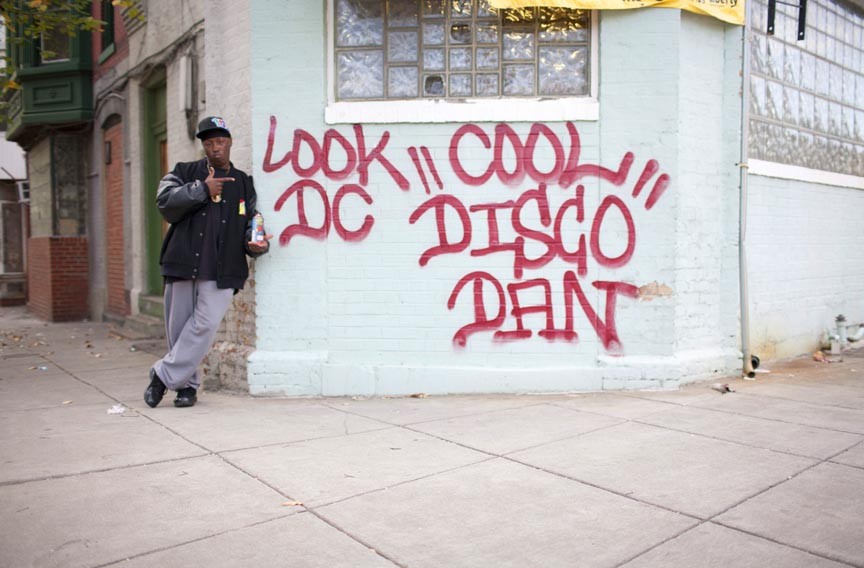 In the 1980s, Cool Disco Dan used spray paint to write his name throughout the urban neighborhoods of Washington, ultimately leaving his mark beyond the structures he tagged and onto history. His signature became a flag that politicians, drug dealers, skateboarders and the hard-working residents of the district all recognized. A reporter called him an "urban phantom." But filmmakers Roger Gastman, the executive producer, and Joseph Pattisall, the director, who were immersed in Washington's urban culture back then, got to know him much better than that. "The Legend of Cool Disco Dan," which will be shown at the Byrd Theatre on Thursday, Sept. 5, is their long-gestating look back at the capital city and the man who signed his name to it.

Style: How did the project start?

Gastman: I grew up in Bethesda, Md., running around writing graffiti, going to hardcore shows in the early 1990s, and Cool Disco Dan was the legend. From a crackhead on the street, to a lawyer, to a taxi driver, to someone that works in a restaurant — everyone knew who Dan was. I met Dan through some mutual friends and he started staying at a bunch of our houses. We were out writing graffiti with him. ... I started traveling to different cities and people were very aware of who he was. Years later, I started doing a small graffiti magazine called While You Were Sleeping, which I featured Dan in. A few years later, I went to do a book about Washington, D.C., graffiti, which Dan was of course a large part of. I decided to do a book just about Dan, researched it for years, tons of interviews with Dan, people he knew, etc. So one day, we were like: "You know what? This story is big. Let's start filming it. D.C.'s changing, let's capture it."

Some say that Disco Dan's ubiquitous signature was a sign of urban decay and that he was a criminal.

Gastman: Well, I've never denied that Cool Disco Dan was doing illegal activities. I don't think Cool Disco Dan will deny that he was doing illegal activities. Graffiti in its purest form is an illegal act. And yes, he was vandalizing things, but it was also a signature to the city. People recognized it. It gave a lot of people a sense of ownership, of pride. It really was not looked at by almost anyone as traditional graffiti ... it was readable, it was legible ... and so many people grew up with that signature that it was more just a sense of hometown pride.

Is the film more about Disco Dan or the city he lived in?

Pattisall: The movie is Dan's story, but D.C. is actually the main character of the movie. Because it tells all these really important stories that happened in D.C., starting with the civil rights movement, through the emergence of go-go, neighborhood crews and inner-city culture, through other things that started too, such as hardcore and straight edge, into when drugs came into the city and then homelessness became a really big thing ... all the way up to the gentrification that's going on now. It's that story through his eyes. It's the story of the effect he had on a city and in turn the effect the city had back on him.

As two white guys documenting African-American culture, did you meet any resistance making the film?

Pattisall: We didn't necessarily meet resistance — definitely a lot of skepticism, trudging through some dangerous areas of Washington, D.C., digging up old gangsters from the '80s. Sure people probably thought we were a little crazy.

So where is Disco Dan now?

Pattisall: When you see the movie, you'll see that ... he's still Cool Disco Dan. He's not doing graffiti anymore, but he is the exact same person, he is a perfectly preserved person of 1980s Washington, D.C., culture.

How has Washington changed?

Pattisall: I can say that it's changing into something that can no longer be called the Chocolate City. I think that very sadly, a lot of residents have been pushed out of D.C. and pushed into P.G. (Prince George's) County, due to gentrification and due to D.C. wanting to clean up its image. Several mayors have been in office since Marion Barry, and it's a different place now. All things change — it's part of the cycle of life.

Gastman: I think the story of Richmond is very different than D.C., [but] there's a lot of similarities. People will be able to relate. S

Presented by Steady Sounds, "The Legend of Cool Disco Dan" shows at the Byrd Theater on Thursday, Sept. 5, at 8:30 p.m. Admission is free. A question-and-answer session follows with the executive producer and director. For information call 308-2692.