UPDATE: Some Final Details on Pharrell's Something in the Water festival at Virginia Beach 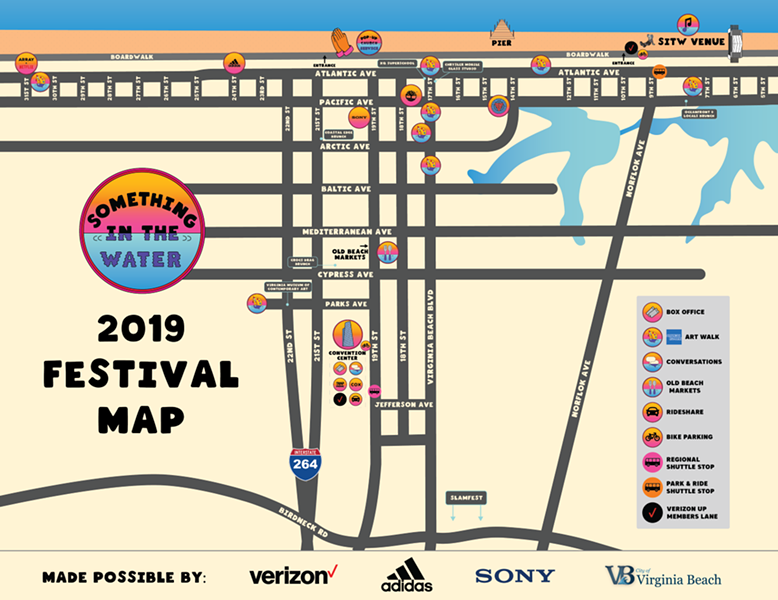 VIRGINIA BEACH-Something's about to take over Virginia Beach.

Starting Friday, the Oceanfront will play host to a much-hyped, long-awaited festival pioneered by music phenom Pharrell Williams, a Beach native. [Here is a list of the performance schedules.]

Something in the Water has sold out 35,000 tickets and will feature more than 30 celebrity performers such as Gwen Stefani, Dave Matthews Band, local rapper Pusha T, Migos and others showcasing their talents over three days. A pop-up church, speakers, art and film will also be woven into the weekend celebration.

The name is a nod to Pharrell's hometown and the talent it's sprung. If successful, Something in the Water could become a recurring affair on the scale of South by Southwest in Austin or other well-known music fests. At least that's his hope.

The city has been preparing for the event since fall. It's been touted as a way to make a positive name for the resort city. It's also overlapping with College Beach Weekend, an informal gathering of students who spend spring break here at the end of April.

Whether you've got tickets to the Something in the Water festival or you want to know what's happening — or even how to avoid the area entirely — here's a list of tips for getting around.

The entrance to the festival is near 10th Street. It opens at 2 p.m. Friday and noon on Saturday and Sunday.

Shows will take place rain or shine. Lightning could cause cancellations, and Friday's forecast looks challenging.

The schedule is posted on the festival's social media outlets and on somethinginthewater.com. Lineup and show times are subject to change without notice.

Lockers with unlimited cellphone charging are available for purchase on the festival website.

Text SITW to 226787 to subscribe to emergency alerts and updates from the city.

Going to the festival or just trying to get around the Oceanfront? Here's some tips for navigating the resort area.

A 24-hour residential parking permit will be enforced throughout the resort neighborhoods. Employees with permits may park in those areas.

No through traffic will be allowed on the south side of Norfolk Avenue for the Shadowlawn neighborhood near the Oceanfront.

Want to know what roads to avoid? The following will be closed or have restricted access:

RESTRICTED ACCESS: 19th Street — vehicle traffic will be restricted to one lane eastbound only from Cypress to Arctic; the rest for pedestrians. Police will maintain access for 19th Street residents.

RESTRICTED ACCESS: General Booth Boulevard from Croatan Road to 5th Street. (Northbound No. 2 lane only will be dedicated for event shuttle/priority vehicle/emergency vehicle use).

Virginia Beach has partnered with the GPS app Waze to alert drivers to traffic delays and road closures. For the most up-to-date information, as well as directions to the park and ride and rideshare lots, download the free Waze app for iOS or Android. Visit waze.com.

On Thursday, festival organizers announced that tickets for the park-and-ride shuttles are sold out.

How else can you get around? Uber or Lyft are an option. There will be a drop-off and pick-up area at the Convention Center. Or ride a bike. Bicycles can be rented at some hotels and from private bike rental companies.

Parking No festival parking is allowed at the Convention Center. But a ride-share drop-off and pick-up area will operate there.

A trolley shuttle will arrive at the Convention Center every 15 minutes (depending on traffic) between 8 a.m. and 2 a.m. and drop off at stops along Atlantic Avenue. Download the GoHRT Mobile app to pay by phone.

Limited parking will be available in public and private lots, public garages and at metered spaces.

What you need to get in

If going to the festival, you need a wristband to enter the main stage area. Festival planners have recommended attendees arrive in Virginia Beach on Thursday or early Friday morning.

Wine and beer only will be sold at the festival.

Not drinking? Sober Beach, a program that provides support and information for nondrinkers, will be in a designated area during the concerts.

No outside food or beverages will be allowed in the concert zone. Uber Eats Window will be offering samplings from local restaurants and vendors will be selling food and merchandise.

People can bring beach towels and one empty reusable plastic water bottle under 32 ounces. Sunblock lotion is allowed, but sprays are not. Single-compartment bags, fanny packs and clutch purses under 14 inches are permitted. Only sealed packs of cigarettes are allowed.

A phone camera or a small point-and-shoot without interchangeable lenses is permitted. No video cameras (Go-Pros are cool, but no poles or extenders) or professional cameras will be allowed into the event.

Anyone bringing prescription medication or a syringe for medical purposes (including EpiPens) will need to show medication, prescription label and a photo ID at the festival entrance. Notify a security guard, and the medical staff on site will assist you.

Firearms, drones, drugs and fireworks are banned. Medical marijuana or marijuana of any kind is not permitted at the event. Blankets, beach chairs and large bags are not allowed in the concert area.

Nature calls The city's public restrooms on 17th, 24th, 30th and 31st streets will be open 24 hours a day with an attendant. The festival production company will rent hundreds of portable toilets from private companies.

The 5th Street stage area will have 332 portable restrooms, 21 handicap-accessible restrooms and 60 hand-washing stations in three areas. VIP areas will have trailers with an additional 22 restrooms.

The Pop-up Church service starts at noon Sunday on 20th Street. It's free and open to the public. Casual and comfortable attire is recommended. Seating is first come, first serve. Shuttle pickup locations are Military Circle Mall and Greenbrier Mall. Visit the website for more information.

Other festival "activations" include an Adidas basketball event on 24th Street and a Sony dome experience on 19th Street. Guest speakers will be featured at the Convention Center. Check the festival website for details.

The Oceanfront Library will be closed Friday-Sunday.

Sources: City of Virginia Beach, Something in the Water