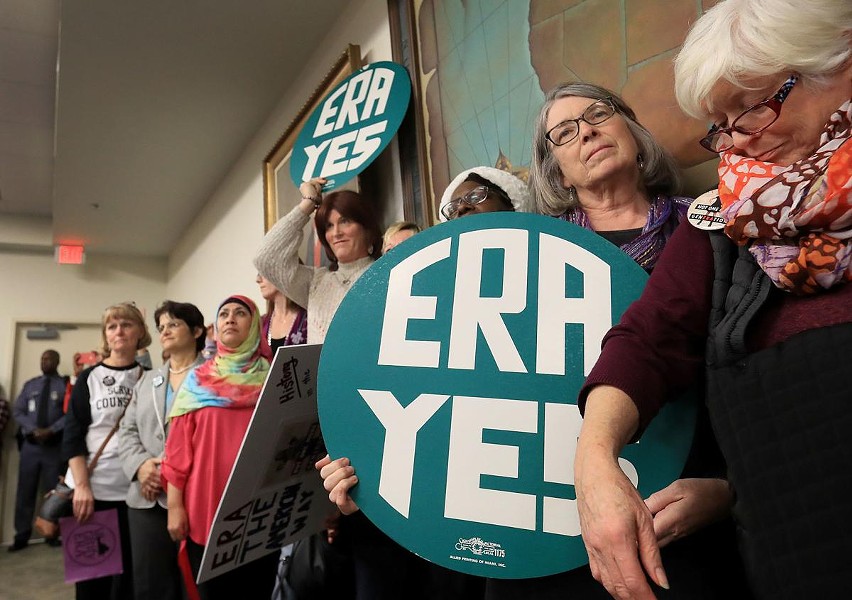 Rob Ostermaier/The Virginian-Pilot Supporters for the ERA at a Jan. 9 meeting.

Will Jan 22’s redistricting decision handed down by the U.S. Court for the Eastern District of Virginia convince House of Delegates Speaker Kirk Cox, R-Colonial Heights, to allow the Equal Rights Amendment to come out of committee and onto the floor for debate and a full vote?

Proponents of the ERA are hopeful it could. According to the Virginia Public Access Project, the court’s decision would have profound effect on Cox’s district. The decision would remove rural areas and shift the district’s boundaries north into the Chesterfield County suburbs closer and closer to Richmond. The project reports that the speaker's district would experience a dramatic Democratic shift, the equivalent of 32 percentage points more than past election results.

Contacted before the subcommittee met on Tuesday morning, Delegate Schuyler VanValkenburg, D-Henrico, a member of the House Privileges and Elections Subcommittee, says that “barring divine intervention,” he doubted that the ERA resolutions would get out of subcommittee or committee. He added that he is “certain that if it can get out of committee/subcommittee, the ERA would prevail.”

Similarly, Delegate Delores McQuinn, D-Richmond, addressed the speaker this morning noting that the ERA is significant “to me as a woman and to millions of other women. Mr. Speaker, words are indeed powerful, whether written on paper or said aloud, they are powerful. … I believe change will come.”

Speaking for the VA Ratify ERA group lobbying for passage, Katherine Jordan noted: "We remain hopeful that Speaker Cox will send the ERA to the House floor where we have the votes to pass it. Our focus is on his power as Speaker of the House since the Privileges and Elections Committee continues to signal they won’t support it. It’s anyone’s guess if the redistricting news will influence his decision."

Viola O. Baskerville, a former delegate, challenged Cox to allow the bill to come to the full body for a vote. “Nothing creates clarity in an elected official’s stand on issues like an impending re-election. With the change in the Speaker’s House district’s voter composition, now would be an opportune time for him to support passage of the ERA legislation winding through the House. He could signal to the Committee Chair that he wants that bill brought to the floor of the House. Mr. Speaker, it is past time for Virginia to lead.”