Up High: Developer Has Food Plans for Adam's Camera Building 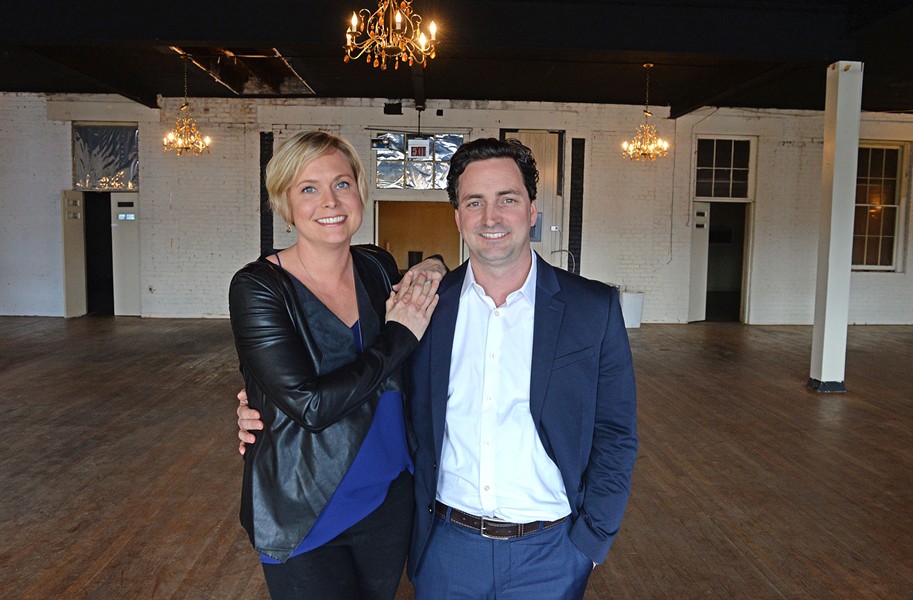 Carter Snipes is a man with a dream. Isn’t that the case with all developers? But his dream is specific: He wants to transform the old Adam’s Camera building into a restaurant or brewery with a rooftop bar, along with a spacious event space.

In 1928, Herold R. Hofheimer built the Hofheimer Fine Rug Cleaning Co. on West Broad Street between the Boulevard and Sheppard Street. It’s a distinctive building in the exotic revival style, a vaguely Moorish style architecture. According to Snipes, the design may have been chosen because the builders used some decorative tiles left from the Mosque Theater, now the Altria Theater, built in 1927. It’s a striking facade. But what makes the building more interesting is the freight elevator that can take future diners from a ground-floor restaurant to the enormous roof. Easy access — always a problem when dealing with a destination several floors up — is rendered moot.

Existing steel structures, originally built to dry rugs, mean that a covered area can be erected to shelter a large part of the roof. It’s a gritty view — the industrial architecture of Scott’s Addition and the sagging retail of Broad Street aren’t at their best in the daylight. But from high up and at night, all that urban grime becomes so many twinkling lights with a promise of fireworks in the summer.

The building is a mostly cleared industrial space now. Peter Chang was interested in it, but didn’t want to deal with a rooftop bar. Pizza Tonight has taken a look, and a few breweries are under consideration.

The most interesting idea Snipes proposes is to create a brewery incubator. The concept has gained momentum throughout the country in places as varied as Houston, Cleveland and Burlington, Vermont. Start-up costs — equipment, marketing, branding — can keep a home brewer making beer in his basement indefinitely.

By providing equipment and mentorship, that beer lover with a great recipe can turn his passion into a business with little capital investment. Think of it as contract brewing, Snipes says: “Five or six microbrewers could go in [together].” And a taproom on-site would provide a way to introduce the new beer to consumers.

Snipes, along with his co-owner and wife, Annie, plan to meet with the public and the James River Homebrewers on April 15. They hope to get a feel for how viable the plan might be.

“One of the biggest challenges as a developer is that when you find a cool property, a unique property like this, and you want to do something different,” Snipes says, “you have to kind of get involved in the business and figure out all of the mechanics.”

The realization of the Hofheimer building project is still a way off. Special-use permits take time and so does construction. With a $1.4 million loan for the construction, however, it’s a plan with legs.