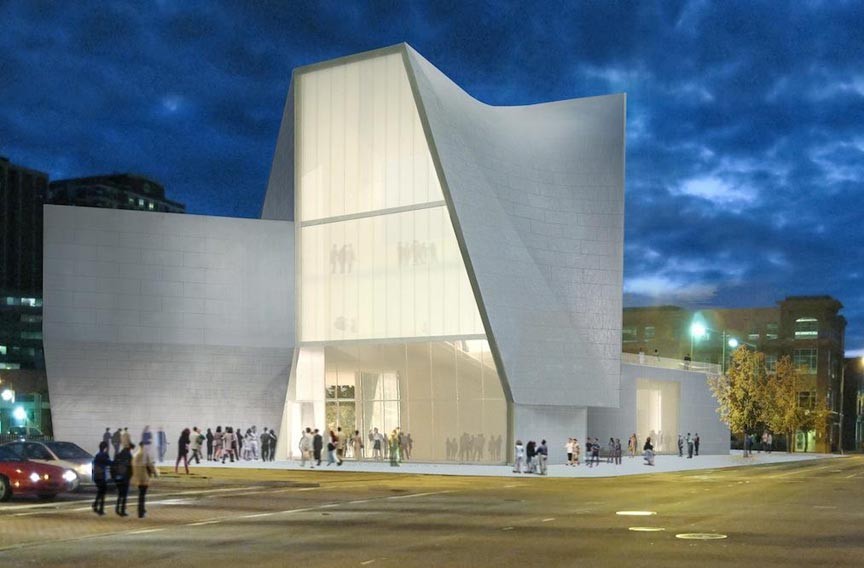 Construction cranes are scarce on the city skyline, but Virginia Commonwealth University hasn't slackened its building pace. Excitement is mounting for its proposed Institute for Contemporary Art. Envisioned as an architectural landmark for the traffic-clogged intersection of West Broad and Belvidere streets, the building is scheduled for completion in 2015. The university announced last week that it had speedily raised $20 million for the institute toward its $32 million goal.

Preliminary sketches, watercolors and models for the project by Steven Holl Architects are on display through Oct. 18 at the Virginia Center for Architecture at 2501 Monument Ave. The exhibit, "Steven Holl Architects: Forking Time," is a chance to share the thought processes of one of the world's most innovative active architects. Holl, who lives in New York and earlier this year received the profession's highest accolade — a gold medal from the American Institute of Architects — will talk about his design for the art institute at the university's Singleton Center on Oct. 15 at 6 p.m. Admission is free.

Elsewhere on the campus, the handsome West Grace South housing complex and the Laurel Street parking deck (designed by NBT Architecture and WDG) in the 800 block of West Grace Street are newly completed. A few blocks to the south, the new academic building (BCWH Architects) at Floyd Avenue and Linden Street takes final form. Farther east, the new School of Medicine Education Building, a 12-story structure by Pei Cobb Freed & Partners nears completion. It's already brightened up a gloomy and canyonlike stretch of East Marshall Street with its sweeping expanses of glass and light-hued masonry.

Across the river in Manchester, once-relentless stretches of vacant lots are rapidly being filled in with new townhouses and midrise apartment buildings. While mostly underwhelming architecturally, this infill reflects the repopulation of this oft-forgotten, but historic and topographically beautiful part of town. An exhibit called "What Do You See: the Manchester Project" at the Virginia Center for Architecture (through Oct. 7) reveals possible visions for the area. Take a look at the interactive kiosk created by a group of young architects that asked Manchester residents what they'd like the area to become.

The longer conversations this season will swirl around sports facilities. Talk about where — and if — to build a new baseball stadium will be big. Placing it in Shockoe Bottom, in this writer's opinion, would be irresponsible and insensitive in light of the fragility of the area architecturally and the unfolding narrative of black history in the area. More pressing is the development of a training site for the Redskins and what infrastructural enhancements must be planned to prepare for the 2015 World Road Cycling Championships. Let the games begin.