This “Taming of the Shrew” is funny, smart and thought-provoking with a standout all-female ensemble cast. 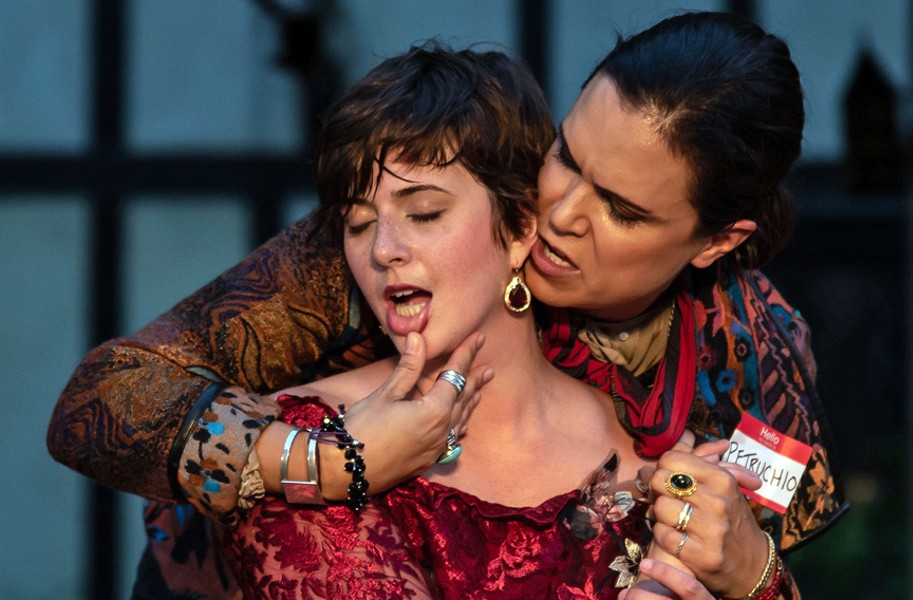 Aaron Sutten Michelle Greensmith as the fart-joke happy, titular shrew and Bianca Bryan as the swaggering and smarmy Petruchio in Quill Theatre’s “The Taming of the Shrew” at Agecroft Hall through Aug. 4.

Shakespeare's "The Taming of the Shrew" has long been the subject of great controversy. The play, which tells the story of a man who "tames" a smart, self-possessed woman into submission, reeks of misogyny. When one considers that, in Shakespeare's time, all of the actors portraying both male and female characters would have been men, it's hard to imagine an argument that saves it from such an interpretation.

But Quill Theatre's production now running at Agecroft Hall as the final show of the 21st annual Richmond Shakespeare Festival, features an all-female cast. It offers a refreshing perspective on the script and all that it implies, lampooning societal limitations placed on women then and now while providing a welcome subversion of Shakespearean theatrical conventions. Director Chelsea Burke and her cast of standout female performers have created something quite special here.

The show begins in a fashion befitting its historical period: with a troupe of merry players performing tricks and a few songs before choosing a play from a list to perform for the audience. The musical choices are significant, setting the tone for the play to come. They include a truncated rendition of the Flight of the Conchords' "The Most Beautiful Girl in the Room," and No Doubt's "Just a Girl," a song that takes on deeper shades of meaning as the play unfolds.

The women in this show are not here to be all pretty and petite. From the outset, they are behaving in unladylike ways: making fart jokes as actress Michelle Greensmith, who portrays the titular shrew, plays a pair of flutes through her nostrils.

The ensemble is excellent, featuring local favorites and some newcomers I hope to see more of on the Richmond stage. These actresses are clearly having a lot of fun, portraying the male characters as cocksure buffoons who treat women like bargaining chips, concerned only with money and power.

Bianca Bryan oozes swagger and smarmy charisma as Pertruchio, the one man with the confidence and ambition to attempt to woo Katarina the curst. He wants her for her dowry, and for the glory of the conquest, and Bryan's performance is comedic and terrifying.

As Katarina's father, Baptista, Melissa Johnston Price gives a commanding performance. Emily Berry's physical comedy as Petruchio's servant Grumio is an absolute delight throughout the show, and both Maggie Bavolak and Desirée Dabney are hilarious as Gremio and Hortensio, two older would-be suitors to Christina Ramsey's sweet, compliant Bianca, the ideal woman, according to the men around her. Nora Ogunleye is bashful and charming as Lucencio, the man who ultimately wins Bianca's heart, and these two have real chemistry. Allison Paige Gilman plays Lucencio's servant Tranio as a short guy with a Napoleon complex, to great comedic effect.

Lucencio's courtship of Bianca offers a counterpoint to Petruchio's methods, as Lucencio woos his love by spending time with her, albeit in disguise and therefore still rooted in deception. Even within this relationship, which seems pure and innocent at first, Lucencio places Bianca on a pedestal, adding limitation to admiration. Ogunleye's sweetness gives way to fury when Bianca costs Lucencio some money in a bet, showing that even in a mutually loving relationship, there are grave consequences for a woman who steps out of line.

Michelle Greensmith's performance as the witty, rightfully angry Katarina is a tour de force. Amid the comedy in this show, she remains serious, demonstrating the realities of what her character endures. Katarina does not consent to her marriage to Petruchio, and in spite of the fact that she is his intellectual equal, she does not earn his respect, nor does she come to respect him. She only demurs to his wishes as the result of psychological manipulation and abuse by way of gas lighting, deprivation and starvation. As Katarina, Greensmith embodies the pain and helplessness of an abused woman. Every kiss between her and Bryan feels like a tiny rape. When she does begin to obey Petruchio's insane commands, she does so as a woman whose spirit has been broken, not as one who has grown to love her abusive husband.

Chelsea Burke's direction maintains the humor of this production while underscoring the damaging messages it contains. The show is well-paced, and Burke's staging helps tell the story as much as Shakespeare's words do. The pathos of this production is its greatest strength. One minute we are laughing along with these characters and the next we are profoundly uncomfortable, watching as these women struggle to gain basic human respect and autonomy.

This is the version of "The Taming of the Shrew" I've always wanted. It's a timely, smart, entertaining and thought-provoking showcase of incredible female talent.

Quill Theatre's "The Taming of the Shrew" runs until Aug. 4 at Agecroft Hall. Tickets cost $30. quilltheatre.org.