If art is a crime, Chuck Scalin is on the case. 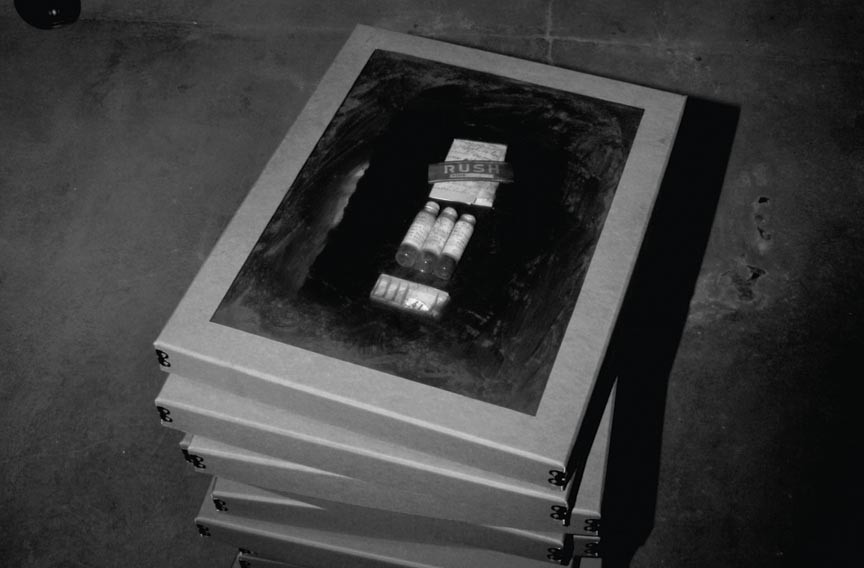 Scalin may have retired from Virginia Commonwealth University as the assistant chairman of the communication arts and design department eight years ago. But since then, his work has taken him from collage and assemblage to photography, glass and clay.

“I love the challenge of exploring new mediums I haven’t worked in before,” says Scalin, who’s been a creative force in Richmond for more than 40 years. “I take what I’ve learned in one medium and bring it to the current medium.”

To celebrate his 25th solo show, opening March 2 at Ghostprint Gallery, Scalin set out to create a concept that was new to him. Looking for a direction he hadn’t pursued, he wanted to create a show that had a story line attached. “This was something that I hadn’t yet explored for past shows,” he says.

While in Paris last year, Scalin took a series of very dark photographs with a somewhat mysterious quality. Shot in the basement of the Palais de Tokyo Museum, which was about to undergo renovation, he realized that there weren’t enough images in the series to fill a gallery.

Knowing that he needed to come up with additional work to fill the space, he also saw the challenges of ensuring that whatever he created be compatible with the photos he was planning to exhibit. It was a combination of his interest in pop culture and viewing many of the police procedural series such as “CSI,” “Law and Order” and “Unsolved Mysteries,” which helped him develop a narrative for the show — one that would complement the photos with additional work he planned to produce.

Using his background as a collage and assemblage artist, he began to put together a series of 15 works using three-dimensional vintage objects, photos and text gleaned from his personal collections, and placed them in storage boxes. With these things in mind, a story as well as the show’s title, “Body of Evidence,” established themselves.

“The photography portion of the show perhaps gives the viewer an ambience for possible unsolved mystery locations,” he says. “They are invited to examine a number of recently discovered, long-forgotten boxes containing evidence of unsolved mysteries.”

Scalin throws down a challenge to everyone who sees the show: “Perhaps the viewer will be able to uncover the meaning hidden in these enigmatic clues and unlock their dark puzzles.”