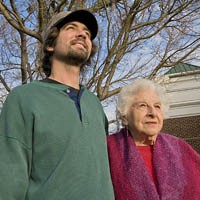 It was a warm June night more than 80 years ago when Ashland Police Sgt. Harry Valentine Smeeman made his final rounds. The next morning, June 30, his body was discovered in an alley — just a block from the coffee shop now owned by his great-great-grandson, Bart Shaw.

Shaw hopes officials will name the Ashland police station on England Street in the heart of town in honor of his ancestor. The building's probably a bit closer to where some local true-crime buffs figure Smeeman was initially gunned down eight decades ago.

Shaw, an Ashland fixture after years working at Ashland Coffee and Tea, is dissatisfied that his ancestor's ultimate sacrifice for the town is commemorated only by a somewhat scrubby tree and a plaque in front of the station.

“If you didn't know it — or unless you stub your toe on that little plaque — you wouldn't know anything about it,” says Shaw, who opened his own coffee shop, the Station CafAc, next to the Amtrak train station in November.

“I figured now it was time to readdress it — and it's a different town now,” Shaw says, referring to what may be the only certain fact in the case: The preponderance of evidence leads to the conclusion that Smeeman's murderers were known not only to him, but also by many townspeople.

Those who went unpunished were friends, neighbors, people who shared church pews in this sleepy town that 80 years ago more resembled the Wild West than a quaint suburb. Today, the murderers' descendants may well continue to share the pew with Smeeman's.

“I'm not for naming buildings after people,” says Martin, whose words carry the weight of his years as Ashland's police chief, with a law-and-order reputation rivaling Smeeman's. Martin says he's “pretty much solved” the case at the request of Smeeman's only surviving daughter, 88-year-old Mildred “Auntie” Davis. He refuses to name names, other than to say the murderers are long dead. Smeeman's case remains officially unsolved.

Shaw says Davis, his great aunt, is nearing the end of her life and deserves closure in the case. “It would be nice for her to have that last honor,” Shaw says.