"The Secret In Their Eyes" thrills until it thrills too much. 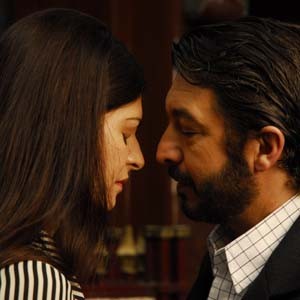 A man can change his location, his job, his appearance — just about anything, a character opines in “The Secret in Their Eyes.” But he can't change what he desires. That which we desire, we always come back to. True or not in real life, it's the currency of “The Secret in Their Eyes,” a mystery-thriller from Argentina that won the Best Foreign Language Film Oscar in March — beating “A Prophet” and “The White Ribbon” — about a man who desires to unmake the past.

The movie is immersed in such longing, mostly by Benjamin Esposito (Ricardo Darin), a retired government prosecutor in Buenos Aires attempting to wring a novel out of his memories. Benjamin is obsessed with a case he never solved, the rape and murder of a young woman and the killer who got away. Wrapped up in all this is his obsession with the woman he loved but never won, Irene Hastings (Soledad Villamil), and the feeling that he's wasted his life.

The director is Juan JosAc Campanella, who helped Eduardo Sacheri adapt the material from his novel “The Question in Their Eyes.” Presumably audiences respond better to the promise of secrets than questions, but the original title is the more apt, denoting characters who must grapple with uncertainties. If Campanella's name isn't familiar to you, his resume probably is. The director is best known for his American work, on well-known TV shows such as “House” and two different “Law and Order” series. The experience working in episodic television is telling in “Secret,” a rap sheet of heroes and heroines, villains and victims, whose many twists and turns unspool like the condensed version of a taut made-for-TV miniseries.

You can tell Campanella has worked in television just by the way the movie builds from scene to scene with an expert structure that gracefully moves between Benjamin's past and present. The makeup might be a little rough at times but the immersion in these two worlds is so complete you never fuss over the details. Nor does the movie lean on action or fancy camera work. There are a couple of flourishes of virtuosity, including a chase sequence at a soccer match, but Campanella relies mostly on dialogue and his actors' ability to hold our attention.

The flip side is that there's not much in the way of memorable images, but that doesn't make “Secret” dull. On the contrary, it's a multifaceted film that's difficult to pigeonhole. The movie is surprisingly humorous for a serious-minded thriller, even as that description fails to summarize the tensions at play. It's as if Campanella wanted to squeeze every emotion available from a drama into this one, succeeding on many levels.

“Secret” wants to say something as well as entertain, and mostly it succeeds, conveying some of the tougher aspects of life's futile struggle against time and injustice. For those interested in history, the movie's extended flashbacks take place in 1974, on the eve of some of the country's most tumultuous and ugly years. Mostly these impulses combine to be effectively moving. When Morales (Pablo Rago), the forlorn husband of the murder victim, warns Benjamin to forget about the case when he comes calling 25 years later, he neatly encapsulates the film's mournful perspective on regret. “You'll end up with a thousand pasts,” he warns after we've looked into some of those possible pasts, “and no future.”

“Secret” is so ambitious it's almost inevitable that its impulses sometimes collide into something not quite Oscar-worthy. There are a couple of stock characters, and the main villain, an amoral, slithering reptile (Javier Godino) induces plenty of revulsion but provides little in the way of understanding.

There's a lot of movie here. Maybe a little too much. Its unsolved crimes and unrequited love, detective work and rumination — all hopscotching effortlessly through a quarter-century of plot — can leave you breathless. And though it's 127 minutes long, you'll want more up until the last, unfortunately nutty 10-20 minutes or so, when you'll want a little less.

The only thing missing from “Secret” to make it the highest-calorie melodrama on the screen is a courtroom battle. It has everything else. This is the movie equivalent of a page turner. Just don't be surprised if the occasional page and final chapter leaves something to be desired. (R) 127 min. ***