Along with 57 congregations in other states, Temple Beth-El advocates for undocumented immigrants as nonprofits ready lobbying efforts.

Scott Elmquist Imad Damaj of the Islamic Center of Virginia bows his head during Witness and Lament, an interfaith vigil Sunday in support of asylum seekers and immigrants at Temple Beth-El.

On a recent trip to El Paso, Texas, Jennifer Rueben purchased $2,000 worth of $50 gift cards at a Walmart. The cantor from Norfolk donated them to a nearby shelter that provides support and services to newly arrived immigrant families. She wanted to let them know she was glad they were here. Four days later, in that same Walmart, a gunman with an AK-47-style rifle opened fire and killed 22 people.

The suspected shooter admitted to driving 10 hours to target Mexicans. National news outlets called it the deadliest attack against the Latinx community in recent U.S. history.

"I can barely breathe when I think of the possibility that some of those families might have walked into that massacre as a result of that gift," Rueben says from the steps of Temple Beth-El on the evening of Aug. 11. "The crisis of gun violence and hatred toward immigrants collided at that El Paso Walmart."

Rueben, one of about a dozen speakers, addresses the people congregated dressed in a sea of black to mourn Tisha B'av, the day that marks the destruction of Jerusalem and the consequent exile of Jewish people. The event, Witness and Lament: Solidarity Tisha B'av, focuses on a call to action against current immigration policies, abuse within detention centers and mass deportation.

Nearly 60 Jewish congregations across the country are holding similar events. Rabbi Michael Knopf of Temple Beth-El, who advocates for human rights inside and outside the synagogue, feels each event's goal is making sure history doesn't repeat itself.

"Jews know what it's like to be refugees and asylum seekers and migrants … what's happening in this country right now," Knopf pauses briefly before referring to the El Paso massacre and recent immigration raids in Mississippi. "Our recent history is in the Holocaust, and there's just very unsettling parallels between what's happening now and what happened then."

Knopf says holding the event at the temple serves as an expression of "tikkun olam," a Jewish value that means to repair the world through kindness. Representatives from multiple denominations are in attendance, such as the Virginia Interfaith Center for Public Policy's communications director* Roberta Oster. She kneels on the steps, iPhone in hand to record speeches delivered by clergy and the daughter of the 2015 Charleston, South Carolina, church shooting.

After two decades as a television news producer in New York and covering 9/11, Oster says she could no longer solely observe and report. She needed to "walk the walk." In 2002, she left full-time journalism and became an activist.

"I think it's worse now," she says of the isolation of ethnic groups in the U.S. "I imagine what it would be like to have my children in cages with no food and no water and toilet. … For me, it's ethical and it's policy focused. We can't just talk about it."

Today, she's proud to be part of an organization that is faith-based and pushing legislation. During the next session of the General Assembly, the Virginia Interfaith Center plans to advocate for driving privileges for undocumented immigrants as well as in-state tuition for Virginians who meet residency requirements. 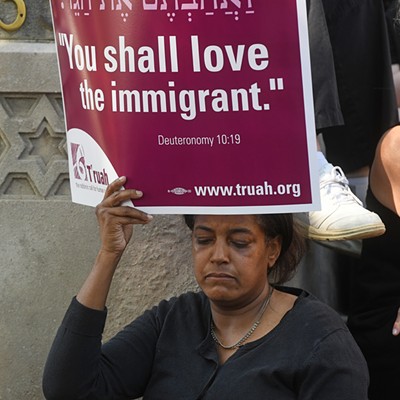 Yanet Limon-Amado, a Deferred Action for Childhood Arrivals recipient and senior at Virginia Commonwealth University, notes that fear of family separation doesn't only exist at the border — it can happen anywhere. She says protecting the undocumented community at the local and state levels and demanding local officials not cooperate with Immigration and Customs Enforcement is an important step.

"Sitting quiet is a privilege — the privilege of realizing that you won't get targeted by ICE because of brown skin like mine," she says. "We are being torn apart and we cannot wait until the next massive raid happens here in Virginia."

In the back, a wide-brimmed hat belonging to Holocaust survivor and co-founder of the Holocaust Museum, Jay Ipson, stands out in the crowd. After the vigil, a crowd immediately surrounds him, with speakers congratulating him on his 60th anniversary with his wife.

"The balloons haven't even deflated," he jokes, before echoing Limon-Amado's statements. "Everybody here says they want to help. Who does? Don't speak, do it."

This sentiment motivates Knopf to push forward. As a member of the Central Virginia Sanctuary Network, a group that advocates for the protection of undocumented immigrants, he encourages his congregation to get involved beyond protesting. Actions can include voting and lobbying for national policy, volunteering with local organizations and donating to immigrant bail funds, which provide monetary resources to help undocumented immigrants post bail, pay court fees and decrease the risk of deportation.

When he looks toward the future, it's not lost on Knopf that his young children will one day have questions.

"They're going to ask me, 'What did you do when they were locking kids in cages?' and I'm going to look them in the eye and answer them." S

*A previous version of this story incorrectly identified Roberta Oster as the executive director.