Leave your cellphone existence behind for a meditative journey at VMFA. 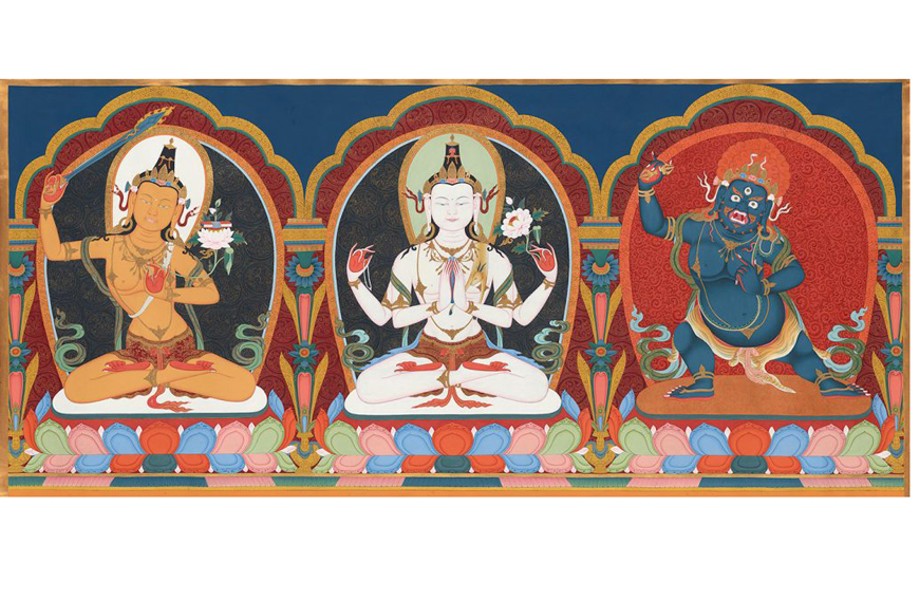 "The Three Protectors of Tibet" by Tsherin Sherpa

Lama Chodron Linda Jordan, a Richmond native who has been a Buddhist for nearly four decades and a lama, or self-described "teacher-minister-priest," since 2011, describes Tibetan Buddhist art as part of the "full spectrum" of the experience, meant to reflect the nature and variety of our own minds.

"Buddhism is all about waking up to the nature of our mind," she says. "And seeing it reflect[ed] in art is one of the methods for waking us up."

This kind of spiritual experience is what the exhibition "Awaken: a Tibetan Buddhist Journey Toward Enlightenment," hopes to offer guests at the Virginia Museum of Fine Arts, asking visitors to "power down, unplug, and join a voyage into the visionary art of Tibetan Buddhism." During the exhibition, Jordan and her group, Kagyu Shenpen Tharchin Tibetan Buddhist Sangha, will give a chanting performance. Also, monks from Drepung Loseling Monastery, a Buddhist temple in Atlanta will construct and deconstruct a mandala out of colored grains of sand for visitors.

Nearly 100 examples of Himalayan Tibetan art forms, from the ninth century to the present will be on view for the exhibition, which organizers have been planning since 2011 and which will take guests through ten spaces that correspond to the different phases of a journey toward Buddhist enlightenment. Most of the art hails from the museum and the Asian Art Museum in San Francisco, which house two of the largest collections of Tibetan art in the country.

Buddhism's roots harken to Siddharth Gautama, the historical Buddha, who was born in present-day Nepal in the fifth century B.C. After his death, his teachings spread and branched off into various sects including Vajrayana, which was cultivated by Tibetan religious teachers about a millennium ago. Vajrayana allows its followers to achieve enlightenment through meditation aided by art forms.

The E. Rhodes and Leona B. Carpenter curator of South Asian and Islamic Art, John Henry Rice, who co-curated the exhibition with the associate curator of Himalayan art, Jeffrey Durham, of the Asian Art Museum, where the exhibition travels in 2020, explains that the core collection at the Virginia museum includes several important Tibetan paintings dating to 1968. That small group blossomed under the curatorial vision of Rice's predecessor, the late Joe Dye, who began to cultivate major gifts and purchases from private collectors of Himalayan art in the 1980s and 1990s.

Since Rice joined the museum in 2008, the collection has grown to include more contemporary pieces, such as "Luxation 1" (2016) by Nepalese artist Tsherin Sherpa, who has lived in Kathmandu, Nepal, since his father emigrated from Tibet following the Cultural Revolution. Historical works such as a 15th-century scroll painting or its contemporaneous "Vajrabhairava," a polychromed wood sculpture of the Lightning Terror deity, were originally intended to aid enlightenment. Even the recently made "Luxation 1" explores Buddhism and enlightenment through the distorted image of Buddhist deity, Mahakala.

Rice and Durham agree that the exhibition is particularly relevant for 21st-century audiences — and you'll realize it right away.

"We all find ourselves in a time trap," Durham explains. "We find ourselves running out of time, all the time. Never able to get enough of that very rare sustenance. The first thing we want to drop you into in this exhibition is that very experience which we think is a hallmark in this point of history… the cellphone age."

This cellphone age is constructed for visitors at the beginning of the exhibition by a barrage of sounds emitted from video and audio.

"The clamor of everyday experience is a soporific lulling us into spiritual sleep," Rice continues. "An impediment to our capacity to be in the moment and mindful of the deeper patterns within existence."

Throughout the exhibition, visitors will be aided in their journey towards enlightenment with a map in the form of a painted mandala — a symbol of the cosmos and a palace for a Buddhist deity — and guided by an image of a Tibetan lama, the same image depicted in the 15th century scroll painting on view.

"What is really fun in the exhibition," Rice says, "is that when the visitor encounters the painted mandala on the wall, he or she can pick up a printed version of it, folded up like a typical map, that can be carried through the journey's ensuing stages. … [As you enter each gallery] on the wall is a sort of 'you are here' reproductions of the same map, helping the visitor to stay oriented and track where they are in the metaphorical quest."