What would happen if Sherlock Holmes and Monty Python had a Broadway baby? 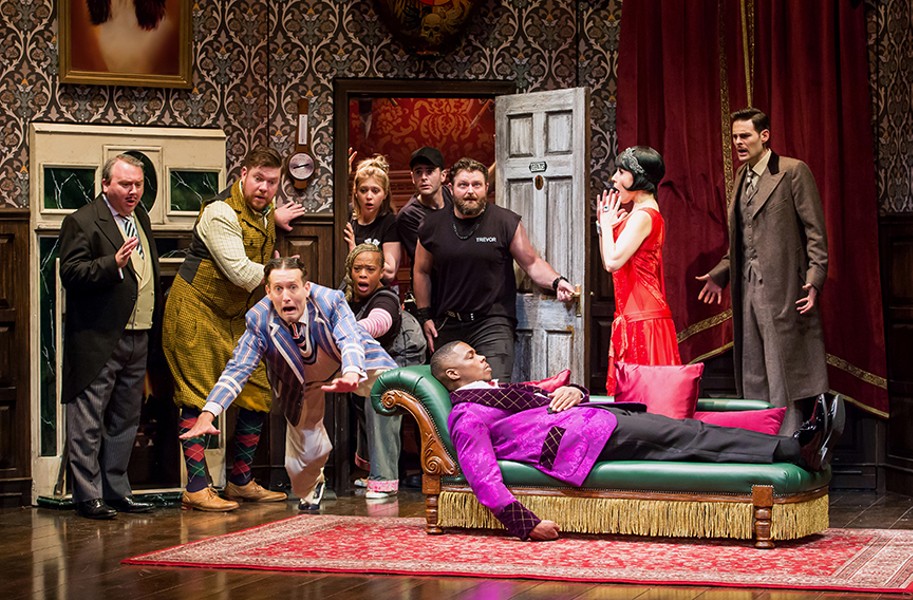 Jeremy Daniel Broadway in Richmond’s “The Play That Goes Wrong”

When it comes to self-evident titles, “The Play That Goes Wrong” rates alongside “Texas Chainsaw Massacre” in terms of accuracy.

The play, which ran for nearly two years on Broadway, follows a troupe of amateur actors as they attempt to stage a 1920s murder mystery akin to Agatha Christie’s “The Mousetrap.” Then, as the title suggests, things go horribly wrong during the play within the play.

Props fall from walls. Doors stick. Someone drinks turpentine, mistaking it for whiskey. An actor is knocked unconscious and must be replaced by a stagehand. And, by the end, virtually the entire set collapses around the actors.

If a sturdy – or, unsturdy, as the case may be – door-slamming farce appeals to you, you’re in luck. Next week, the Broadway tour of “The Play That Goes Wrong” comes to the Altria Theatre for a five-day run.

Reached by phone from New York last week as she finished up rehearsals before the tour, actress Jacqueline Jarrold describes the show as “what would happen if Sherlock Holmes and Monty Python had a riotous Broadway baby.”

“Everything that possibly could go wrong in the course of an evening at the theater does, and [the actors] press on through it all because it’s their opening night,” says Jarrold, who plays aspiring actress Sandra Wilkinson in the show. “It does not end well for them, and that’s basically the show.”

A New Jersey native, Jarrold made her Broadway debut in the 2016 production of “The Cherry Orchard” that starred Diane Lane and theater legend Joel Grey. Since then, she’s kept busy, performing in regional theater productions and serving as an understudy for the previous Broadway tour of “The Play That Goes Wrong.”

Of her character, Jarrold says Sandra isn’t exactly shy of the limelight, and sees the show as her ticket to stardom.

“In the Cornley University Drama Society, Sandra is the only woman, and I think she likes it that way. She loves to be loved,” she says. “She is sort of the leading lady of the drama society. Certainly the grande dame of her own mind.”

Asked about the hardest part about performing in a show that’s something like a middlebrow version of Michael Frayn’s “Noises Off,” Jarrold says it’s the broad physicality required by the script.

“It is very physical. There are a lot of stunts, a lot of pratfalls, a lot of fighting,” she says.
“It’s really exhausting. I’ve had to stay in really good shape to avoid hurting myself or anybody else for that matter. That’s definitely the toughest part.”

As for why people should see the show, Jarrold says the audience laughs so hard throughout the evening that it’s nearly like the score for a musical.

“It’s a hysterical, escapist two hours, and who doesn’t want that,” she says. “I think everybody needs a laugh right now, and it is nothing but a raucous, riotous, fun-for-the-whole-family good time.”