With a few changes, Carytown has the opportunity to have the best of both worlds — urban chic and broad appeal. 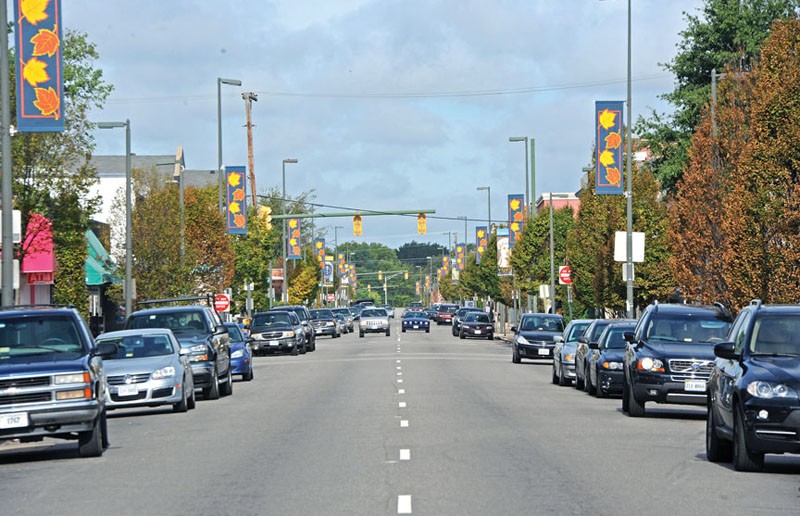 Recently the city built curb extensions at some of Carytown’s intersections. Although mostly cosmetic — plants and flowers — the effort is a sign, perhaps, that the city’s premier retail destination actually is growing up. But it’s time to take Carytown even further. Here’s how:

1. Bring up the anchors. Carytown’s gateway is flanked by extremely large grocery anchors, each with its own visually jarring parking lot. The city should require any future retailers to orient buildings toward the street with parking in the rear. Many cities are being served by large-scale retail, including supermarkets, that generate large volumes of customers without destroying the streetscape.

2. It’s Carytown, not a strip mall. While unique compared to its suburban counterparts, Carytown still suffers from a lack of what could be considered town amenities. There’s a dearth of strong civic institutions and cultural destinations. Carytown primarily is a retail street with few residents or offices above shops. Increasing the number of floors for buildings, which mostly have a two-story presence, would create a more attractive street wall. This would foster a strong sense of enclosure, akin to the great streets in Charlottesville, Burlington, Vt., and Frederick, Md.

3. Feed the pigeons. The parking lot in front of Cary Court, while nostalgic, is a serious disruption to the streetscape and an ingress-egress nightmare. Consider that the most desirable urban destinations in the world have terrible parking. People don’t flock to Paris, or smaller cities such as Asheville, N.C., because they heard from friends, “Hey, you gotta go to this place, it has great parking!” Cary Court could be transformed into a beautiful public gathering space, a node for serious people watching. A new Cary commons could be fitted with movable chairs and double as a space for outdoor concerts and ice skating, including a summer water feature with intermitted geysers for kids, similar to Stony Point Fashion Park. Cary Court could attract more restaurants with outdoor dining, filling the space with people at all hours of the day and night.

4. Free parking. While not a prerequisite for success, Carytown should consider expanding its parking decks from only two to perhaps four.

5. Welcome home. While Carytown is flanked by very desirable neighborhoods, it lacks a 24-hour presence of people. The absence of Carytown residents causes the street to go into cardiac arrest every day at around 6 p.m. Although some restaurants thrive on Fridays and Saturdays, the street is fairly catatonic most evenings. Apartments with balconies would keep eyes on the street while adding more regular customers. I’m not suggesting 25-story buildings. At three to five stories, the street-width-to-building height is closer to the “golden mean,” a ratio that throughout history has made streets and boulevards feel comfortable.

6. Admit we like to shop. There’s an utterly absurd notion that retail chains kill downtowns. Quite the contrary: A common theme to all successful urban revitalization models is the infusion of highly desirable anchor stores that draw the largest market possible. My favorite cities have boutiques and restaurants that live harmoniously among basic stores that the market finds convenient. Besides, several chain stores already exist in Carytown. While it may have initially thrived on its reputation for being different from the mall, it hasn’t progressed into a greater place for that very same reason.

Carytown reached market saturation some time ago and has not progressed. Some people may like it that way. But many, such as those businesses that have gone under, would have preferred more customers. Carytown has the opportunity to have the best of both worlds — urban chic and broad appeal.

7. Be our guest. Carytown doesn’t have what most great towns possess — a hotel. Only by creating places for tourists to feel comfortable while being able to access their vacation needs on foot can a street become a destination.

9. Pedestrians rule. In the 1960s there were several failed attempts by cities to supplant streets with outdoor pedestrian malls in a desperate attempt to compete with the burgeoning suburbs. By the 1970s it was clear that traditional, central business districts couldn’t compete with the new, Euclidean shopping centers that were awash with free parking, expressway access and overall bourgeois patina. When climate-controlled malls replaced outdoor malls, cities such as Richmond tried to compete by building ill-conceived indoor malls downtown — essentially removing all remaining life from the public realm.

That was then. Cities have discovered that pedestrian streets provide something that the suburbs do not: unfamiliarity. The trend of the suburban, open-air shopping mall is no random experiment. It’s intended to replicate successful downtown malls such as Boulder, Colo.’s Pearl Street, Denver’s 16th Street, Miami’s Lincoln Road and New York’s Broadway.

Carytown can capitalize on this trend and not allow the Short Pumps of the region to siphon away more revenue from the city. Restaurants could double the number of tables they serve. The city could provide street furniture and outdoor event facilities for more frequent, impromptu performances. Space finally would be available for a tree canopy to develop and provide, for the first time, actual shade in Carytown, allowing people to linger in the often oppressively hot summer months.

10. Make it alfresco! Great outdoor dining environments have given cities an edge over the suburbs. Eating alfresco among large groups taps into our primitive, behavioral sensibilities about security and belonging. More simply, people find enjoyment dining in a social atmosphere where sights, sounds and smells often enhance the dining experience. To see and be seen, people watching, is a critical element of most successful pedestrian streets. Extend the curbs in several key locations allowing restaurants to put cafe tables and umbrellas just outside of restaurants. If Carytown does nothing else, it should begin to make accommodations for many more people to experience alfresco dining. S

Jonathan W. Brown is an urban planner specializing in public-realm design. He lives in the Museum District.