A creative class convenes with 19 businesses and a matrix of like minds. 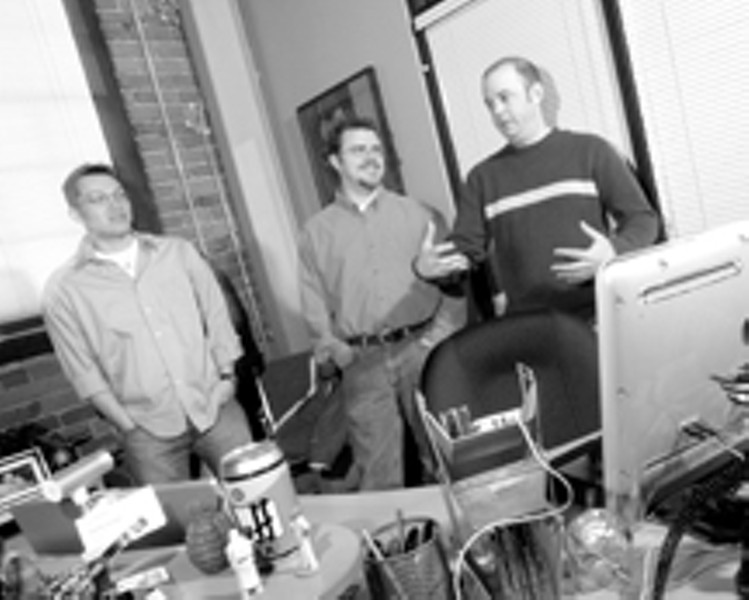 Roundtable is one of the players in what may be a new concept for Richmond. It’s called the Superior Production Exchange, and it comprises 19 independent but related businesses that share an address in Shockoe Bottom.

“It’s definitely a new model for Richmond,” says Dave Clemans, a media director for the Martin Agency. “The big benefit isn’t the affordability — we’re going to New York and overseas.” But knowing it can be done “right around the corner” increasingly could mean fewer trips to such places as Los Angeles “It’s one-stop shopping,” he says.

The offices are stylized and sharp; each one is distinct with boldly painted walls and chic interiors. A central high-ceilinged atrium connects them. But the most important aspect of the operation is how it functions — an atmosphere of collaboration, convergence and convenience.

If the arrangement works, its participants say, it could do for Richmond’s media production industry what the Martin Agency did for advertising. And, in an economy rebounding from a recession that two years ago put the local office of stalwart Henninger Media Services out of business, it’s a seemingly smart strategy for small enterprises in a high-tech, highly competitive market to unite.

Before talk of a riverside stadium, cinematographer Bunt Young envisioned his field of dreams in Shockoe Bottom amid 36,000 square feet of converted warehouse space. It is here, at the Superior Building at 19th and East Franklin streets, that Young and Kristen O’Connor of Rainmaker Studios have worked for more than a year — ever since Henniger vacated the same substantial space — to handpick what Young says is a winning roster of Richmond’s burgeoning creative class.

In such larger markets as Los Angeles and New York, these alliances are called cooperatives, Young says. The Superior concept is more that of niche entrepreneurs coming together to collaborate, when they can, without sacrificing autonomy. They share a philosophy and, Young says, a mission: to attract, keep and profit from creative opportunity within an underused but significant local production industry.

“It’s all about promoting the talent in this building and attracting a high level of production in the city,” Young says. “Richmond is a small, unique market. There is a lot of talent here that’s not been tapped largely because it hasn’t been organized.” The Superior Production Exchange, he says, will provide a collective focus.

The businesses are small — mostly two- and three-person boutiques that specialize in production-related areas such as imaging, editing, recording, casting, animation and entertainment law. For the most part, each serves a different part of the media production process. The thought is that each entity can benefit from the other through shared ideas, resources and, especially, clients. O’Malley, for instance, has enlisted Roundtable for branding his Cardio Coach product, Impact Media for promoting its American Family connection, Bunt Young Cinematography for video work and Rainmaker Studios for recording new audio.

For O’Malley, selecting the four small businesses instead of one larger one was a tough choice. He had considered signing with a single production company in Florida or outsourcing the work to India, where he says he could get it done for one-tenth of the cost. Instead, he says the “personal customer service” of Superior Production Exchange won him over. Plus, Richmond was more convenient to his Norfolk-based business.

Recently, the Martin Agency’s Clemens worked with animation and visual effects artists Dave Gau and Shannon Honaker to produce a commercial for Richmond Music Center. Gau and Honaker are partners in ShaveFX, a participant in the Superior project.

Gau and Honaker are happy to show off the commercial spot to Butler, who has crossed the hall from his office for a visit. Honaker plays it on his plasma computer screen. In it, a devil sets fire to an aspiring musician who forsakes guitar lessons for chicks, fame and fortune.

Despite the appearance of a guy flailing as if ablaze, there were no flames in the studio, they explain. Instead, they built a 3-D model and explored the best way to film it to make it look real. “It was No. 1 on adcritic.com for a while,” Honaker says. Clemans wrote and directed the commercial, but needed someone to produce it, Gau adds. The ShaveFX owners hope it will help get the word out about the Superior Production Exchange. “If someone has a ‘Finding Nemo’ project we could do it,” Gau says giddily.

Indeed, the excitement about the place appears contagious. “There’s a vibe about Richmond,” says Scott Hale of the ultracontemporary Rainmaker Studios that, with four years in business, is the building’s oldest tenant. “Technically you don’t have to go to New York, L.A. or Chicago anymore.”

Two weeks ago, the group held a reception to introduce itself to the community and city boosters. Invitations and coasters were printed bearing the Superior Production Exchange logo. It’s reminiscent of a Hollywood marquee. More events will come, Young says, as it strengthens its hold, with room for a few more “selective” players.

For now, optimism and a sense of humor prevail. Superior member Charles Tinsely, who with his longtime friend and business partner Woody Sherman knows the caveat: “There is this saying that if you want to make a million dollars in the video production business, you better start with 10 million.” S