Union Presbyterian Seminary The proposed plans for a large housing complex near the site of the McGuire Cottage on the Union Seminary Campus.

The McGuire Cottage has seen a lot for the more than 175 years it has anchored a 14-acre, mostly open tract of land facing the 3200 block of Brook Road.

It’s hard to know when it was built, but for certain it witnessed Confederate and Union soldiers tramping up and down Brook Road. And for many years in the 19th century it served as a residence of the Dr. Hunter H. McGuire family.

McGuire was one of Virginia’s most essential and beloved physicians. His bronze image graces Capitol Square, and the U.S. Veteran’s Hospital in South Richmond bears his name.

In the 1960s, the national Poor People’s March made its way past the cottage en route to Washington. Participants rested for hospitality at Union Presbyterian Seminary, an oasis of welcome and hope when much of the region was mired in hurtful racism.

But for most of its existence, the Italianate and picturesque frame and stucco house served as housing for the seminary’s students. The ministerial training school has owned the dwelling and surrounding Westwood Tract since the 1920s. Seminary-owned tennis courts, playing fields and a jogging course nearby have generously been available to the neighborhood.

But on the evening of Monday, March 6, more than 150 residents from nearby Sherwood, Ginter and Laburnum parks, and other preservation-minded people crammed into the seminary’s Lake Chapel, an architecturally glorious space, to discuss, among other things, the future of the precious old cottage.

More specifically, they came to lend an ear — and give four hours’ worth of an earful — to officials from the U.S. Department of Housing and Urban Development about a 301-unit apartment complex that the seminary proposes to build near the cottage at the southwest intersection of Brook Road and Westwood Avenue.

The seminary maintains, and no one questions the aim, that it must provide housing to fit a range of students’ needs in the near future. Residential use is not the issue. There has always been housing on the Westwood tract with various units placed here and there. But they’ve melded with the scale and architectural diversity of the neighborhood.

What many laypeople can’t understand is why so many units are needed. Certainly real estate development isn’t in the school’s mission at the environmental and aesthetic expense of the very neighborhood that invited the school to locate there in the first place more than a century ago.

Despite its legal zoning right to build intensely on the site, this sort of project wouldn’t have been what the 19th-century benefactor Lewis Ginter and his associates had in mind when they invited the seminary to serve as the unimpeachable, institutional anchor for their suburb. The original campus is a jewel and generations of administrations have been savvy and imaginative in the stewardship and adaptive reuse of the Tudor revival buildings.

What neighbors and those who know and protect things that make our city unique contend is that the proposed apartment complex is architecturally thin. It is subpar for the campus, surrounding neighborhoods and the historic residential stock.

This pivot to planning, environmental and architectural mediocrity is what has so many people baffled, hurt, disappointed and now sadly, miffed.

The time has come for the parties that have a sincere stake in the outcomes to get on the same page. It isn’t rocket science. The seminary might engage with a local planner and architect who know the local cultural and legal ins and outs to devise a handsome new plan that considers neighbors’ concerns.

“Back to the drawing boards” is an oft-used and wise planning tradition that has long enhanced the outcomes of hundreds of business, corporate, college and religious institutional expansions. The combined brain power of those who packed into the seminary chapel two weeks ago should be welcomed and respected. There were dozens of other ways those people could have spent their Monday night, but they want to get this right.

The ball, of course, is in the seminary’s court. And based on how right it’s been on other architectural decisions since 1895, the school hopefully will do the right thing by listening, shifting gears and moving on together with the community it has long served. Let this just be just a bump on the road to getting things not just right, but the best they can be. 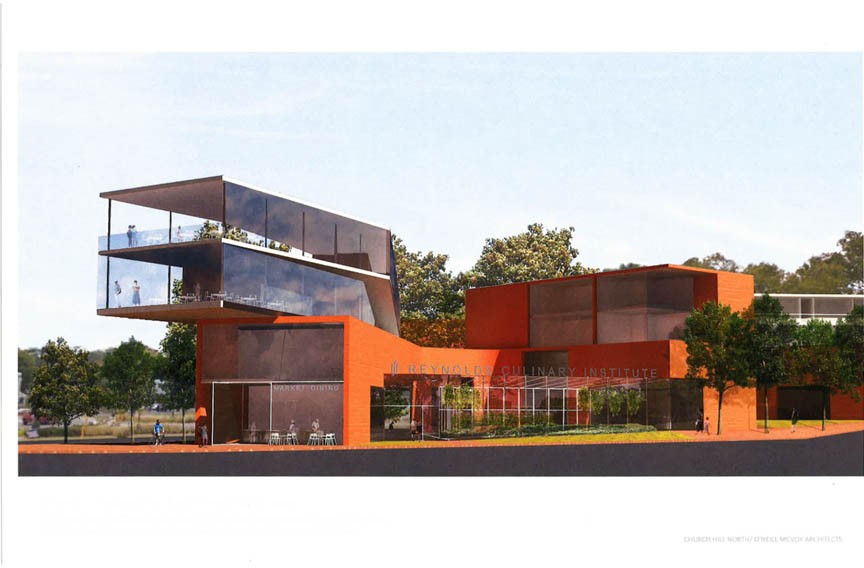 Three days after that public meeting in Lake Chapel, the focus was on architecture in another area of Richmond. In North Church Hill on Nine Mile Road, J. Sargeant Reynolds Community College unveiled plans for a new school of culinary arts that will be part of a larger makeover involving nutrition, health and grocery options in a more economically challenged part of town.

What made the announcement of the school so thrilling was the published rendering of the building that will house the culinary program. The building by O’Neill McVoy Architects of New York will fit its site like a glove while not overwhelming the neighborhood. In form, color, lightness and beauty it promises to deliver the power of excellent and innovative architecture to inspire and heal.

Come to think of it, isn’t that what the seminary trains its students to do? May the healing and inspiration also begin on the North Side. S