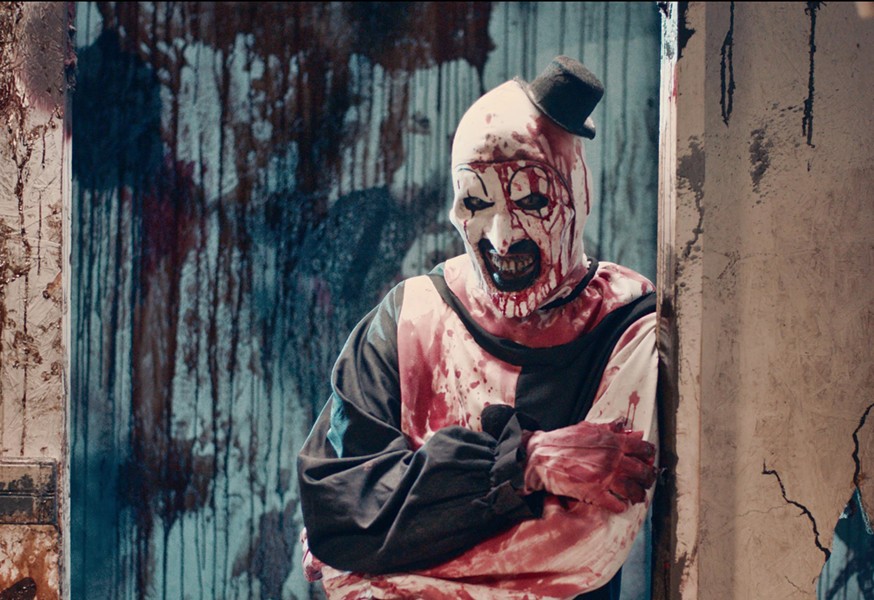 David Howard Thornton in "Terrifier 2," an "unpretentious, outrageous" work of trash which is ascending the box office charts with virtually no advertising.

The American horror film is in a timid place these days. With few exceptions, the genre currently splits into two strands: political fables as preachy as any Oscar bait you’re likely to encounter, and the usual onslaught of remakes, sequels, reboots, and whatever other word for “do it again” is currently in favor. The explanation for the latter is obvious: money. As for the former, the source may be more complicated.

I suspect that Donald Trump, Harvey Weinstein, and Jordan Peele collectively spurred horror movies to offer pat arguments about the dangers of racism, sexism, and the like, with recent low points being Nia DaCosta’s “Candyman” and Mariama Diallo’s “Master.” Peele’s “Get Out” was a lightning-in-a-bottle zeitgeist sensation in 2017, released amidst Trump’s political ascension and Weinstein’s downfall for committing elaborate, institutionally enabled sex crimes. Whatever your feelings for “Get Out,” which grows routine and cops out on its implications with an unforgivably flip ending, it still felt like an exorcism of demons recent and long-buried alike.

But platitudes often, and collectively, compromise the horror movie’s outlaw nature—its sense of accessing subterranean truths and challenging our preconceptions of ourselves. At its best, horror cinema is like punk rock: screaming at the calcified politeness of society. Art needs to be dangerous again, rather than serving as the PR arm for political factions.

Over the last few years, I’ve said this more than once: to regain its animal vigor, the American horror film needs to reject theme and go for raw outrage. “Theme,” the need to be about something that’s usually meant to better us as people, is a constriction of art that must constantly be resisted, which is quite difficult. Tension needs to be reestablished between audiences and horror filmmakers.

Damien Leone’s “Terrifier 2” is unpretentious, outrageous trash made by someone who couldn’t appear to care less about whether or not you see anything redemptive in his work. That’s freedom. As that glorious title suggests, “Terrifier 2” is a slasher film reduced to its elementals. Well, it is and it isn’t. Look closely and there’s “art” going on around the margins, but Leone doesn’t offer you a roadmap.

Art the Clown (David Howard Thornton) kills people, mostly attractive teenage girls. Narratively, that’s it. Leone doesn’t give Art an absurd mythology along the lines of a Jason Voorhees or a Freddy Krueger. There are fleeting references to previous massacres, which were not shown in the first “Terrifier” either, but those are to assert Art’s bona fides as an unstoppable killing machine and to impart a pervading impression of confusion and chaos. The girls are given no motivation or backstory either, except for vague gobblety-gook about a father’s legacy of madness that matters so little it doesn’t even rate as a red herring. Think of all the busy plot that a “Scream” sequel will ladle on in order to justify getting to what everyone paid to see: the killing. Leone doesn’t screw around.

The film’s first scene, in which Art hacks up a coroner after springing back to life in the aftermath of the first “Terrifier,” sets the tone and allows audiences to decide whether this enterprise is for them. Art chops the man to pieces over a matter of many minutes. Leone dwells on the action for so long that the grotesquerie becomes surreal, then comic, then surreal again. The blood and guts just keep spilling, and Leone stages the carnage with a relish that is very blunt, yet shockingly assured.

Leone’s editing is kinetic, inviting us to enjoy the violence, yet he doesn’t shortchange the pain of Art’s victims. This is a hint that there’s actually some art, carefully hidden, going on in something called “Terrifier 2.” The absurd clown murders are a ghastly joke and taken seriously at the same time, a juxtaposition that challenges the callousness of most slashers. A point of reference for Leone might be Amy Holden Jones’ “The Slumber Party Massacre,” a sleazy ‘80s slasher movie with a streak of feminist empathy and dry comedy.

Another sign of art is the way Leone stretches scenes out, allowing each sequence to act as a mini movie unto itself. At least one of these sequences is brilliant: a nightmare set in a studio producing a show for children that suggests “Pee-wee’s Playhouse” in an outer ring of hell. Children sing a song about a “Clown Café” while various atrocities unfurl, such as a child eating sugary cereal loaded with needles and barbed wire. The children sing about fast food killing you, while Art hangs about in the margins, eventually burning one of the singers alive. There’s satire here, if you want it, and it’s cutting: of the way we mold our children into addicts and consumers at an early stage with shows and toys and food. There’s also the unhinged, gleeful free-association of the images, which renders most Stephen King books bashful by comparison and occasionally comes within spitting distance of the films of shock poets like Miike Takashi. I’m betting this scene runs 15 minutes, and it has nothing on a literal level to do with the slim plot. Yet it would’ve been outrageous to cut this sequence, which is a masterpiece of modern surrealist horror.

"At its best, horror cinema is like punk rock: screaming at the calcified politeness of society. Art needs to be dangerous again, rather than serving as the PR arm for political factions." tweet this

Many scenes prompt you to wonder how in the hell Leone thought to include them in a slasher movie. Art, who suggests the Creeper of “Jeepers Creepers” as a rabid mime, spends quite a bit of time wordlessly taunting his victims. A sequence in which Art heckles one of the heroines in a costume shop, which probably runs 10 minutes, is scary and funny precisely because Leone stretches it out so long as to disorient our sense of horror movie timing, which is further thrown out of whack by Thornton’s unpredictable physicality. After a while, we can’t tell when the punchline’s coming. And when it does, we’ve come to respect the victim, and the killing stings even as it’s played for gutbucket vaudeville.

“Terrifier 2” runs 135 minutes, which is unheard of for a slasher movie, and this stretching of time recalls another genre director who makes bold, violent movies that challenge our sense of cinema needing to be good for us: S. Craig Zahler, of “Bone Tomahawk,” “Brawl in Cell Block 99,” and “Dragged Across Concrete.” Zahler will spend 5 minutes on a character eating an egg salad sandwich, mixing “arty” slow cinema tactics with scenes of carnage that are swift and disgusting. His characters repeatedly say offensive and funny things, seemingly existing in a random and godless society. Zahler’s films suggest a clearing of the pompous order of things, and “Terrifier 2” brings a similar blend of refinement and luridness to the modern slasher movie.

Even though parts of “Terrifier 2” suggest that Leone is an artist, his surprising formal confidence and resonant sense of humor do not entirely give us permission to rationalize the film’s sadism as something more than a carny freakshow. This is the movie’s supreme accomplishment. Leone doesn’t give you that intellectual out. “Terrifier 2” is unhinged rotgut. No wonder this breath of fresh air is ascending the box office chart despite virtually no marketing. You will continue to hear about it.

“Terrifier 2” is currently playing at Movieland.