Is the city’s incubator an economic engine? Or a cheap motel for businesses? 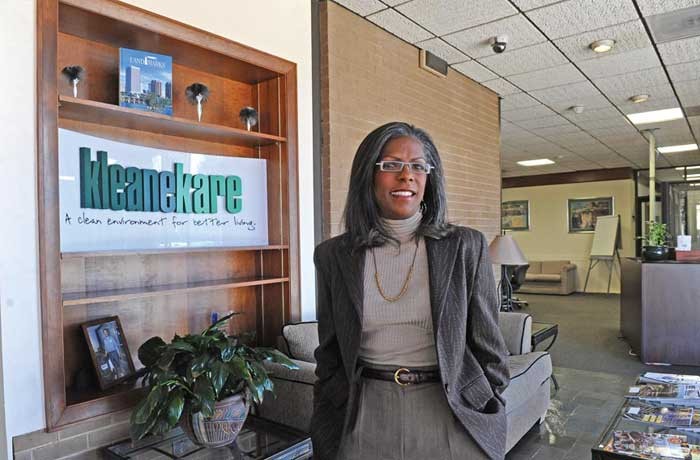 Sharon Dabney-Wooldridge ran her green-cleaning company, Kleane Kare, from any space she could find: friends' borrowed desks, the library, her house. She wanted a professional office, but couldn't afford anything fancy. So in 2003, she leased 300 square feet in the city's downtown business incubator.

"It kind of took me to the next level," Dabney-Wooldridge says. Within three years she occupied half of the sixth floor. That's when the building's manager told her, "Sharon, I think it's time for you to spread your wings." She moved into a 4,300-square-foot space in Manchester and today employs more than 100 people.

That's how the incubator is supposed to work. Small businesses hatch there, lose their baby fluff, sprout some pinfeathers and soar.

Well, some of them do. Other chicks realize that the incubator's a pleasanter place than the cold, market-rate world. So they decide to stay. And stay.

Since 2000, Richmond's Economic Development Authority has housed the incubator in an eight-story, $3.8-million building it owns at Fifth and Franklin streets. Its official name is the AdvanTech Maggie L. Walker Business and Technology Center. The building offers companies flexible, low-cost leases for furnished office space, with heat, electricity, janitorial services and other amenities included. The public authority subsidizes the building's costs — which amounted to $114,000 last fiscal year, on top of rents collected.

The incubator's mission is to give new companies with high growth potential a boost, helping them thrive and contribute to the Richmond economy. The concept works. Nationally, about 87 percent of companies that graduate from incubators remain in business after five years. A public entity that funds an incubator pays $1,100, on average, for each job created, according to the National Business Incubation Association.

But in Richmond, the authority doesn't track jobs that incubator tenants have created, or how long companies last after they leave. It doesn't require that tenants meet business goals, or even move out after a set time. And some companies have gotten quite comfortable in the nest. A review of leases by Style Weekly shows that out of 42 current tenants, 13 have been in the incubator for more than three years. Of those, seven have stayed longer than five years.

The largest — and longest — tenant is BranCore Technologies, an information-technology services company. BranCore moved into a 145-square-foot office in December 2001. Ten years later, it occupies the entire seventh floor. (BranCore President Glenn Davis did not return multiple calls from Style.)

Some newer tenants aren't fledgling businesses at all. They're satellite offices of companies based elsewhere, such as Charlottesville's Apex Wind Energy and CP&Y, a large, Dallas-based engineering company that's working on a contract at Richmond International Airport. Or they're long-established organizations, such as the 26-year-old Richmond Shakespeare theater company.

The building is 78-percent full, says the incubator's director of operations, Sharon Kerrick, not counting the eighth floor (which has been vacant for years). Three new tenants signed leases in January.

AdvanTech's allure is threefold. It's in a prime downtown location, has multiple office sizes to fit a variety of needs, and offers flexible leases. In the fall, Mary Dunne Stewart was searching for office space for Greater Richmond Fit4Kids, a young nonprofit that gives schools small grants to promote fitness and good nutrition.

Of the five or six spaces Stewart considered, all required a minimum three-year lease. "We have no idea what we'll look like in three years," Stewart says. Plus, she didn't want to waste the organization's money to buy furnishings. "So here, being able to find a six-month lease, and that it was all inclusive, was huge," she says of AdvanTech.

The incubator originally was a home for high-tech companies, but that plan popped along with the dot-com bubble. Since then, membership has been open to nearly anyone. Most tenants are professional-services outfits: accountants, financial advisers, IT providers, construction companies, consultants, home health-care providers and family counselors. There's also a talent agency and a driving school.

Incubators elsewhere are choosier. To get into the Fairfax Innovation Center, for example, a business must secure financing, have a written business plan that involves an innovative product or service, and demonstrate high potential for growth. Once you're in, the incubator provides free business counseling, weekly seminars and mentoring opportunities. Tenant companies are expected to hit their goals in no more than two years, and then move on.

The Economic Development Authority's board, which is appointed by City Council, wants to make Richmond's incubator more like this. Zarina Fazaldin, the incubator committee's new chairwoman, says the board plans to appoint a group of local business leaders, professors and city representatives to help select the right tenants and develop their business plans. Every three months, this group would review tenants' achievements, strengths and weaknesses. The goal would be to graduate in 18 to 24 months.

What of the long-nesting tenants? "Some of them have been with us a little bit longer than they should be," Fazaldin acknowledges. The authority hesitated to kick them out into a cold economic climate, she says, but will discuss what to do.

Dabney-Wooldridge, the successful incubator graduate, says AdvanTech should work with tenants "in their middle or latter years" to help them move on. After all, she notes, "It's not meant for you to stay there a long time." S