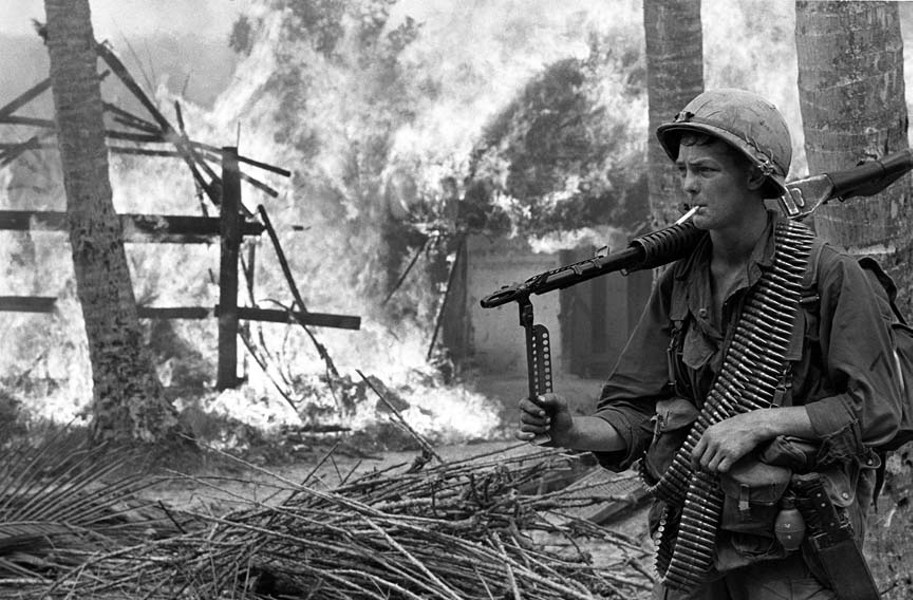 Shot by UR professor Robert Hodierne, “Private Woods” was photographed in 1967 in Vietnam but printed this year.

In 1965, Robert Hodierne saw his first concert, the Jefferson Airplane, at the Electric Theater in Chicago. By 1966, he was the youngest accredited journalist covering the Vietnam War.

A new show at the University of Richmond, “Robert Hodierne: Vietnam War Photographs,” chronicles his time spent photographing combat in every corner of the country, from the demilitarized zone to the Mekong Delta, from jungle-covered mountains to the rice paddies of the lowlands.

His interest in photography was sparked as a student at Grinnell College. “It was the second coolest thing you could be after a rock star,” Hodierne says from his office at UR, where he teaches journalism and serves as department chairman.

An article in Popular Photography about the shortage of war photographers caught Hodierne’s wandering eye. He was young and hungry enough — “I wanted to be rich and famous,” he says — to write to United Press International’s Saigon picture bureau chief, Dirck Halstead, for a job.

“He wrote and told me to drop by the Saigon office and we’d talk,” Hodierne recalls, chuckling. “I took that as a job offer.”

Using his senior year college savings for a one-way ticket — his first plane ride — he showed up in a shirt and tie with Halstead’s letter in hand wanting to talk. Halstead immediately sent him off with a reporter to cover a Buddhist uprising at a nearby pagoda, sealing his fate.

“Dirck was laboring under the misapprehension that I knew what I was doing,” Hodierne says. “But I found out riots are easy to photograph. They bought five of my photos that day.”

Along with a cadre of a dozen or so ambitious stringers, Hodierne began making a living photographing the war, thrilled that he was provided with all the film he could use. It turned out to be a bizarre existence for a small-town kid from the Midwest.

“It was the last good war to cover,” he says of Vietnam. “There were almost no restrictions on us, no advance clearance. We could walk chopper to chopper, get on, go take pictures and be home and showered to go out to dinner that night.”

After 14 months, he returned home and finished college, graduating in 1968 and enlisting in the Army the same year. Sent to Vietnam, he was assigned to the armed forces newspaper Stars and Stripes to write stories and take pictures. The position allowed him to live in a villa, wear civilian clothes and be treated like a civilian.

“We told it like it was,” he says. “We weren’t subject to any military censorship. Most of the time, I wasn’t scared. As long as I was looking at the war through the glass of a camera lens, I wasn’t afraid.” He returned home for the last time in 1970 with thousands of war photographs.

Fast forward to 2015, the 50th anniversary of the Vietnam War, and Hodierne is a documentary filmmaker and professor who, working with the university museums executive director, Richard Waller, agreed to co-curate the exhibit.

A concurrent film series, “Documenting the Vietnam War: Journalism, Scholarship and Film,” screens war movies such as “A Bright Shining Lie” and “Hanoi Hilton” and features speakers such as Peter Arnett and Joe Galloway. It runs Sept. 9 through Nov. 11.

Waller says the photos capture the history of the war, and through them viewers are able to experience the universality of that conflict.

“Robert photographed, close at hand, soldiers during engagement with the enemy and at other times during their tour of duty,” Waller says. “He caught fleeting moments in the fast-moving chaos of war with images of young soldiers during battle and at rest.”

For his part, Hodierne only hopes that people don’t get the wrong idea.

“I always worry that people think pictures like these glorify war,” Hodierne says. “I hope people don’t take that away. These photographs show young people thrown into impossible situations and surviving.” S

“Robert Hodierne: Vietnam War Photographs” opens Sept. 16 at 6 p.m. with a talk by Hodierne and a reception at UR’s Lora Robins Gallery of Design from Nature. The exhibit runs through Jan. 26. museums.richmond.edu.