In the wake of catastrophe, bus safety takes the spotlight. 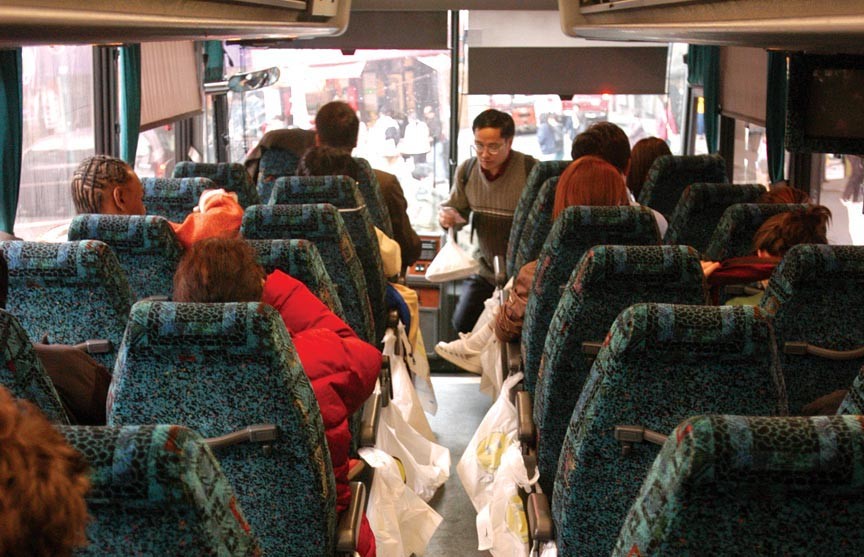 Noire Turton is watching the Apex bus her father has just boarded when a woman in a car pulls up beside her. "You're still taking the bus? After that accident?" she asks.

Turton tells her no, her father is, before turning her attention back to the motor coach idling in a parking lot off Parham Road. She says the last bus trip she took about two-and-a-half months ago was her last. "For me, the $25 to $50 isn't worth my life," Turton says, watching the short line of people still waiting to board.

Bus travel remains an overwhelmingly fatality-free method of travel for its passengers. Of the 750 million people who travel by motor coaches each year, about 19 passengers die, according to the U.S. Department of Transportation. But last week's crash on Interstate 95 in Caroline County, which resulted in the deaths of four people and sent 54 more to area hospitals, highlighted how much cheap fares can cost.

"If it sounds like it's too good of a deal, it probably is," says 1st Sgt. Ted Jones of the Virginia State Police's Motor Carrier Safety Unit. "Typically a carrier that can charge that minimal amount is probably cutting some corners, whether it be maintenance or training and required certification of their drivers."

Jones participated in the Federal Motor Carrier Safety Administration's two-week surprise inspection of more than 3,000 passenger carriers, which led to more than 442 buses or drivers being taken off the road nationwide.

Carriers licensed in Virginia are required to undergo yearly inspections, Jones says. Buses just passing through aren't subject to state inspection requirements, though they can still be pulled over and searched for federal violations.

Trooper Richard Weyant says that generally won't happen unless they're observed violating the law. Roadside inspections can endanger passengers and cause delays of at least an hour, he says: "It can present challenges. In order to inspect a bus we have to have room to do it."

Driver error or fatigue, more than mechanical malfunction, is more often cited as a primary factor in federal crash data, however. That type of error is also associated more often with charter buses — including so-called Chinatown buses — than other types, such as city transit vehicles, says Dan Blower, associate research scientist at the University of Michigan's Transportation Research Institute, which collects and analyzes bus-crash data.

"The bus drivers tend to have poorer previous driving histories than other bus operator types," Blower says. "One would suspect that crummy drivers tend to migrate to carriers that are less concerned about safety."

Blower recommends that travelers research their bus carrier's safety ratings before climbing aboard. "I bet every reputable carrier would want their passengers to look them up," he says.

That may be easier said than done. Some carriers seem to be listed with federal regulators under different names than they use to sell tickets, and state registration numbers aren't readily available on companies' websites or by phone.

Authorities are quick to emphasize the differences in bus travel — between cheap carriers, Greyhound, private charters and public, noncommercial transit.

As a point of comparison, GRTC buses are inspected daily by drivers. Mechanics perform preventative maintenance every 6,000 miles and the buses undergo annual state inspections. GRTC drivers can work a maximum of 13 hours per day, and they must have at least eight hours between shifts. "Seldom do operators work more than eight hours per day," spokeswoman Joan Straszewski says.

"Typically, city buses have a good maintenance schedule. I haven't had any experience with equipment failures on city buses leading to an accident," Jones of the state police says.

He expects that more "concentrated enforcement" of commercial motor coaches is on the horizon. While he awaits word from federal authorities, he says, state police will continue to make regular inspections.

As for Turton, she says the next time she and her daughter, Kendra, return to Brooklyn to visit family, she'll be driving. "My dad thinks the bus is great," she says. "For him, it's worth it. It's not for me." S