The work of Japanese-born fiber artist Kiyomi Iwata savors the unseen at the Visual Arts Center of Richmond. 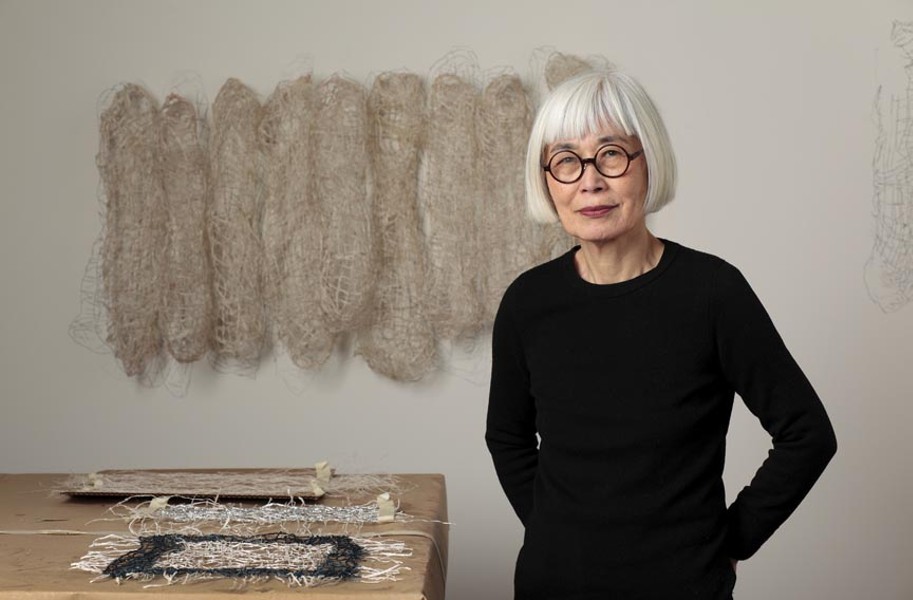 Artist Kiyomi Iwata stands in front of work from her new retrospective, “From Volume to Line,” currently running at the Visual Arts Center of Richmond.

At 74, Kiyomi Iwata shows no sign of fatigue. Petite and spry, she could physically be mistaken for a mix of architect I.M. Pei, a friend of hers, and artist Yayoi Kusama, minus the pink hair.

The two-decade retrospective, “Kiyomi Iwata: From Volume to Line,” runs through June 7 at the Visual Arts Center of Richmond.

Nearly all of her work, except for some of the most recent, such as this year’s “Thread,” is indebted to an underlying grid form. Notions of dislocation, movement, the dichotomy between East and West, and translocation permeate throughout. Process and the artist’s hand are other integral components for Iwata, who spends most days working in her studio at Plant Zero in Manchester.

“I like the idea of using my hands,” Iwata says. “It’s very satisfying to make something with my own hands. It’s very much a process.”

Born in Japan during World War II, Iwata moved to Richmond in 1964 and took batik classes at the Virginia Museum of Fine Arts studio school before leaving for New York in 1971. She and her husband returned in 2010.

Japanese aesthetics of beauty, a concept tied to the Japanese terms wabi, sabi and yugen, offer an underlying thread in her work. Iwata most directly uses yugen, or a mysterious beauty that exists on the fringes, at the edge of visibility.

“There is a quality of mystery to the works,” she says. “People project their own meaning. The idea is that you don’t know what’s inside.”

The Fold (1995-2014) series best exemplifies yugen. Using different types of metals and silk organza, Iwata folds the metal in furoshiki, a traditional Japanese way of wrapping a gift for transport. To some of these furoshiki objects, she applies gold leaf. Others have been prodigiously accented with individually embroidered french knots.

“I’m infatuated with French embroidery knots,” Iwata says, laughing. “I don’t know what it is, but I find them very satisfying.”

After she returned to Richmond, Iwata’s work drastically changed.

“It was hard moving back because there were so many disconnected relations with friends [from New York] and reconnections in Richmond, since we had lived here before,” she says. Instead of three-dimensional forms, her current work relies on lines and shadows to set up a tension between tactility and void.

She also has delved into new materials. On one of Iwata’s annual trips to Japan, a friend introduced her to kibiso and ogarami choshi, two waste products from silk production. Iwata recycles these once discarded materials, keeping them in their original coarse state, to highlight the green movement and comment on the evolution of the Japanese silk industry, a once thriving business now outsourced to China and India. Only two remaining silk suppliers, both funded by the Japanese government, remain.

Time and changing life cycles factor prominently throughout the exhibition. In the small work, “Fungus” (2015), Iwata ties together a bundle of ogarami choshi cylinders with a piece of wire. To the outside, she applies silver leaf, enhanced with silver spray paint.

“I like the idea of the change that happens through the oxidation,” she notes. “Unlike conservationists who want to preserve artwork, I like the idea that the work evolves, breaks down, and shows the passing of time. Something lost, something gained.”

It’s clear to see that the handcraft process is a type of healing for Iwata.

“I feel a peace about this work and a happiness,” she says, after talking about the newer investigations. “It is a good time to be in Richmond.” S