TheatreLab explores the exciting possibilities of its new home, the Basement. 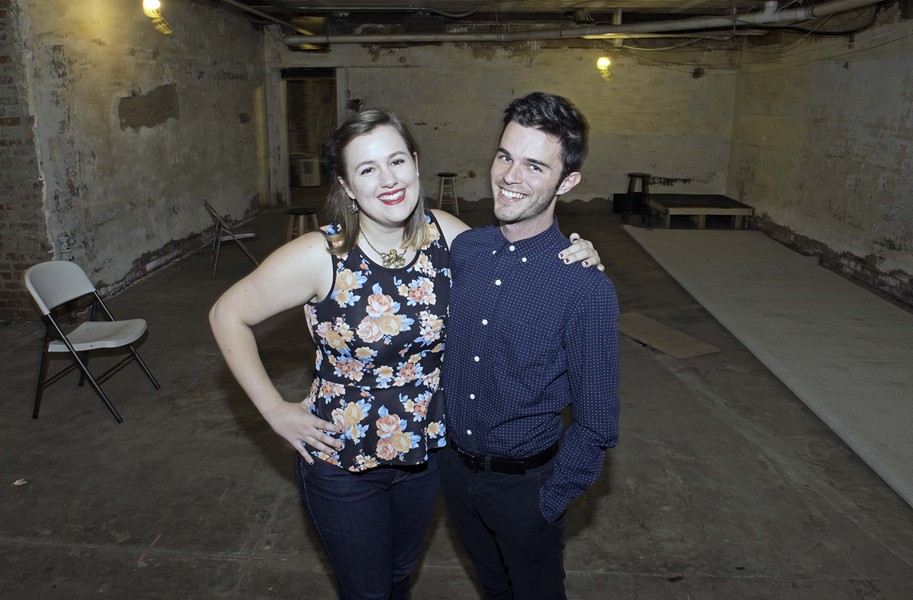 Nascent and nomadic, TheatreLab is a Richmond-based ensemble of young actors, directors and playwrights. Its artistic director, Deejay Gray, is always on the lookout. He searches for fresh scripts that will challenge audiences and scans the theatrical horizon for new talent. He monitors the region's 15 or so other theater companies to complement or amplify — or at least not compete with — whatever they're producing.

And then there's scouting for performance spaces. Ah, there's the rub.

"We had trouble finding venues," Gray says of his first season. "It was a scary thing to be a truly mobile theater company."

But in a plot twist in February, it was a venue that found TheatreLab.

Matt Bauserman, who owns a building in downtown's burgeoning arts district, contacted Gray after reading about his involvement in the theater company. Would TheatreLab consider renting the first floor of the empty building at 300 E. Broad St.?

The corner building with a mid-century modern facade had housed a Hofhimers' shoe store in the early 1900s when the 300 block of East Broad was a shoe destination: It was flush with the Douglas, Rice and Sorg shoe stores and the Walk-Over Boot Shop.

Gray and his TheatreLab co-founder, Managing Director Annie Colpitts, investigated. And while they decided the first-floor ceilings were too high and its windows too large, the basement spoke to them. Its 3,300 square feet of mostly open space, exposed brick walls and unforgiving concrete floor exuded a raw energy that fit their still-evolving, institutional self-image. Plus, the space easily could hold 75 seats, the ceiling height could accommodate theater lighting, and there's direct access onto Third Street through an outdoor staircase. And while nobody would accuse the interior space of being wide, additional space had been excavated under the Third Street sidewalk, an underground nook that was perfectly sized for a "tech booth," the essential nerve center of any performance.

"We found it scary how perfect it was," Colpitts says of the space.

"It was simultaneously exciting and terrifying," Gray adds, his cobalt-blue eyes widening at the memory of signing a five-year lease, "That was not in our five-year plan."

Gray, 26, a graduate of Goochland High School and Radford University, and Colpitts, 24, a Sweet Briar College grad from Norfolk, got hooked on theater as teenagers. In 2011 they met at the Firehouse Theatre, where Colpitts had recently become general manager and Gray was stage-managing a production of "Why Torture Is Wrong and the People Who Love Them."

"Annie and I had similar ideas of empowering young artists and how to develop ensemble-based theater," Gray says. But there were differences too. "We're perfect opposites," he says. "I'm in the clouds and she's on a sheet of paper, but we're both 150 percent passionate about every show we do."

He initially conceived of TheatreLab in collaboration with the Firehouse as a platform and safe place for young theater professionals to tackle work where it would be OK to fail. "Speech and Debate," was presented in March 2012.

The following summer, "Trojans" played the Firehouse on the set of a main-stage production. The story was set in a post-apocalyptic world where women don't exist. "It created a lot of conversation," Colpitts says. "Vaginal ultrasounds were in the news; there was controversy over men making policy about control of women's bodies."

And that fall TheatreLab presented "The Antigone Project" at the Firehouse and "The Life of Hannah" at Gallery5, an art space in Jackson Ward.

"Buzz was growing," Gray says of the company's efforts. And he and Colpitts were intrigued by the spike in other cultural activity locally.

"There was so much talk about Richmond being a destination city and we wanted to be a part of that," he says. Perhaps it was time to go independent. "It was a big leap of faith," he recalls. "When the training wheels come off, will we wreck or take off?"

In March 2013 it produced its first play as an independent company, "Riding the Bull," at Gallery5. It was followed in July by "Exquisite Corps" at the Dogtown Dance Theatre in Manchester, and "Speech and Debate" in collaboration with the Richmond Triangle Players in August. Last fall, TheatreLab launched its first full season, which included "See Jane Quit, "Grace," "Closer" and "Time Tells."

The company's second season opens Oct. 24 — its first in the Basement, as Gray and Colpitts have branded their permanent space — with "Hedwig and the Angry Inch." The musical, which is enjoying a successful run on Broadway, plays through November. It will be followed by "Mr. Winter and the Frosty Flakes," "Oblivion," "When Last We Flew," "Cock" and "The Altruists."

It's a race to ready the venue, but a recent $20,000 capital campaign has been extended with a Countdown to Hedwig Facebook and website push. "Every penny at the moment goes into the building," Colpitts says. "Updating the electrical systems, bathrooms and accessibility are priorities."

"If the space isn't ready, that's OK, too" says Gray, laughing. "It's a lucky accident we chose 'Hedwig' for our opener because it really fits the brick-walled and concrete aesthetic of our new space." S