How Chesterfield and school systems across the country are skirting federal laws to avoid educating the disabled. 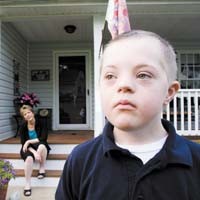 After fighting the Chesterfield County Public Schools to restore her child's basic civil rights, an out-of-court settlement should have meant a happy ending for Anna Long.

Instead, it opened another sad chapter for Long's daughter, Adriana, a rising sixth-grader with profound physical disabilities at Swift Creek Middle School. The school system, Long says, is still working hard to deny her daughter an education.

“It's starting all over again,” says Long, shuffling through boxes of documents collected during the yearlong legal battle. “We're not going to let it happen again.”

Indeed, Adriana's past troubles at the school took on epic proportions. A child with severe disabilities — her many conditions include brittle bones and skeletal deformities that restrict range of motion and leave many of her vital organs unprotected — Adriana suffered various medical setbacks and underwent multiple surgeries while attending Swift Creek Middle.

On at least one occasion, Long has documentation of an attempt by school officials to rediagnose or upgrade Adriana's condition to justify decreased services.

While the case was being litigated, court records show, the school district attempted to prove Adriana's condition was not as dire as claimed — in one instance, forcing her to perform sit-ups — resulting in visits to the emergency room.

The settlement was supposed to allow Adriana to go back to school with the assistance she needed. Now, the district has backed away from what it promised to Adriana, Long says, and she can't afford further legal remedies.

The Longs aren't alone. Adriana's case offers a glimpse into a nationwide pattern of intimidation of parents and denial of rights by school districts, which is beginning to catch the attention of federal lawmakers.

In Long's case, it starts with a simple question of semantics: What is an aide?

Long won't talk about her out-of-court settlement with the school system but says her daughter received a full-time, one-on-one aide to assist with Adriana's profound physical disabilities. But now the school district is balking at providing an aide to assist Adriana, and instead is only offering to provide an “adult assistant” — in other words, it won't promise a full-time aide with training to deal with children with special needs.

“They're trying to provide her with less than they provided before,” says Judith Greenberg, founder of Maryland-based School Finders and a national educational advocate and expert witness who represents parents all over the country. “I see it as an attempt to slowly erode what they agreed to in the settlement.”

The Chesterfield schools avoidance of written promises to Adriana is well documented. In an Oct. 20, 2006, e-mail obtained by Long's lawyers during the suit, Carolyn Urban, the county's then-assistant director of special education, tells a Clover Hill Elementary administrator that “you should would [sic] refrain from putting anything in writing.”

And just eight days before Urban's e-mail, Mike Asip, the county's director of exceptional education, warns administrators that the Long family will seek guarantees of a one-to-one aide “which we must refuse.”

Adriana's case is not isolated.

Last month, Priscilla Greene attended what she vowed would be her final Chesterfield County School Board meeting to give its members a piece of her mind.

Green's battles against Chesterfield began not over denial of services, but instead over what she believes is another attempt to deny rights to her child, who suffers from Down syndrome.

Coleman, an 11-year-old with no history of violence, repeatedly has been physically restrained by Chesterfield teachers and administrators. In one instance, Greene witnessed the restraint — a teacher she was talking with in a hallway suddenly dropped Coleman into a restraint hold before her disbelieving eyes. But there are other instances —more than a dozen instances of restraint and 20 or more instances of seclusion — she's uncovered only by obtaining internal memos and documents between school staff and administrators about her child.

“They think they're untouchable,” says Greene, whose son now attends a private school for special-needs children, which the county is paying for, at a cost of nearly $6,500 a month.

“This is so devastating,” she says, labeling the school district's treatment of disabled children cruel, its policy and actions regarding restraint potentially illegal, and the fact that those regulations seem to be applied only to special-needs children a violation of civil rights.

“To me, this is discrimination,” she says. “You can't hold a [discipline] policy for a certain body and not for the rest.”

It would seem others may agree.

Last month, Congress convened investigatory hearings on use of seclusion and physical restraint on children, prompted by a number of nationally publicized pupil deaths and injuries. The investigation may soon expand to examine a disturbing trend allegedly uncovered during the hearings: willful retaliation by school districts against parents of children who speak out or advocate for their children.

Preparing for the hearings, the Virginia Department of Education in April completed a report on localities' use of seclusion and restraint on special-education pupils. Among concerns were that many school districts lacked any policies for when to use restraints. Chesterfield was among the few that did have such policies, but what Greene discovered in defending her son is that the policy was developed by the state specifically for students with emotional disabilities, and that it's since been applied generally to all disabled students.

The state report found that many school districts avoid adopting policy as a matter of legal self-preservation.

“Several school divisions said their school board attorney or the [Virginia School Board Association] advised them not to establish a policy, regulation, etc. … on this issue,” the state report says, giving the reason from five school board lawyers as concern that adopting such policy “is giving the potential plaintiff a standard against which the [school system's] action can be judged.”

In other words, “preserving the school division's immunity defense is critical,” the state reports.

That self-preservationist technique — used both in creating policy as well as in agreeing to provide services to pupils such as Adriana — is endemic to Chesterfield and to school districts statewide, says Kandise Lucas, a special education advocate for parents in Chesterfield and Henrico counties.

The reason, she says, is simple: “The bottom line is about the bottom line. If they can avoid paying out money for special-education needs, they're going to avoid doing it.”

And there's very real financial incentive to such avoidance. The federal government provides additional subsidies for pupils classified as having special needs, but that money rarely is enough to cover expenses associated with the services such children require.

“The biggest issue we have is [school officials] are being told don't put it in writing,” Lucas says. “The school districts are trying to do just enough to get by, but in the process they're breaking the law.”

Lucas, an advocate for scores of Chesterfield and Henrico parents, says the tide will turn against districts that systematically seek to limit services.

“Passing the [federal special education] laws was the first step, but the hardest part is getting the districts to enforce the laws,” she says. The current congressional hearings, she says, could eventually lead to a broader civil rights investigation.

One reason there's already not outcry over civil rights issues, Lucas says, is money. Civil rights organizations, she says, are “nervous about taking on [school] districts and the financial obligation.”

This nervousness gives districts the upper hand, she says. In Priscilla Greene's and Anna Long's cases and in others, it's left parents fighting alone for their own children's rights rather than shoulder-to-shoulder for reform.

“They bully us and tell us don't say anything and we'll give your child tutoring or give her civil rights back,” Long says. “And they know that most of us are scared and will be quiet.”  S