With just a few days to spare, Richmond Ballet's 30th season starts with a case of life imitating art. 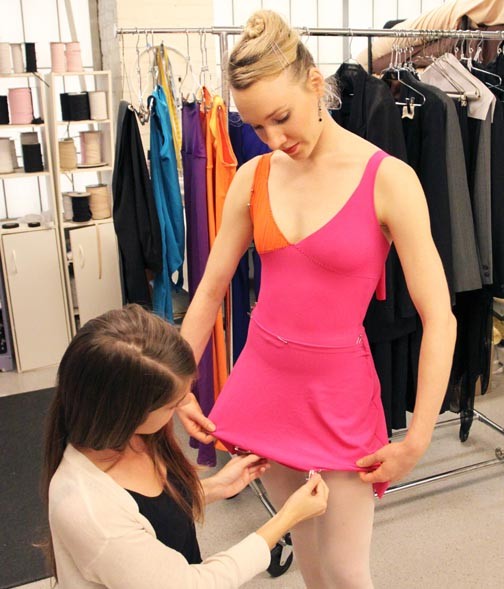 The shop where costumes are made for Richmond Ballet is much what you'd expect: Dressmaker dummies stand by tables of sewing machines. There are bolts of fabric, a radio playing softly and racks of costumes in various stages of completion. There's also a relentless creative process bound to getting things exactly right — no matter what.

"It's great to come down [to Richmond]," Hynes says. "They're a very talented crew of makers and great dancers. And I love working with Philip."

Richmond Ballet company dancer Lauren Elizabeth stands with them in front of a large mirror, stock-still, arms gracefully arched from her sides. Hynes and Neal discuss where they might accent her fuchsia leotard and skirt with orange mesh. Seams are discussed. Neal wants the skirt a bit shorter. There's a perfect length and they work to find it. Finished, Elizabeth leaves, saying she wishes she could wear her costume to class. "I know you're happy," Neal tells the smiling ballerina.

"We watched the rehearsal, and while it was something sort of lovely to look at," he says of the brightly colored costumes, "all of sudden you could see green connecting to orange connecting to purple — my choreography started to look mechanical. It was like a magician not having a sleight of hand and being able to see the mechanics of their trick."

What worked as a concept was too much for the intimate setting of a Studio Series performance, where the audience is close to the dancers. Stoner Winslet, founding artistic director of Richmond Ballet, asked Neal what he wanted to do. "I couldn't bring myself to say it," Neal says. "For me to let the words pass my lips was excruciating."

What Neal wanted was to ditch the colorful costumes made for "Phoenix Rising." His decision, which Winslet deems "courageous," isn't unprecedented. Hynes talked to Neal by phone several times during the difficult process, supporting him. "In all my years with New York City Ballet," she told him, "it's not the first time this has happened. The choreography has to shine."

And so they decide to ditch the colors, going with just leotards and tights in a clean palette of gray and white.

"I said to Holly [that] I think it's life imitating art," Neal says. "For me, this ballet is about struggle and overcoming it, and using the struggle in a positive way. And that's kind of what is happening right now. It's not a bad thing; it's just a new experience for me, and one I'm grateful to have at Richmond Ballet and nowhere else. Because that's what Stoner wanted to create with the Studio experience. She wanted people to come in and take a chance and experiment, and I'm grateful I'm with my long-term collaborators like Stoner and Holly so I can take a chance. And if it isn't exactly what I want, they can help me get there."

In the end, Neal feels empowered by the process. "I kept saying to the dancers Friday night: 'It's not you. You are doing everything you need to do. I need to create a cleaner more elegant slate so I can see what you are doing.' They had concern in their eyes for me — I don't think about the ballet — but for me, and for Holly — that we were OK. But we're better than OK."

When the dancers take the stage for the world premiere of "Phoenix Rising," the costumes designed by Holly Hynes will stay on their hangers. But not for long. "Those costumes will have another life, believe me," Neal says. "I'm already thinking of what concept will work because I love them." S

The world premiere of "Phoenix Rising" runs through Oct. 6 at the Richmond Ballet Studio Theatre. For information visit richmondballet.com.