Parents struggle to balance needs for children with autism during the pandemic. 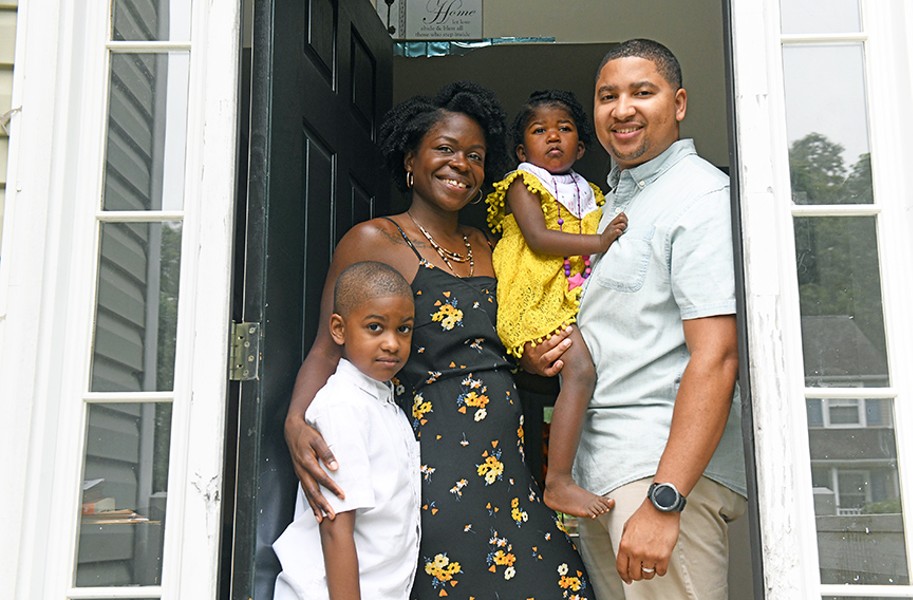 Scott Elmquist Nyesha Nicholas with her husband, Jiqoy Nicholas, their 6-year-old son, Josiah, and 3-year-old daughter, Joy. The family is considering whether public school or the Faison Center, which runs a private school specializing in autism services, would be the best place for Joy to attend kindergarten.

Parents often lie awake at night questioning the decisions they make on behalf of their children. That applies even more during a pandemic that requires caregivers to balance work and helping their children through distance learning, day care closures and protection from virus exposure.

But for families of children with autism, the pandemic calls for even more sacrifices. Meeting the educational needs of students with autism – a developmental disorder that causes variable difficulties in communication and behavior and is often accompanied by learning disabilities – can be difficult via distance learning, autism experts say. And for many families, specialized care is often unaffordable, says Ann Flippin, executive director of the Central Virginia Autism Society. The organization provides educational and advocacy resources for local families of children with autism.

“Our families have worked with their [special education] teams to make game plans for ways to best support their children this fall,” Flippin says. “Many asked for in-person options due to the challenges that come with caring for children with complex needs at home, and for fear of regression in social and academic skills. And many of our caregivers who work outside the home do not have access to specialized child care, so they are finding themselves in tough situations.”

Medicaid developmental disability waivers that grant care for individuals with disabilities have been “a lifeline for families,” Flippin says. But over 13,000 Virginians are on waiting lists, a problem that has grown more acute during school closures.

Children with autism are often more impacted by pandemic-related schedule changes because they thrive on routine. Social isolation imposed by quarantine and reduced access to behavioral, occupational and speech therapies has led to regressed speech and social skills for many children with autism, Flippin notes.

“Their support systems, outings and activities have been ripped away from them, and change is really hard for people with autism,” she says. “They often can’t express it, so it comes out in meltdowns.”

Also families of Black and brown children with autism are additionally impacted as the Black Lives Matter movement brings attention to the fact that unarmed people of color with cognitive issues are often perceived as a threat during police responses, Flippin says.

Area school divisions are installing plans to prioritize students with special needs for in-person instruction, a decision welcomed by many families of children with autism but feared by many of these parents due to virus risks.

“We know there’s a pandemic, but we know that she has a need that can only be met when she is in-person, in a very hands-on environment,” Nicholas says.

Joy was able to continue receiving behavioral support through Faison Center’s early education program. The center, which provides educational and care support to adults and children with autism, opened its private school, which runs from kindergarten through high school, in August with new precautions. A rotating schedule is being used to reduce the number of students on campus.

Receiving as much in-person instruction as possible during school-age years is necessary for many of Faison’s students, says Adam Warman, an administrator.

“The population we focus on has the most significant need,” Warman says. “There’s a set period of time that they are entitled to school services and once that time is gone, it’s gone forever for that individual.”

Time is a precious resource for families of autistic children. Some of these parents generously shared their stories with Style, as well as their hopefulness and resilience, all of which are required to raise children during a pandemic and national social unrest.

Whenever Tonicka Edwards-Booker animatedly sang nursery rhymes to her son Rashad during toddlerhood, he would grin and his large, brown eyes would shine with recognition. But at the age when most toddlers would begin to oink or moo to “Old McDonald,” Rashad was strangely silent.

“I always sang the nursery rhymes and he would laugh and giggle, but he wouldn’t catch on and start singing along with me,” she says. “I was like, ‘OK, you like the song but you’re not saying anything.’” 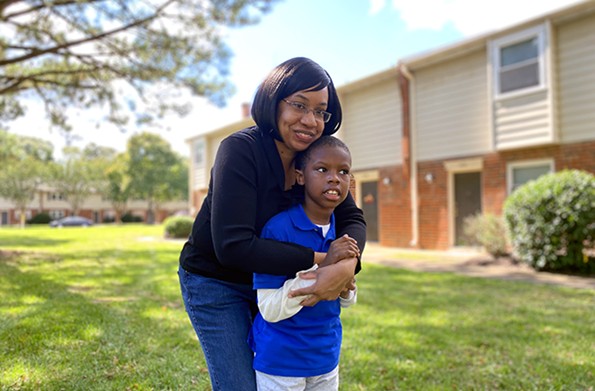 Rashad, who is still nonverbal at 7, was diagnosed with autism at 2, following a referral to a developmental psychologist by the family’s pediatrician. Rashad can communicate basic ideas by pressing buttons on a communication device and continues to improve his social skills at school and with afterschool behavioral therapies provided through a private service. But the pandemic has put more pressure on the pair’s already full schedule. The single mom spent the first few weeks of school juggling day care pickup and a work commute over an hour away from their Chesterfield apartment, with Rashad’s online learning, dinner and in-home therapy.

“I try to fit in that little bit of family time,” she says.

Booker moved to Chesterfield from Phoenix, Arizona, shortly after Rashad’s diagnosis and says she struggled to find a day care that could care for a child with his needs. She adds she is fortunate the center has stayed open to serve essential workers before Rashad returned to school at the end of September.

“I don’t know what I would have done [for work] if the day care wasn’t open,” Booker says. “I send my heart out to all of those people who couldn’t bring their children in.”

As the parent of a Black child with autism, Booker says work, school and the virus are not the only concerning current affairs. Global calls to end police brutality have brought attention to the deaths of unarmed people with disabilities and men of color in police custody. Elijah McClain, an autistic young Black man died after police in Aurora, Colorado, restrained him in a choke hold following reports of strange behavior representing a parent’s worst fear.

With Rashad’s future in mind, Booker says she signed a petition to push state representatives to establish the Marcus alert, which would require mental health professionals to work with police to respond during possible mental health crises. The system is named after Marcus-David Peters, a 24-year-old biology teacher from Chesterfield who was shot and killed by a police officer during a mental health crisis.

Booker said she hopes crisis response teams will use the alert to deter unnecessary killings of people with autism and mental illnesses and says it’s a positive step toward better protecting people with autism from police brutality.

“I wonder how soon teams could be there and if the cops will stop and pause and think, do we have someone under this umbrella that is mentally disturbed?” she says.

Returning to school this fall potentially threatens the health of one of Kate and Gary Fletcher’s three sons with autism: Nine-year-old Wesley, who has a co-occurring autoimmune disorder. The Fletchers worry that due to difficulties with online learning, the brothers will continue to regress emotionally, socially and academically.

Wesley and his brother, Matthew, 12, have been back in class since Chesterfield County schools reopened in September. The couple is searching for a private day care offering autism behavioral support for their youngest son, 6-year-old Henry.

“[Wesley] has been so much healthier staying at home, but we need one-on-one school supports to keep him from regressing further than he already has,” Kate explains. “But exposing him to environmental or viral triggers can set off a terrible [brain inflammation] flare. I feel like it’s a lose-lose proposition.” 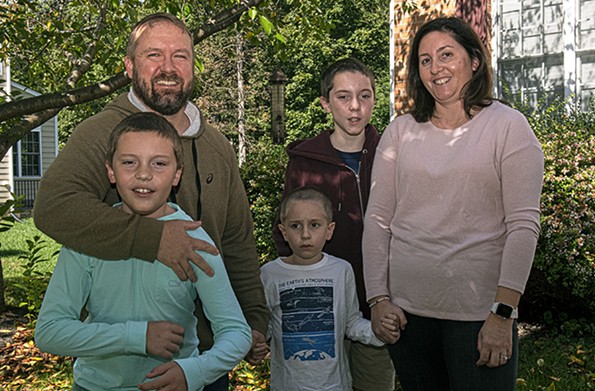 Pandemic-related routine changes caused Wesley to develop debilitating compulsive behaviors. He would bite himself, hoard food and have incontinence issues.

“There were times when you’d get to the end of the night with Wes and he was so upset, and I would go to bed crying,” his mother says, adding that she sometimes feels like she’s exhausted everything. “And now we’ve pulled in prescription meds to try to help [him], and it still seems to not be getting through.”

Fletcher’s mother, who lives in the home, helps with the boy’s care when she can. Matthew also receives 30 hours of care a week through the state’s Medicaid waiver program, which provides long-term care for people with disabilities. Without that attendant care, Kate would’ve had to quit her job, “and we needed my income,” she says.

Both Henry and Wesley have been denied for the same waiver, and all three boys are on a waiting list for another Medicaid waiver specific to developmental disabilities, funding a range of services including adult residential care. Providing appropriate care throughout their children’s lifetimes is a perpetual concern, Fletcher says.

“If they don’t have a spot by the time they finish their schooling, I really have no idea what we are going to do,” she says.

“It’s not like insurance covers day support, so, that’s where I’m concerned. Right now, they have school, they have somewhere to go – but after that, then what?”

Carissa Garabedian, a Henrico mother of a 17-year-old son with autism named Marky, wants other parents of children with special needs to know they are not alone.

So she used her marketing and writing skills to create KnowDifferent, an online resource tailored to families of special needs children living in Central Virginia. For over three years, KnowDifferent has served as an educational and information resource for families, as well as a place to share stories and find meaning in the experiences of others. 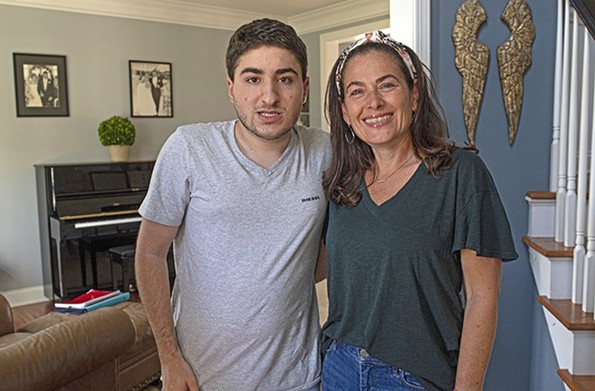 “As special needs parents, we are always trying to figure out how and where our kids fit in,” Garabedian says. “It’s so important to know that our kids are ‘knowdifferent.’”

Those who know Marky say that he is kind [and] doesn’t know how to lie, Garabedian says. A favorite past time for him during the pandemic is completing 500-piece puzzles mind-blowingly quickly, without looking at pictures.

Since Henrico Public Schools closed in March, Carissa has been guiding Marky through digital learning. Due to his needs, she has put aside her work on the website to provide the educational and care support that would normally be offered during the day at school. It’s a responsibility that leaves her feeling isolated and drained. And it’s likely Marky will continue digital learning because his father, Mark Garabedian, is a physician, which opens the community to virus exposure, she says.

“I’m fried, I have nothing else to give at the end of the day,” she says. “My energy is absorbed with my son.”

For encouragement, “I tap into my special needs mom friends,” she adds.

A seemingly simple trip to the grocery store can be difficult for children with autism, who can be highly sensitive to sensory stimulus, such as the feel of a facemask or jarring lights and sounds. Garabedian suggests grocery stores consider offering a weekly “sensory friendly” shopping hour with lowered lights and music.

Adjusting to digital therapy and education has been a huge challenge for Garabedian and her son due to the level of guidance he often needs. But a positive of the increased time at home has been allowing Marky to focus on time management skills. Garabedian has also learned more about her son, which can be difficult due to his communication challenges, which often lead to short answers to open-ended questions.

“I’ve seen so many of his strengths and weaknesses,” Garabedian says. “I’m grateful I’ve learned more about my son because when he got home from school, all I got was ‘my day was great.’”

She’s managed to find a silver lining in this stressful pandemic year and believes other parents in similar situations have too.

“I’m sure it helped so many families see so much about themselves and their children that they didn’t know.”