Even if you haven’t heard of it, you’ve probably tasted koji. 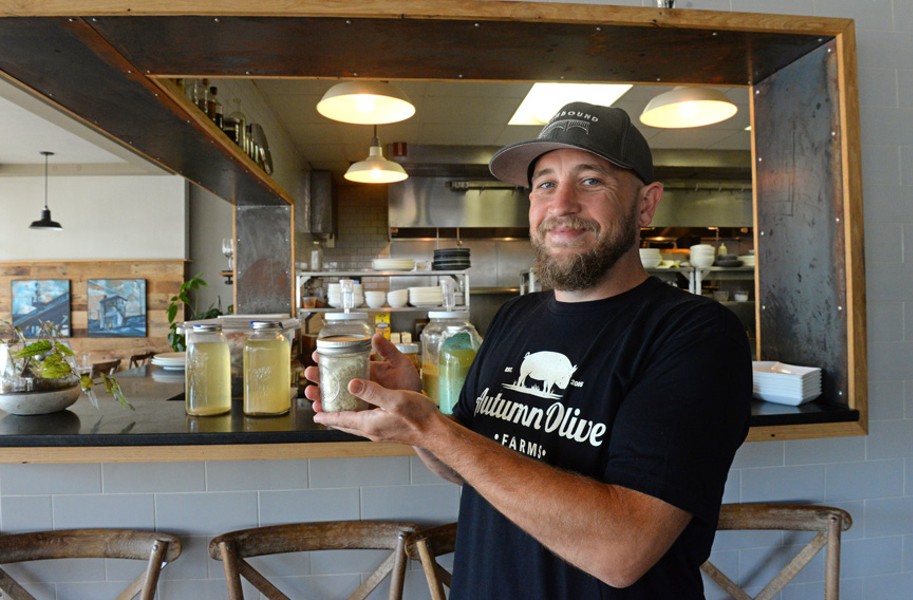 Scott Elmquist Southbound’s Craig Perkinson is one of several local chefs using koji, a mold that takes to white rice.

Craig Perkinson leans in like someone might hear all his secrets. We're the only people at Fine Creek Brewing Co. in Powhatan — Perkinson, chef at the award-winning Southbound in Richmond's South Side, Fine Creek head brewer Gabe Slagle and I.

We've already tasted their first collaboration beer, Hedorah, a koji brut pale ale. We're about to taste the second. Slagle says the new concoction is flying out of his brewery, but he wonders if consumers understand exactly what went into it. An arresting pass of respect is being volleyed from Perkinson to Slagle, along with timetables and chemistry. It's tough to grasp.

Then Perkinson says: "It's mold," with a smile and a little hop, a nod from Slagle. They apparently have handed me the keys to the kingdom.

If you consider yourself a foodie — or just someone who keeps up with the restaurant, brewery and bar scene in Richmond, in case the word foodie gives you the creeps — you've likely come across koji. Local chefs have started smearing it on steaks and poultry, mixing it in salad dressings and brewing it in beers. The method isn't new, though.

Koji fungus, or Aspergillus oryzae, is often the reason behind a delicious flavor that you can't quite put your finger on. The koji spore creates mold and with that mold comes umami, the fifth flavor profile that gained prominence more than a decade ago.

The process behind koji is simple, but complicated to explain. A basic fermentation formula is water, sugar and yeast make alcohol. Koji comes into play by making sugar from starch. The spores take easily to rice, eating through that starch like Pacman.

Perkinson isn't the only chef riding the koji train. Andrew Manning of the recently opened Longoven, who should get some credit for reigniting local interest in using koji, says it started with a desire to better himself and give his food "more depth in flavor, more complex structure." He gets his rice koji from an industry friend, and he notes that it's self-sustaining.

"Spores will keep forever, like a mother almost, so you can keep the koji rolling forever," Manning says. "Every batch I make, I force a third to spore."

Brittanny Anderson of Brenner Pass and Metzger Bar and Butchery calls it a "surprise flavor."

"It gives underlying notes of funkiness and umami that make you go 'What is that?'" Anderson says. She does warn it can be too much. "I think it, like lots of other trends, is a useful tool when used correctly and in moderation."

Perkinson isn't ready for moderation when it comes to koji. He says he's gotten to the point where he's "not quite as obsessed," but he hasn't yet gotten tired of talking about it or experimenting with it.

"I used to sleep next to the koji," he admits. "My girlfriend called it my koji baby."

At Fine Creek, the second collaboration is coming along. It's been aging in barrels for several months now. As the two swirl, sniff and stare, they start their comfortable back and forth again: "It's got some mushroom characters it didn't have last week," Slagle says, and Perkinson adds that it'll go "perfectly with a lamb dish."

Slagle and Perkinson will flex their collective koji muscles later this month with this new beer release. That is, if Perkinson doesn't snap up the entire load for Southbound. S