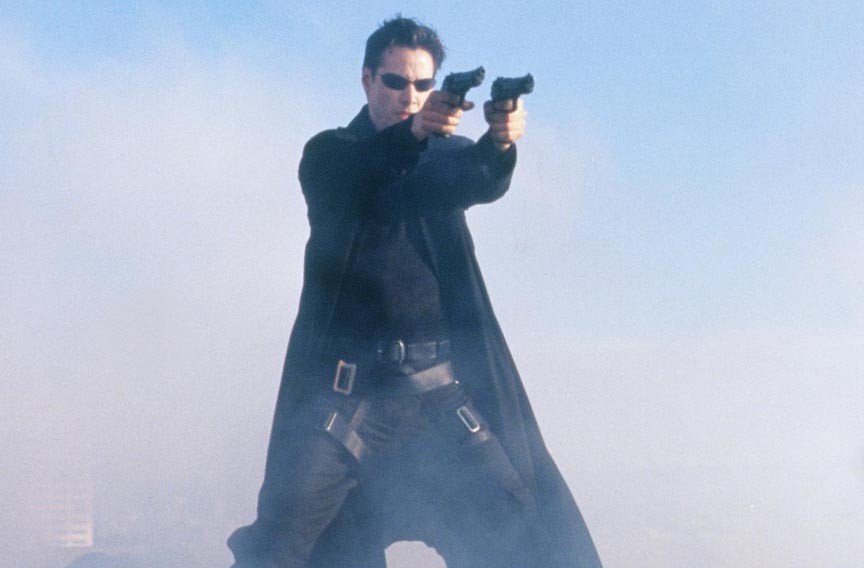 Looking at Keanu Reeves' dark and iconic coat from "The Matrix," your first thought might not be about how well that costume would work with the choreography. But to a costume designer, it's a different story.

"It's all about the length of the coat and how the coat moves. Those are very important elements here because of the martial arts involved," says Toni-Leslie James, director of Virginia Commonwealth University's costume design and tech program and winner of a 2009 Obie for sustained excellence in costume design.

If creating an iconic image is job one for a costume designer, making it work within the film's context — in this case, extensive fight choreography — is a close second.

"Hollywood Costume," organized by the Victoria and Albert Museum in London, arrives at the Virginia Museum of Fine Arts on Nov. 9, making its only East Coast appearance. More than a hundred costumes from a century of filmmaking were chosen from private and archival collections in California, most never publicly displayed or seen outside of a studio.

"Film design is so beautiful because you get to put more detail in," James says. "All the little details show on the screen, unlike in a theater production where the scale has to be different so people are able to see from the nosebleed seats."

Along with recognizable costumes from films such as "Gladiator," "Superman" and "Titanic" are costumes from films set in the present day, often more challenging to a designer. "Fantasy and period costumes always get nominated for Oscars and rarely does a movie with modern dress win," James says. "But the hardest thing to do is realistic films like 'Brokeback Mountain.' The costumes should be so ingrained in the visuals of production that you don't notice them. This is a type of costume I really love. It focuses on capturing the essence of realistic characters in a particular place and time."

One thing that becomes clear looking at the costumes in the show is how period details are frequently seen through the lens of the time the film was made. One of the gowns worn by Barbra Streisand in "Funny Girl," a film set during World War I and just after, is an exquisite Irene Sharaff creation with an empire-waist worn with a very '60s bouffant. "They're very beautiful and very of their time," James says, laughing.

Similarly, the Batman costume from "The Dark Knight Rises" bears almost no resemblance to the knit costume worn on the '60s "Batman" television series. "They had to modernize the costume to convey the time," James says, pointing at the exaggerated musculature built into the costume. "He's become a video-game hero figure at this point."

Costume as source of cultural change is ably demonstrated by Marlene Dietrich's tails and slacks from the best-known scene in the 1930 film "Morocco," where she kisses a woman. "When I look at this costume, all I see is the beautiful tailoring," James acknowledges. "But this outfit made it acceptable for women to wear those kinds of pants."

She says that sort of ripple effect from a film's costumes perhaps is best exemplified by the effect "Annie Hall" had on women's fashions in the late '70s, ushering in an era of multiple layers of oversized blazers or vests with men's ties, baggy trousers and long skirts.

"As soon as a film starts, the costume designer's job starts — to begin telling the story," James says. "Costumes establish the story first."

Through such wide-ranging movies as "Fight Club," "Flash Gordon," "Moulin Rouge" and "My Fair Lady," visitors to "Hollywood Costume" will be able to see the clothes worn in a variety of their favorite films old and new — only this time, up close and personal.

"I think it's the best show since FIT did the Bob Mackie exhibit," James says of the comprehensive 1999 retrospective by the Museum at the Fashion Institute of Technology in New York. "This is a tremendous thing for Richmond. Events like this show are so important to our development as an arts community. It's all part of the new Richmond. This show is the sort of thing that makes Richmond important."